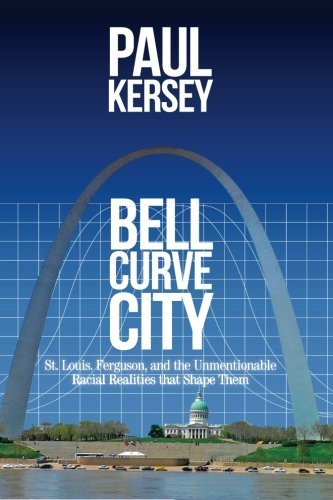 PK Note: Pick up a copy of Bell Curve City: St. Louis, Ferguson, and the Unmentionable Racial Realities That Shape Them. You might learn something about St. Louis…

Suspects in which the race is known of the offender are all black (of the 47 victims, four have been white, one Hispanic and the rest black).

Why mention this? Well, it seems the coronavirus is impeding the rollout of a crime reduction campaign called “Cure Violence,” a taxpayer-funded initiative where former criminals go into the community of St. Louis to convince current criminals to disengage from violence and stop killing people.

LOUIS, Mo. – “You Paid For It” investigator Elliott Davis learns that the coronavirus crisis is delaying the implementation of an anti-crime program called Cure Violence. The Board of Aldermen appropriated $5 million for the program that’s supposed to cut homicides as much as 50 percent. But the city has been slow in getting the program put in place.

A contract has been awarded to a company to hire workers for Cure Violence but the workers are not hired yet. Meanwhile, murders in St. Louis are up about 23 percent from this time a year ago.

The Krewson administration says right now they’re focused on dealing with slowing the spread of COVID-19. It seems that Cure Violence is taking a back seat right now.

Board of Aldermen President Lewis Reed says the program should have been put in place sooner. He says the city can’t use coronavirus as an excuse when it could have gotten the program up and running before the crisis hit.

Mayor Krewson’s spokesman said that even if Cure Violence had been put in place before now it more than likely would have been slowed by the social distancing and stay-at-home orders.

Right now no one is sure when Cure Violence will be up and running. A representative for Mayor Krewson’s office says it all depends on what happens with the pandemic.

Or is it structural inequality? Or redlining? Or implicit bias? Wait, isn’t it white privilege?

Maybe just call it environmental racism and be done with it?

Of course, noting segregation (white people voluntarily deciding to live in communities devoid of blacks) might be keeping whites safe from black violence and the coronavirus is something we aren’t supposed to consider.