Cordoba: Then and Now

To many Americans of a certain age, the word ”Cordoba” has the association of a Ricardo Montalban car ad from 1975. It was memorable for being over the top in its kitschy commercialism.

To Muslims, however, Cordoba means a historic conquest of part of the Western world, so using that word to name the Ground Zero mosque indicates a stealth message of triumphalism, not bridge-building with us infidels. That historical fact is pointed out in a fine photo-essay by El Marco about the controversy: 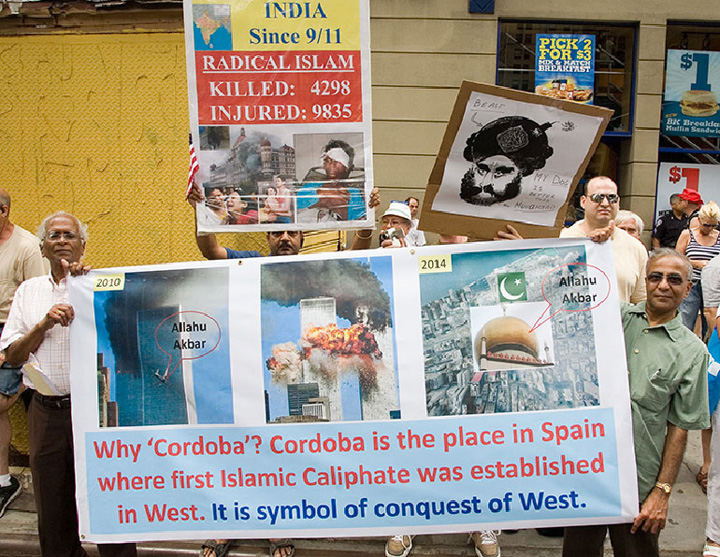 Imam Rauf originally named the proposed Islamic center/mosque Cordoba House. That name has historic significance for Islamists. It refers to Cordoba, Spain, which was occupied by muslim invaders for three centuries. After 800 hundred of years of war, Spanish armies forced the muslims out of Spain in 1492. While occupying Cordoba, the Islamic conquerers built an architectural wonder of a mosque over that city’s main Catholic church. Muslims have vowed ever since their expulsion to retake Spain, claiming that it is their rightful Islamic land. OnceÂ muslim, foreverÂ muslim.

The greatest domed church ever built in Christendom, the Hagia Sofia in Constantinople, was converted into a mosque after the fall of that city toÂ muslimÂ forces in 1453. In India, countless Hindu temples were razed and their stones used by muslimÂ invaders to build mosques which still dominate ancient Hindu holy sites today.

To be fair, one must acknowledge that this is exactly what Constantine the Great and later Roman emperors did, after considerable bloodletting, when they replaced pagan temples with Christian churches. The Spanish in the New World also built many churches on the sites of Mayan, Aztec and Inca temples. This is one aspect of supercessionism.
SupercessionismÂ has no place in the modern world, and should be seen for what it is: an ancient pretext for conquest that should be banished to the dustbin of history.

But modern Islamists don’t see it that way. In 1999, in Nazareth there was an attempt to build a huge mosque directly beside the Church of the Annunciation. MuslimsÂ bought up adjacent land, and with Israel’s approval, began building a mosque whose minarets would tower over the Catholic church. This caused an uproar from Christians worldwide and led Israel to rescind construction permission in 2002. In the Nazareth case most Islamic leaders were also against the project.

In 2008, the English people were shocked to learn that land had been purchased to build Europe’s largest mosque adjacent to the 2012 Olympic Stadium in London. Public opposition against the proposed mosque was so great that planners ”missed some deadlines” and finally ”let the idea die”. This brings us to the Burlington Coat Factory, site of the proposed Ground Zero mega-mosque.

Did Imam Rauf imagine he could pull the jihadist wool over the eyes of uncurious Americans? If left to the craven MSM, he might have succeeded, but the internet has created a new media world where little can be hidden.

In fact the more Americans learn about the truth of Islam, the less they like it. A CBS poll published recently August 25 found that a mere 24 percent of Americans have a favorable impression of Islam while 39 percent have an unfavorable opinion of the religion. Liberal talking heads now squawk at length about the fake danger of Islamophobia, but the daily news of Muslim actions taken in support of universal Islamic hegemony are a relentless drumbeat of bombings, beheadings, attacks on Afghan schoolgirls, honor killings, religious wars, etc ad nauseum. The expression of a Religion of Peace is hard to find.

If you aren’t reasonably fearful about what Islam intends to do to the world, then you aren’t paying attention.