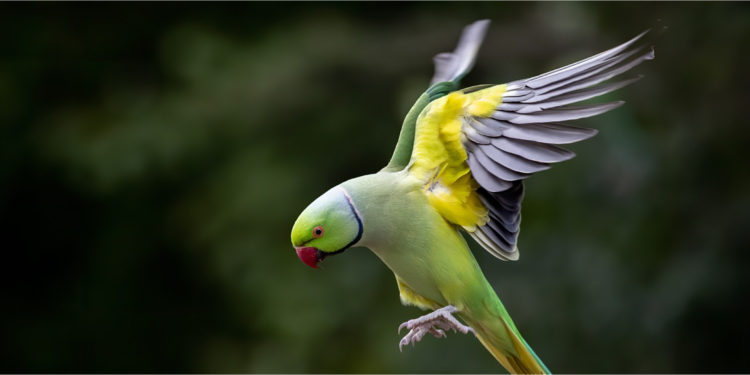 A long-time reader points to this Daily Mail article on a British brouhaha:

A move to shoot ring-necked parakeets to cut their numbers has been branded 'racist' by wildlife experts.

Natural England yesterday announced that from January it will relax rules protecting the exotic birds.

The birds have been blamed for destroying crops and bullying smaller native species in the hunt for food and nesting space.

But London Wildlife Trust said there is 'little evidence' that a cull of parakeets - with their bright green plumage, red beaks and ear-piercing screech - is justified.

It added that parakeets, which originate from the Himalayas, are 'as British as curry' and represent the London's cultural and historical diversity. ...

With up to 40,000 of the wild parrots thought to be in London and the South-East, in areas such as Richmond Park, it feared that they could soon outnumber native species in the way that the red squirrel population has been dominated by grey squirrels.

Matthew Heydon, Natural England’s licensing expert, said: ”It’s true that at the present time the scale of this problem is relatively minor.

'That is because the birds are relatively limited in their distribution, but as they spread out of London you can expect the problem to get more severe.

Mr Heydon warned it was not ”open season” on parakeets and said the rules would be tightened if too many were killed. But he said one farmer in Cobham had lost enough grapes in a day to make 3,000 bottles of wine after they were eaten by parakeets.

About 40,000 parakeets are thought to be in London and the South-East alone. Legend has it the birds escaped from Shepperton Studios in Surrey, during filming of the 1951 movie The African Queen starring Humphrey Bogart and Katharine Hepburn.

The rocker Jimi Hendrix is also said to have released two parakeets as an alternative symbol of peace in the 1960s.

Other species also added to the 'general licence' hit-list include the monk parakeet from South America, which can occasionally be found in the northern Home Counties, the Canada goose and the Egyptian goose.

'Non-native species are a major threat to global biodiversity and it is important that licences can operate as an effective tool in helping to tackle the problem,' she said. ...

* No one knows where the UK's wild parrots come from. One theory is that a pair escaped from a container in Heathrow airport. * Since they started breeding in the wild in 1969, the ring necked parakeet has become London's 15th most common bird. * They nest so early in the year - often in January - that they use up the good holes and nest boxes, driving away native species such as woodpeckers. * In Esher, Surrey, one roost has an estimated 7,000 noisy birds. * Also known as rose necked parakeets, they were kept as pets by the Ancient Greeks and Romans. * The birds originate from the foothills of the Himalayas - so can cope with the chilly British weather.

A flock of about a dozen green parrots, presumably escaped pets, flies squawking over my house frequently. The make a pleasant diversion. On the other hand, a flock of about 200 parrots, said to have escaped when a pet store truck overturned on the freeway, took up residence on my aunt's street in Arcadia in the early 1970s and made life almost intolerable with their dawn squawking.