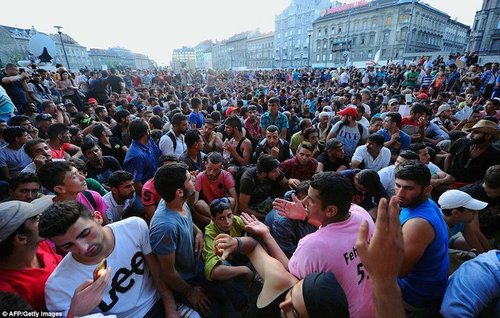 Mike McCaul, the Chair of the House Homeland Security Committee, appeared on Fox News Monday morning for an interview about the big “refugee” mess in Europe that threatens to spill into America. President Obama is on the home stretch of his lawless reign, and he may get generous with admitting thousands of sketchy Syrians to align with his European values of naivete toward historic enemies of the West. Despite the obvious dangers of mass resettlement of Syrians, Democrats and Catholic resettlers want lots of them.

REPORTER GREG JARRETT: You’ve actually been warning about this for quite some time. This in your mind is an opportunity for terrorists

McCAUL: As you know I’ve been over to Jordan to see the refugee camps. We’re a compassionate nation. This is very tragic situation but also I have to have be concerned as Chairman of Homeland Security about the safety of Americans in this country, and the concern that I have is the FBI testified to is that we don’t really have the proper databases on these individuals to get them passed to ensure that we are not allowing terrorists to come into this country. And until I have that assurance I cannot support a program that could potentially bring jihadists into see United States.

JARRETT: We don’t have the intel on the ground, we don’t have the biometric abilities the databases that’s really required to vet these people, and in point of fact I read a letter from you recently to President Obama about this very subject. You pointed out al Qaida successfully exploited the refugee resettlement program a few years ago.

McCAUL: When we had Iraqis come in we had better intelligence on the ground. An Iraqi came into the United States who had killed Americans in the Iraq war. In Syria we have very little human intelligence, if any, so we don’t know who these people are, and I think that’s the bottom line here. Until we know who they are, we cannot responsibly bring them into the United States

JARRETT: Do we know that ISIS has already been able to infiltrate and in fact see some refugee camps in Syria?

McCAUL: We have intelligence reports that the terrorists want to exploit the refugee process to get not only into Europe but also into the United States. In light of that evidence that I have before me, I can’t in good faith support a program that could endanger Americans

JARRETT: As I mentioned you been raising alarms for months. You wrote a letter to President Obama in February asking for concrete answers to your legitimate request you sent another one and did you ever hear from the President?

McCAUL: Absolutely no response and I think that’s very disrespectful to the process. Look, if they want to support this program they have to justify it before Congress will accept this, and I think the state of play right now — again, it’s a very tragic situation playing out — we’re a compassionate nation, but we need assurances were not gonna bring in terrorists into the United States.

JARRETT: Are you happy with the Department of Homeland Security as it’s currently being operated?

McCAUL: I have a lot of concerns. I think in this case, both the Department of Homeland Security and the FBI told me privately that they don’t support bringing in Syrian refugees because of the threat they pose to Americans. I think the State Department obviously wants to bring them in.

The hordes of Syrians et al are not not all refugees: even the UN admits they are 75 percent men. As Conservative MEP Daniel Hannan remarked recently, “I have seen refugee columns before, and they tend to be made up disproportionately of women and children. But more than 80 per cent of the people disembarking here were young men – the classic indicator of economic migration.”

Finally, the Catholic bishops are pushing for more Syrians, even though they cannot be adequately screened. That item turned up at the tail end of a general article about what America should do — the bishops think 100,000 Syrians would be just fine. How very generous of them to endanger America so that Catholic Charities can make more money.

[. . .] Kevin Appleby, director of migration policy at the U.S. Conference of Catholic Bishops, said in an interview that the security worries over Syrians were misplaced, given the intense background checks on refugees.

But more resources would have to be allocated for faster vetting. For example, Appleby said, the United States does not process Syrian refugees from Europe but from Jordan and elsewhere in the Middle East, where most of the refugees are.

DHS and other government officials were not available to discuss the issue on Monday’s Labor Day federal holiday.

Pope Francis is likely to call on America to live up to its values as a nation that provides safe haven during his U.S. visit this month, Appleby said.

The Conference of Catholic Bishops has long advocated for more Syrians to be allowed in and believes the country could absorb 100,000.

“It is do-able. It’s certainly do-able from our end in terms of resettling them in the United States,” Appleby said, pointing to the U.S. absorption of Vietnamese refugees during the Vietnam War. “It’s just a matter of political will.”