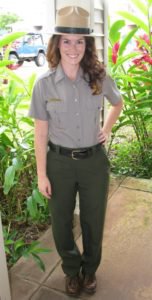 A coalition calling for “more inclusive” national parks says that park ranger uniforms can be “threatening” to Latinos.

A coalition of legislators and civil rights groups say the National Park Service needs to focus on increasing inclusion on public lands, including possibly changing the “threatening” uniforms of Park Rangers. “What we’re calling for is drastic, very scary change,” Maite Arce [Email her] of the Hispanic Access Foundation said at a press conference Thursday.

“One example I can give you is with the Latino community, especially among the border states, but even nationwide, just the simple color of the uniforms that rangers wear.”

Looking at photographs, it appears to me that the park rangers and the border patrol agents have about the same color of trousers but the shirts don’t look the same. 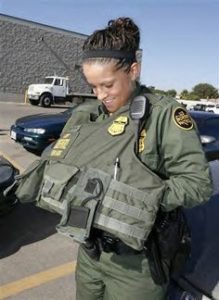 [Pictured above right: lady ranger in Smokey The Bear Hat, pictured right, lady Border Patrolman with hairband and vest.]However, some of the jackets look about the same. But then again, I’m not an expert on subtle color distinctions.

But anyway, why would the color of park rangers’ uniforms be threatening to anybody, except possibly illegal aliens? And somebody who is breaking the law should feel threatened by law enforcement agents.

“It’s such a shame that something as simple as the uniform and it’s [sic] similarity to the border patrols [sic] uniform – in the coloring - could be very threatening to certain segments of the Latino population. So a discussion about that is going to be really tough.” Arce later added.

How about just not having this discussion then?

Arce has joined a coalition of civil rights groups and lawmakers asking President Obama to issue an executive order emphasizing the need for the Department of Interior and the U.S. Department of Agriculture to adopt guiding priorities for a more inclusive approach to National Parks.

Get that, “a more inclusive approach to National Parks.” And you thought it was all about visiting natural wonders and historical sites? How quaint.

“Assess the cultural implications of existing agency uniforms, offices, signage, and other facilities. For example, the Park Service law-enforcement vehicles look like those used by U.S. Citizenship and Immigration Services, and uniforms have law enforcement connotations, both of which present a significant impediment to engaging all Americans.”

“Review names of sites throughout system for cultural bias. Some may require comprehensive name changes to reflect a broader and more inclusive history.”

The National Park Service is celebrating its centennial this year, and its mission, according to its website, is

…[to preserve] unimpaired the natural and cultural resources and values of the National Park System for the enjoyment, education, and inspiration of this and future generations.

That’s a big enough mission without bringing multiculturalism and “inclusiveness” into it.