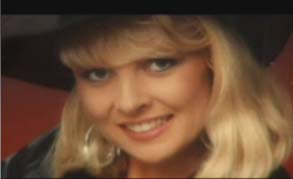 When the young mother of two children Janelle Hail (shown) was killed by a drunk-driving illegal alien, somehow the killer escaped to his home country of Colombia before the police could grab him. Since then, Roman Saldarriaga has been living openly, acting like a cool dude on Facebook, apparently unafraid of arrest and extradition.

"Six years ago, Janelle Hail's life came to an end. Her mother remembers the knock at the door.

"I'll never forget the feeling. It felt like someone blew a cannon right through my stomach," remembered Jacki Joseph, Janelle's mother.

Troopers say Roman Saldarriaga, an illegal immigrant, killed Hail while driving drunk, and took off before they could arrest him.

Saldarriaga is one of America's most wanted, yet we found him smiling on Facebook.

"He's just so flagrantly out there," said Joseph.

NBC2 took his Facebook page to Florida Highway Patrol -Â and we learned for the first time the agency knows where Roman Saldarriaga is.

"We've got a very good general area of where he's living," Lt. Chris Miller told us. "We know who he's associated with. We've got lots of information on him."

Lt. Miller told us Saldarriaga is in his home country of Colombia, and even though they want to arrest him, they can't.

"The problem we've got is Colombia will not extradite on this particular case. If it was drug related, we wouldn't have any issues getting him back to this country," said Lt. Miller."
[Illegal immigrant flees before arrest, NBC-2, Southwest Florida, November 20, 2009]

If that last item about extradition is accurate, then it is ridiculous, since the United States has given Colombia a ton of money in recent years: Former Colombian president blasts U.S. anti-drug strategy [CNN, October 14, 2009].

"Colombia remains the principal source of cocaine for the world, despite $6 billion in U.S. aid for anti-drug campaigns over the past decade."

Plus Colombia received $541 million in foreign aid from the US in 2008, so the authorities there could be more helpful in bringing a killer to justice.