In Washington, it’s business as usual in some precincts, where many of the top Democrats haven’t heard (or don’t care) that the country is broke. 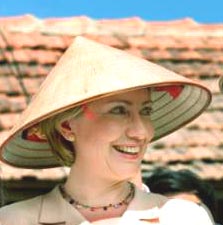 Secretary of State Hillary Clinton objects to reductions in her cushy budget that allows her to be Ms. Generous around the world on the nation’s depleted credit card. In fact, the State Department has been shoveling money at corrupt countries where much of the aid has been stolen or wasted on ridiculous projects.

Too much of foreign policy consists of thinly disguised bribery to shape behavior overseas. Maybe it works to a degree, but the country can no longer afford it.

How wasteful and objectionable are State Department programs? Very. One example that got a lot of attention last year was the use of tax money to build mosques overseas, as part of a cultural preservation program, or something. According to FactCheck.org, “The State Department says that, in total, the fund has contributed nearly $26 million to approximately 640 cultural heritage sites in more than 100 countries, and more than half was given before Obama took office.”

Another example of crazy diverse waste is Clinton’s scheme to empower Afghan women by giving them cell phones:

[. . .] The connection Maryam sees between women and wireless is apparent to the world’s biggest telecommunications companies, which have begun a push to bring female customers in the developing world to the same level as men. The U.S. and Australian agencies for international development are backing the effort by Vodafone Group Plc, France Telecom SA and others with $1 million to fund research into how to find and keep women like Maryam, and to persuade men that handsets aren’t a threat. [. . .]

The U.S. is helping fund MWomen to bring women’s handset use on par with men’s and change “the all-too-common belief that cell phones afford more freedom to women than they deserve,” Secretary of State Hillary Clinton said at an Oct. 7 press conference.

Sen Tom Coburn didn’t get much press coverage for his own detailed analysis of wasteful spending (and how to save $7 trillion), which was regrettable. But it is all online for inquiring minds to see: Back in Black: A Deficit Reduction Plan. Following is Coburn’s July 18 press conference about the analysis on C-SPAN:

The State Department section of Coburn’s report is linked here.

When the American people are asked what government spending should be cut in order to balance the federal budget, foreign aid programs generally top the list. In fact, the annual State and Foreign Operations appropriations have increased over 80 percent from 2002 to 2010, adjusting for inflation. President Obama?s budget request for Fiscal Year 2012 is a record-high $59 billion for State and Foreign Operations appropriations.

Back to the Secretary of State’s complaints about her budget being trimmed a little:

Secretary of State Hillary Clinton is urging a group of House Republicans to give up their push for a bill that would slash payments to the United Nations and limit aid to Egypt, Pakistan and the Palestinian Authority, among other groups.

Clinton said in a letter Tuesday that she would urge President Barack Obama to veto the bill if it passes in both houses of Congress because the measure “would be debilitating to my efforts to carry out a considered foreign policy and diplomacy, and to use foreign assistance strategically to that end,” The Washington Post reported.

The bill cleared the House Foreign Affairs Committee last week in an effort to cut $6.4 billion from the president’s request for $51 billion in foreign aid for 2012. While it has the potential to pass the GOP-controlled House, it’s seen as unable to get through the Democrat-led Senate.

The bill would impose “onerous restrictions” on State Department operations and foreign aid, Clinton wrote, and the “severe curtailing” of dues payments to international groups including the UN and the Organization of American States would be damaging.

The legislation’s proposal to block funding to countries that don’t meet corruption standards “has the potential to affect a staggering number of needy aid recipients,” as do proposals to restrict aid to Egypt, Lebanon, Yemen and the Palestinian Authority. The bill would only allow the flow of money to those countries if the Obama administration was able to certify that no members of terror groups or their sympathizers were serving in their governments.

Brad Goehner, a spokesman for Rep. Ileana Ros-Lehtinen (R-Fla.), the chairwoman of the House committee, told the Post that the letter was “disappointing, particularly given the current debt crisis, that the Obama administration is fighting to keep sending taxpayer money to foreign organizations and governments that undermine U.S. interests.”