It was already too late, Clint.

Dirty Harry was made in 1971 and immediately faced denunciations of "fascism" from respectable corners of the literary/artistic world.

By 1974, another vigilante would be released on celluloid (purportedly one of President Trump favorite films), which we will learn shortly faced a politically correct rewrite for it to be made.

Clint Eastwood: Political correctness would stop Dirty Harry being made today, Yahoo.com, May 22, 2017:

Clint Eastwood thinks that his classic cop thriller ‘Dirty Harry’ couldn’t be made today, thanks to political correctness. Speaking during an on-stage interview at the Cannes Film Festival, the 86-year-old actor and director said: “A lot of people thought it was politically incorrect.

“That was at the beginning of the era that we’re in now, where everybody thinks everyone’s politically correct. We’re killing ourselves by doing that.

“We’ve lost our sense of humour.”

Following Donald Trump’s inflammatory, racially-charged remarks in the lead-up to the US presidential election last year, Clint said we needed to ‘f**king get over it’.

“We’re really in a pussy generation. Everybody’s walking on eggshells,” he said in an interview with Esquire.

“We see people accusing people of being racist and all kinds of stuff.

“When I grew up, those things weren’t called racist. Secretly everybody’s getting tired of political correctness, kissing up.

“[When I did] Gran Torino, even my associate said, ‘This is a really good script, but it’s politically incorrect’. And I said, ‘Good. Let me read it tonight’. The next morning, I came in and I threw it on his desk and I said, ‘We’re starting this immediately’.”

In the incredible book Bronson's Loose!: The Making of the Death Wish Films, we learn just how deep the infection of political correctness was in the early 1970s, just after Dirty Harry had been released:

In Garfield's novel [Death Wish], the pivotal attack on the wife and daughter is not described, and there is no rape. Mayes's screenplay also had the assault taking place off-screen. But Winner shot a repulsive and vicious scene that showed both women being beaten and humiliated and the daughter being sexually assaulted. The director explains, "I thought that the audience had to be geared up to so hate the people that did this, that they wanted that type of person killed. I think you had to show [the attack] in order to get the audience sympathetic to Bronson going out and killing people." 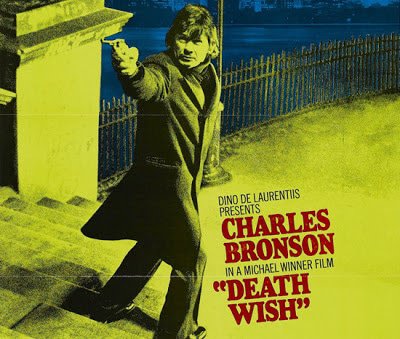 The sequence is one of the most brutal ever shown in a mainstream film and was made even more shocking by the presence of the classy Lange as one of the victims. (One effective camera angle represents the wife's point of view as she sees her daughter being violated.)

In Death Wish, Winner topped his disturbing scene in Chato's Land, where the Bronson character's wife is gang-raped and degraded.

Adding to the queasiness of the scene are the performances of the three scary-looking actors who played the attackers.[VDARE.com note: In the novel, they were black and Puerto Rican, in the movie they are played by an Irish-American, a a Greek-American, and, in his first-ever appearance on film—Jeff Goldblum.] 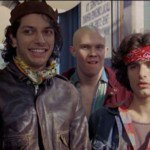 "You're looking for a villain to be as horrible as possible so the audience really hates him, and then they don't mind of he or his mates are killed," Winner explains. The screenplay specifically called for several of the mugger characters to be black, but Paramount executive Frank Yablans, concerned that the film would be racist, urged the director to limit the number of African Americans that were cast as thugs. (p. 12 -13)

The rot runs deep. It was already terminal in 1974. Forty three years later, it's merely festering on carrion.