>Wednesday’s Wall Street Journal front page featured a US map showing demographic change with the headline below reading “Rapid Change Aids Trump.” It seems that many citizens don’t like the cultural attack against American values that mass immigration and open borders cause. 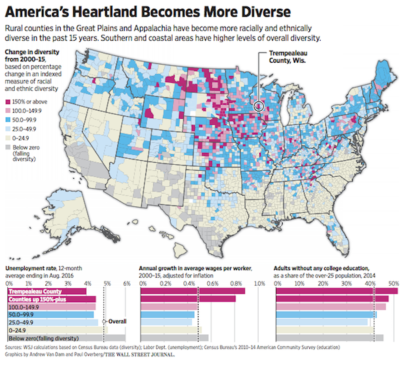 Who ever voted to have a non-American nation? When given a chance to express their opinions in elections, Americans have chosen sovereignty and the English language. Other than ethnic restaurants, the government-mandated importation of various cultures from around the world has brought nothing but trouble for the citizens. As today’s WSJ article points out, schools are hard hit.

When immigrants relocate to a new country, they normally settle in ethnic neighborhoods where they can live among persons who share their language, values and culture. But when Americans want the same thing, they are called racist by liberal elites.

Furthermore, the rapid automation of jobs ranging from manufacturing to finance means that immigration is no longer needed for cheap labor — if it ever was. The government should be cutting the import of foreigners, but instead, according to a new CIS study, immigration is surging and the total population of immigrants hit a record high in 2015 of 43.3 million.

Data show immigration has made small towns in the Midwest more racially diverse in the past 15 years, shifting the political needle

ARCADIA, Wis.—Small towns in the Midwest have diversified more quickly than almost any part of the U.S. since the start of an immigration wave at the beginning of this century. The resulting cultural changes appear to be moving the political needle.

A Wall Street Journal analysis of census data shows that counties in a distinct cluster of Midwestern states—Iowa, Indiana, Wisconsin, Illinois and Minnesota—saw among the fastest influxes of nonwhite residents of anywhere in the U.S. between 2000 and 2015. Hundreds of cities long dominated by white residents got a burst of Latino newcomers who migrated from Central America or uprooted from California and Texas.

That shift helps explain the emergence of Republican presidential nominee Donald Trump as a political force, and signals that tensions over immigration will likely outlive his candidacy. Among GOP voters in this year’s presidential primaries, counties that diversified rapidly were more likely to vote for the New York businessman, the Journal’s analysis shows.

Mr. Trump is emphasizing the Midwest this week, with a stop in Wisconsin scheduled for Tuesday.

In Arcadia, Wis., Don Leibl saw the dairy-farming hamlet transform from nearly all white to more than one-third Latino as Mexican immigrants streamed in for jobs. It is a main reason, he said, he is voting for Mr. Trump for president.

“If you’d seen the way things have changed in this town, you’d say, ‘Something needs to be done about it,’ ” the 51-year-old computer systems analyst said, referring to immigrants there illegally.

In this western Wisconsin enclave and other pockets of the rural Midwest, Mr. Trump’s pledge to build a wall along the Mexican border and prioritize jobs for American workers has struck a chord with some whites uneasy over rapidly changing demographics. They said they are worried illegal immigrants are crowding schools and unfairly tapping public assistance, problems they believe Mr. Trump would fix.

The Journal identified the epicenter of this shift using the diversity index, a tool often used by social scientists and economists. It measures the chance that any two people in a county will have a different race or ethnicity. In 244 counties, that diversity index at least doubled between 2000 and 2015, and more than half those counties were in the cluster of five Midwestern states. The analysis excludes tiny counties that produce numeric aberrations.

Traditional immigrant gateways like Los Angeles, Miami and Queens, N.Y., draw a far greater number of Latino and other minority residents, but because they have long been melting pots, their diversity has barely changed over the past 15 years.

In 88% of the rapidly diversifying counties, Latino population growth was the main driver. In about two-thirds of counties, newcomers helped expand the overall population. In the remaining third, the population fell despite an influx of new arrivals, which magnified the shift for locals as their peers died or moved away.

Mr. Trump won about 71% of sizable counties nationwide during the Republican presidential primaries. He took 73% of those where diversity at least doubled since 2000, and 80% of those where the diversity index rose at least 150%, the Journal’s analysis found.

“You’re talking about counties that are predominantly white, but they’re seeing a glimmer of change,” said William Frey, a demographer at the Brookings Institution. “It connects with the message of Trump.”

Diversity has risen in Carroll County, Iowa, where meatpacking jobs have drawn Latino immigrants, and Hendricks County, Ind., where minorities are moving for cheaper housing and logistics work at the Indianapolis airport. Mr. Trump won these counties in this year’s primaries, as he did in Arcadia’s Trempealeau County, in Wisconsin.

An influx of minority residents in a town over time favors Democrats because Latinos and blacks especially are more likely to vote Democratic. In many of these rapidly diversifying counties, the fact that many of the new Latino residents presumably aren’t eligible to vote significantly mutes their impact on the electorate.

Unemployment is actually lower in rapidly diversifying counties than in the country on the whole, a sign that concerns over lost jobs are weighing less on voters in these areas. In counties where diversity at least doubled, unemployment averages 4.5%, compared with 4.9% nationally.

Craig Williams, chairman of the Carroll County Republican Party, said it is the lawlessness of illegal immigration that bothers residents. “People talk about immigration as if we’re a bunch of racists,” he said. “Do we have laws, or do we not have laws? If we’re just going to ignore them, then what’s the point?”

Few U.S. locales have changed as rapidly in recent years as Arcadia, a onetime railroad town nestled in the hills and built by German, Polish and Norwegian immigrants. As recently as the late 1990s, its population of about 2,400 was almost entirely white and aging as young residents left and fewer people had children.

That all changed at the turn of this century. Dairy farmers who wanted their cows milked around the clock began calling contacts in Texas to connect them with Mexican workers. Ashley Furniture Industries Inc., now the country’s largest furniture maker, hired hundreds of Hispanic workers to build chairs, beds and entertainment consoles at its sprawling headquarters here. Chicken producer GNP Co. tapped the labor pool, too.

The area’s unusually strong job market made it a magnet for Mexican, Guatemalan, Honduran and Salvadoran workers. Between 2000 and 2014, Hispanics went from being 3% of the population to 35% in Arcadia, census figures show. Its population rose to around 3,000.

Holy Family Parish brought in Rev. Sebastian Kolodziejczyk, a bilingual priest, and added a Spanish Mass because “everybody wants to pray in their own language,” he said. Landlords watched as some Hispanic tenants took in cousins and uncles arriving for their first jobs. A Latino bakery and other shops popped up along Main Street.

“We were hit like a tsunami,” said Arcadia Elementary School Principal Paul Halverson, whose school went from almost all white at the turn of the century to 73% Hispanic as of this year.

The share of students in the school district qualifying for free and reduced-price lunch rose to 65% this year from 20% in the late 1990s. Administrators expanded the summer-school program to bolster students’ English and math, and pared homework assignments because Latino parents working long hours struggled to help their children complete it, Superintendent Louie Ferguson said. This year the district opened a new middle school to handle the enrollment surge.

There is no official measure of how many immigrants in the town are there illegally, and interviews with more than two dozen local officials, employers, longtime residents and immigrants suggest the numbers today are off their peak. Social services workers and others in the town said they saw many people come there without legal status and use false identification to get jobs when the migration wave began. But employers have become stricter in recent years about verifying workers, and some of those initially here without documentation have since gained legal status.

The food pantry had to scrap a queue it created for Spanish speakers after some locals complained immigrants were getting their food before them. Some newcomers opened their garages and played music, and gathered for big picnics at parks. “Families from Arcadia would call and say, ‘I can’t stand it. They’re so noisy,’ ” said Cynthia Jacoby, a former family-living educator who runs a church-sponsored thrift shop.

In 2006, then-mayor John Kimmel proposed making English the official language for directional signage, requiring an American flag to accompany any foreign flag and capping housing occupancy for rental properties. The idea caused such an uproar among some locals and newcomers that he eventually shelved all but the last proposal.

“As you live by each other and your kids become friends, a lot of that goes by the wayside,” he said recently, while eating fish sticks at the bowling alley. He said he plans to vote for Mr. Trump but that his decision “has nothing to do with his immigration stance.”

Longtime residents said most people were happy to have a growing population and embraced the newcomers, who were necessary to absorb the abundance of jobs. Ashley Furniture built soccer fields and basketball courts. Rev. Kolodziejczyk invited a mariachi band to a fall heritage festival that traditionally showcased Polish and German food. Local officials translated signs and pamphlets into Spanish.

“This is a place where if tomorrow every worker of Latino descent up and left, we’d be in a heap load of trouble,” said Patricia Malone, a community development educator.

Yesenia Gama Cortez, a 32-year-old Mexican native, said she feels at home selling empanadas, cold Modelo beer and other groceries in the shop she opened along Main Street. “The Arcadia people are very welcoming,” she said from behind the counter.

Trempealeau County has voted Democratic in presidential elections since 1988, and Democratic presidential nominee Hillary Clinton is favored to win the state of Wisconsin. Among GOP voters in the county, Mr. Trump took half the votes to win this year’s crowded primary, even though Texas Sen. Ted Cruz won the state.

Republican voters said they are deeply distrustful of Mrs. Clinton in part because they believe she sold government access through her family foundation and has profited too much off her political career. In addition to his immigration plans, they like Mr. Trump’s outsider status and support for gun owners.

Mark VanAcker, a 66-year-old farm animal veterinarian, said he is worried that illegal immigrants are straining school finances and increasing crime here. He no longer leaves his truck unlocked with the keys in it.

“There is a high suspicion that people coming into our country without citizenship status are entitled to things that we have to work for,” he said. “When a politician says that needs to be addressed, we listen.”

Carmen Lisowski, a 47-year-old Mexican-born resident, is turned off by how Mr. Trump’s harsh talk about immigrants “cuts everybody with the same scissors.” She came to this town from Northern California so she could earn money making chairs at Ashley Furniture to support her two daughters. Now she works at the preschool, volunteers at the church, cleans houses and helps friends with translation. “I come here for work, not to steal stuff,” Ms. Lisowski said. She married a local man almost nine years ago.