From the Claremont Review of Books:

THE HIDDEN COSTS OF IMMIGRATION 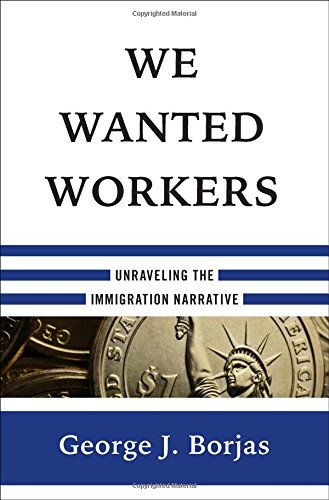 he benefits of immigration are obvious to anyone who has ever eaten sushi, left a rumpled hotel room and found it spotless on returning a few minutes later, or golfed on three or four different well-groomed courses in the same small city. The costs of immigration, by contrast, are discussed only within a Losers’ Corner of poisonous internet comment threads and drive-time radio shows. What is more, the payoffs—that sushi, those golf courses—came immediately. The liabilities were mostly “off-balance-sheet,” and have yet to be settled. The welfare state’s responsibility for the swelling ranks of the aging poor is barely nodded at in the budget. The adaptation of the U.S. Constitution to fit immigration, rather than vice versa, is a huge cost, too. The adaptations required by mass immigration are so large that it can be judged a success only if the compensating economic benefits are vast. The best recent economic research indicates that they are not. …

[Harvard economist George] Borjas’s skepticism about the standard immigration narrative is the more damning because, on almost all social science matters, he seems not to have a contrarian bone in his body. Economists, like all knowledge specialists, are often prisoners of the research agenda taken up by their most gifted contemporaries. Borjas has no bone to pick with that agenda, which is often obsessively focused on uncovering bigotry and prejudice. Thus he quotes a study by economist Stephen Trejo to the effect that relative youth, bad English, and miseducation explain three quarters of the wage gap between Mexicans and U.S. whites but only a third of the black-white gap—“leading,” Borjas writes, “to the conclusion that much of that gap reflects the pernicious effects of racial discrimination.” Leading how? Not via any evidence Borjas cites. “In the long run,” he writes elsewhere, “immigration may be fiscally beneficial because the unfunded liabilities in Social Security and Medicare are unsustainable and will require either a substantial increase in taxes or a substantial cut in benefits.” But those requirements do not make it wise or even advisable to add more unfunded liabilities in the form of immigrant retirement costs.

Borjas’s criticism of the standard immigration narrative thus carries no political agenda at all. It is confined to the ways that that narrative fails to hold up on its own terms. If he has arrived at conclusions more pessimistic than those of his colleagues, he has done so not by challenging their ideology but by correcting their errors. Several are laid out in We Wanted Workers. Let us examine three:

If one looks at data from the Census Bureau’s Survey of Income and Program Participation, one finds that 46% of households headed by an immigrant resort to welfare in some form, versus 27% of households headed by an American. Supporters of mass immigration, however, from community organizers to the Wall Street Journal, prefer to use a different and more easily manipulable data set from the Census Bureau’s Current Population Survey, and to arrange it by individuals rather than households. This sounds more…individualistic. It also gives the impression that rates of welfare dependency among newcomers and natives are more roughly comparable. But it is a trick, Borjas shows. If an undocumented single mother from Mexico, say, bears two children after arriving in the U.S. and winds up on welfare, the system shows an increase of one immigrant and two natives. The welfare system is propped up by native households, each of which pays, by Borjas’s estimate, about $470 per year to cover losses from immigration.

2. Competition from immigrants dramatically reduces the wages of the workers whose qualifications most resemble theirs.

This is the sort of common-sense conclusion that you need not ever spend a day in economics class to understand. Yet for three decades economists have clung doggedly to the doctrine that immigrants can offer efficiencies to an economy without lowering the wage in the industries where they work. This is nonsense on the conceptual level: the lowered wages are the efficiencies. …

Whether immigrants help or hurt a sector of the economy has to do with whether they enter it as “complements” or competitors. Today’s immigrants are complements for rich people, who tend not to act as their own valets, chefs, gardeners, or maids. Others do those jobs. If the cost of them gets cheaper, rich people’s lives get better, and the number of people who can live like rich people may increase. The lives of the natives who used to perform those tasks get worse. The rule of thumb is that a 10% increase in the workforce of a given sector will result in a 3% fall in wages.

3. The primary effect of immigrants on the country receiving them is a massive regressive redistribution of income and wealth among natives.

This redistributive effect is, for Borjas, “the key insight I have gleaned from decades of research on the economics of immigration.” The main thing about immigration is not wealth creation. It is not entrepreneurship. It is not diversity. It is redistribution from the poor to the rich. That this should be so jarring and implausible-sounding to contemporary sensibilities shows how censored the discussion of immigration economics has been—for this has always been one of the basic consensus conclusions of most economic models of migration. …