An MSNBC talking head, Richard Lui, has outed himself as a grandson of illegal aliens of the Paper Son variety, an odd category that occurred through an accident of history.

As it happened, the 1906 San Francisco earthquake and fire destroyed the city’s hall of records (shown below), including birth and immigration records. Conveniently, the disaster allowed Chinese to claim they were born here or were related to citizens (so-called Paper Sons), and there was no way to prove them liars. Later research revealed that every Chinese woman in the city would had to have given birth to 800 sons to account for the number of claimants. 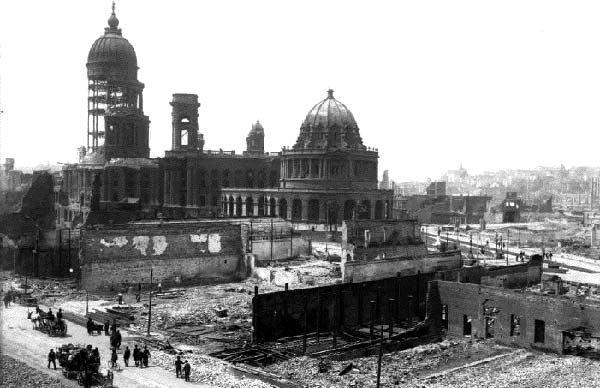 Being descended from a Paper Son used to be less mentioned, but these days when anything goes, there’s no shame in grandad being a fraudster. Besides, the rationalization is given that the US is a mean racist country because of the Chinese Exclusion Act, so it’s fine for Asians to screw America.

The main point of Richard Lui’s little essay here, however, is to normalize lawbreaking in immigration: he is saying that millions came to America however they could, even illegally, so what’s the big deal? Latter day unlawful arrivers are just as good as the descendants of founders.

Plenty of Asians are illegal aliens or descendants of lawbreakers, Lui declared. To say that about a model minority is to raise up hispanics by denigrating his own people, not to mention the rule of law. He probably won’t be criticized by his tribe though, since the effort is a political statement in the service of expanding diverse immigration and the task of de-whitening America.

The many faces of immigration reform, San Francisco Chronicle, by Richard Lui, February 10, 2013

I am the grandson of illegal immigrants. My father’s parents came here as Paper Son and Paper Daughter. The “Paper” system involved buying real U.S. identities, sold by international agents, and then assumed, in this case, by my grandparents when they arrived in California. My real last name is Wong, not the name they bought - Lui.

They were “illegals,” and they weren’t Latinos.

Lui Lee (grandpa) and Quock Yuen Jow (grandma) took their illegal immigration secret to their grave. Their tombstone was the only place with their real name. They were scared their children would face the threat modern-day Dream-ers did – being sent back because of their illegal immigrant path.

Judy Yung, co-author of “Angel Island – Immigrant Gateway to America,” says my background is not uncommon. She estimates 1 million Chinese Americans either came here illegally or are descendants of illegal immigrants. The Pew Research Center more broadly estimates up to 15 percent of Asian American immigrants could be illegal. Of those 1.3 million illegal Asian immigrants, more than 100,000 are Dream-ers, says the Asian American Justice Center.

The point – despite immigration reform often being framed as a Latino issue, it’s also an Asian issue. And most importantly, it’s a uniting, American issue. For instance, the data shows Latino and Asian American communities share a surprising simpatico.

The controversial immigration laws around Latinos are well known and have been debated on Capitol Hill. They are as new as they are old. Asian Americans are their doppelganger.

The World War II internment seared disillusionment into the minds of generations of Japanese Americans about what it meant to be American. And the only law ever to ban a single country from immigration, the Exclusion Act of 1882, did the same for Chinese Americans. (Congress issued a formal apology last year.)

Today a majority of Latino and Asian American adults are foreign-born: 53 and 74 percent respectively; English as a second language – even more alike – 76 percent and 80 percent in this election, says the Census Bureau and Northwestern University Research.

In addition, the two groups’ collective psyches share a common struggle: to feel equal, to feel a sense of having arrived. Generalizations remind them: “Illegal immigrants are Latinos,” a common false equivalence; and “Asian Americans are foreign,” despite a 230-year history of Asians in the United States.

Irish Americans have also had waves of illegal or unauthorized immigration going back to the 1800s. Today, the Irish American community has as many as 50,000 unauthorized immigrants. In 2006, Sen. Ted Kennedy, who regularly met with illegal Irish immigrant groups, said on a Senate panel that existing immigration law he helped pass needed to change. He said it “worked in a very dramatic and significant way against the Irish.”

As generations have passed, these groups have assimilated. Regardless of generation, immigration is a defining experience for these groups.

But let’s consider for a second immigration not as winning or losing, but as pioneering. Does the United States have the brains to propel it forward? Is immigration reform about new groups, or all roots? What does immigration law say about us?

It says everything. Illegally or legally, we have grown our country like no other. And in the process we have become the globe’s largest and most powerful economy. We must remember how we all got here – not one group, but all groups. If we forget, we will be forgetting how America is unlike any other nation in the world.

Richard Lui, a UC Berkeley graduate, is a news anchor on MSNBC-TV.