The Los Angeles Times had an interesting front page graphic on Wednesday, showing that Beijing’s air pollution is many times that of the famously smoggy City of the Angels. 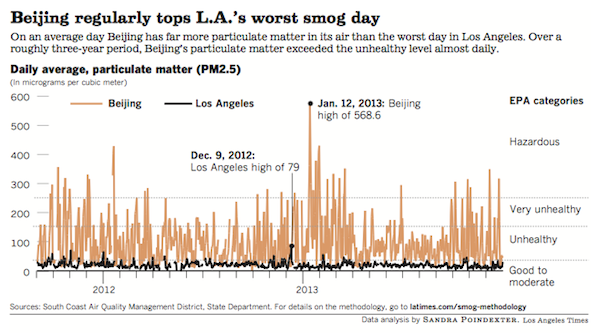 The chart goes with a news article the struggle of Chinese people to convince their government to tackle cleaning up their nation’s air, a hugely expensive project, as we know from our own environmental regulations. We shall see whether reform happens, given the stubbornness of the ChiCom leadership and the dependence of industry on old-fashioned coal-fueled energy.

The smog in big cities is unimaginable, and is obviously a hazard to human health. One report warned that in some areas, air pollution is now impeding photosynthesis and creating possible damage to country’s food supply. Water and farmland are polluted also, but the thick grey air is unavoidable. 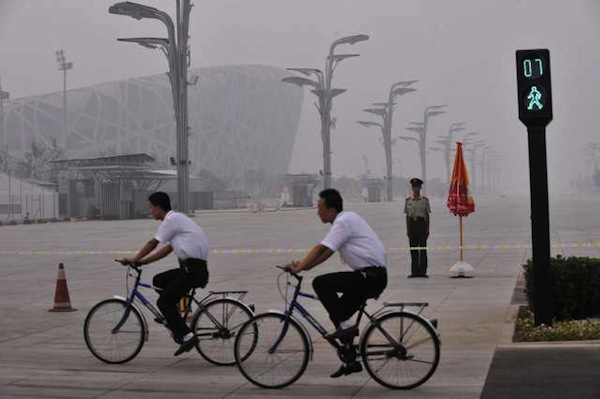 A potential clean-up of Chinese air filth should be welcomed by environmentalists, if the greenies could unhinge briefly from their globalist perspective and celebrate an instance of national responsibility.

Unfortunately, what happens in China doesn’t stay in China. Airborne crud floats across the jet stream directly to the west coast of the United States.

BEIJING (Reuters) – Pollution from China travels in large quantities across the Pacific Ocean to the United States, a new study has found, making environmental and health problems unexpected side effects of U.S. demand for cheap China-manufactured goods.

On some days, acid rain-inducing sulfate from burning of fossil fuels in China can account for as much as a quarter of sulfate pollution in the western United States, a team of Chinese and American researchers said in the report published by the U.S. National Academy of Sciences, a non-profit society of scholars.

So the “cheap” manufactured products from Red China come with a hidden cost to Amerians’ health and environmental safety.

China’s prolific pollution production makes another argument for returning outsourced industry to the United States, where manufacturing will be kinder to the planet.

And why is planet-fouling Red China a member of the World Trade Association where it is given a level playing field with environmentally responsible nations? China deserves a big pollution tariff, which would be good for all concerned, particularly the ChiCom leaders who need a strong reality check to get their act together.

Here’s the LA Times article, which doesn’t mention the effects of Chinese pollution on others, but focuses on the efforts of Chinese citizens to knock some sense into politicians, which is very laudable in an authoritarian state.

Last fall, 29-year-old Fang Da, an entrepreneur and cycling enthusiast, suddenly found himself in the midst of a coughing fit after biking near his home in Hangzhou, in eastern China.

So he went to the Internet and started learning just how serious the air pollution problem was. Fang’s curiosity quickly turned into an obsession. He created an environmental awareness group called the Survival Guide to Haze on the Chinese social media site WeChat; more than 50,000 people now subscribe. He engaged in a high-profile battle with a Chinese smog mask manufacturer, calling out the company’s products as useless.

“We need citizens to get involved with the environment,” said Fang. “People … think it’s just the government’s responsibility to clean up the air. But to be honest, it’s the government that made it this way.”

The growing anger from citizens such as Fang has garnered the government’s attention.

In March, Premier Li Keqiang said China would “declare war” on pollution, acknowledging growing public anger over unchecked industrialization that has defiled the country’s skies, water and soil. The government has outlined plans to spend $275 billion on efforts to reduce air pollution between 2013 and 2017.

But as the effort gets underway, a key question facing Communist Party leaders is whether imposing strict anti-pollution measures from the top down will be enough. Cities and nations that have made the greatest progress in tackling environmental crises have been open, pluralistic systems responsive to citizen demands for change.

The countries that have been successful “have all been democratic, constitution-based societies,” said Donald Worster, an environmental historian at the University of Kansas who is now helping establish an ecological history center at People’s University in Beijing.

Environmental advocates are closely watching to see whether China can become the first authoritarian country to make significant progress on a cleanup, or whether environmental degradation might become a formidable driver of political change.

China’s leaders, said Worster, seem to be demonstrating a sincere intention of making progress, knowing that they must respond to the increasing public frustration to maintain their legitimacy.

“The Chinese are caught … between their political institutions and the rising demands and concerns of a rising middle class,” Worster said. One of the factors in the collapse of the Soviet Union, he added, was growing dissatisfaction among satellite states in Eastern Europe with widespread environmental pollution.

The problems are vast: All 74 cities surveyed by the government last year exceeded World Health Organization air standards. A report released by the Ministry of Environmental Protection this spring said 19.4% of China’s arable land is contaminated. And a 2013 study by the Ministry of Land and Resources found that nearly 60% of China had “very poor” or “relatively poor” groundwater quality.

Such problems have elsewhere led to growing public activism similar to Fang’s.

In the case of California’s battle against smog in the 20th century, a noisy citizens movement that began with groups such as Stamp Out Smog, feisty news media and a strong legal system were instrumental in encouraging governmental air pollution efforts — and in agitating when authorities’ actions fell short.

Shifts in China’s system are starting to materialize. The nation this year overhauled its basic Environmental Protection Law, adopting changes that Wang Yan of the Natural Resources Defense Council’s China program said will probably “emerge as a historic moment for environmental protection in China.”

The revisions, which take effect in 2015, will give a limited number of “approved” nongovernmental organizations — about 300 — the right to sue polluters in court (though international groups such as Greenpeace would not be eligible). New provisions also call for daily fines for polluters who break the law, and the possible detention of company managers for offenses, including falsifying emissions data, discharging pollutants without a permit or refusing to stop construction on a facility when ordered because of a lack of environmental reviews.

China has set up more than 130 local environmental courts; this summer, the Supreme Court established an Environmental and Resources Tribunal and has appointed a senior judge to handle cases in an effort to improve law enforcement and guide lower courts.

Ran Ran, an assistant professor of political science at People’s University, said the special courts are “definitely a big step forward…. But whether it will actually change conditions in China is unclear — enforcement is key.”

Ran said bureaucrats still are rewarded primarily for economic development and “social stability,” which can mean silencing anyone who dares to mount an environmental protest.

Such demonstrations frequently erupt in China, but authorities usually disperse them quickly. Fang, the activist, noted that residents near his offices in Hangzhou this year took to the streets in opposition to a trash-burning facility approved by the government.

China does not yet regard environmental groups as partners who deserve a seat at the decision-making table, said Angel Hsu, director of the Environmental Performance Index, a joint project of the Yale Center for Environmental Law and Policy and the Center for International Earth Science Information Network at Columbia University.

“They still don’t come to NGOs and say we want your help or input, we want to brief you on policy,” she said. “Plus, every NGO has to have a government sponsor, so until you really have a system of independent channels, it’s not clear how much can change.”

Information is crucial for dialogue, and China has long been hesitant to release any environmental data that might cause alarm. Still, there have been limited moves toward greater transparency.

For example, the government this year started to require about 15,000 of the country’s largest factories to publicly report emissions and wastewater discharges. And an official report in the spring on soil contamination, a subject previously deemed a state secret, was hailed by many observers.

Recently, even state-run news outlets have begun to ask sharper questions about how the government is implementing environmental regulations.

In February, when a blanket of smog covered Beijing for nearly a week, the business channel of state-run China Central Television asked why the city government failed to initiate a more intensive emergency response. Local leaders raised the pollution alert level to yellow instead of orange or red, the most serious designation, which would have mandated closing schools, restricting driving, and suspending operations at industrial plants.

“Beijing municipal government, don’t pretend to be blind in the fog,” the channel said via the Twitter-like service Weibo. “The government should not shun its responsibility or turn a blind eye to the smog.”

Eugene Leong, an air pollution expert and former executive director of the Assn. of Bay Area Governments who has been a visiting professor at Peking University, believes China has much to learn from California’s experience.

But so far, he says, he’s underwhelmed by Beijing’s actions.

“They pay lip service by saying they’re going to attack this and attack that,” said Leong. But Chinese regulators, he said, have only a “rudimentary” understanding of the individual sources of the nation’s pollution. They have not taken relatively simple steps like oxygenating gasoline to reduce emissions.

“They don’t want to spend the money to clean up the coal, the diesel, the gasoline,” he said.

Leong also takes issue with China’s campaign to go after small sources of pollution, such as outdoor barbecue stands in Beijing, before getting a handle on larger emitters.

“You lose public credibility when you start going after the little guy and they see big sources uncontrolled,” he said.

Chip Jacobs, coauthor of the Southern California pollution history “Smogtown,” who has a book coming soon on China’s environmental woes, said the nation is in only the beginning stages of truly tackling smog. “The court system is lacking, people don’t really have a right to assemble and organize freely, and the 1st Amendment doesn’t really exist there,” he said.

But Jacobs sees flickers of hope.

“In L.A., really after about five or 10 years of smog, citizens got riled up,” he said, “and I think that’s kind of what’s going on in China now too.”