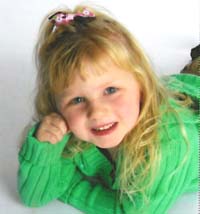 The illegal alien whose reckless driving caused the death of four-year-old Josie Bluhm (pictured) was sentenced on Friday. The good news is that Eleazar Rangel-Ochoa got the maximum prison term; unfortunately that's only six years.

He crashed into the Bluhm vehicle after he ran a red light, driving with no license on the way to the job he held unlawfully. He had been previously arrested three times for drunk driving but was not deported. So a child died because of a preventable crime at the hands of an illegal alien who should never have been in this country.

A solemn Douglas County District Judge J Russell Derr sentenced Rangel-Ochoa to 32 months to six years years in prison — the maximum sentence for misdemeanor motor-vehicle homicide and for felony driving while he was suspended.

Rangel-Ochoa, 27, ran a red light about 7:30 a.m. May 12 — crashing a truck into a van driven by Jayme Bluhm and carrying the Bluhms' three children.

Josie's father, Kyle, and mother, Jayme, tearfully talked about their bubbly daughter. With her blonde-hair and a button nose, their middle child had an infectious personality.

Jayme Bluhm had been headed to day care to drop off her children, then ages 5, 4 and 1. The collision ejected Josie, 4, and caused her death.

Rangel-Ochoa, an illegal immigrant, had lost his license for 15 years after his third drunken-driving conviction in 2003.

He wasn't drunk on May 12 — hence the misdemeanor motor-vehicle homicide charge.

The case sparked concern about why Rangel-Ochoa hadn't been deported after his 2003 conviction. His previous attorney has said that immigration officials now are more stringent and that Rangel-Ochoa wouldn't be treated with such leniency today. He likely will face deportation after he serves his sentence.

That word "likely" is disturbing. Deportation should be set in stone for illegal alien felons when their prison time is up, so citizens don't have to depend upon the kindness of the legal system. 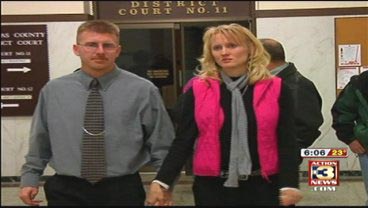 Josie's parents, Kyle and Jayme Bluhm (above), spoke about the heartache of losing their beloved little girl, like setting the table for four instead of five. Josie had thought she wanted to be a teacher like her dad, but all those plans for the future are gone now.