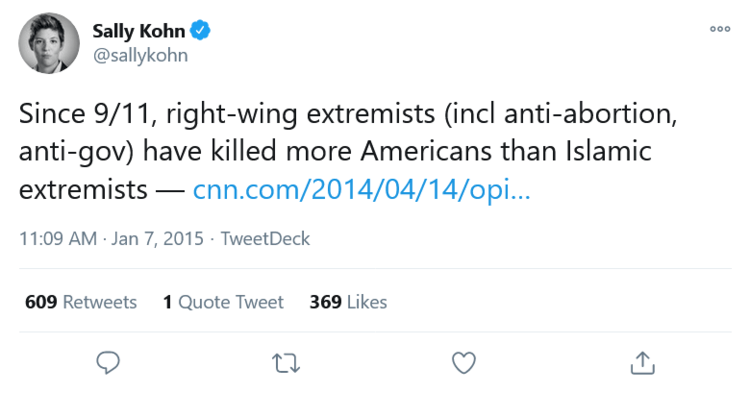 The Charlie Hebdo shootings in Paris, in which Muslims shot 12 people at a paper that published cartoons of Mohammed, inspired these Tweet from the Daily Beast's Sally Kohn, a "progressive":

Saying that all Muslims are not terrorists and that all of Islam is not evil is NOT remotely defending terrorism. I can’t even...

The CNN story is what some people call "nonsense on stilts." Their weird count is

In fact, since 9/11 extremists affiliated with a variety of far-right wing ideologies, including white supremacists, anti-abortion extremists and anti-government militants, have killed more people in the United States than have extremists motivated by al Qaeda's ideology. According to a count by the New America Foundation, right wing extremists have killed 34 people in the United States for political reasons since 9/11. (The total includes the latest shootings in Kansas, which are being classified as a hate crime).

This counts almost no Muslim killings as terrorists unless there's a definite connection to overseas terror. Here are all the killings inside the US  you're supposed to consider terrorist since 9/11:

Now, first of all, it omits some terror attacks (including three murders by the Tsarnaevs):

But immigrant Muslims are always killing people in America  for random reasons—take Somali immigrant Omar Mohamed Kalmio who, as Brenda Walker wrote  "got life in prison for a 2011 mass murder in two parts. First he shot his girlfriend, then drove across town to murder her 13-year-old brother, her mother and the mother’s boyfriend. "

Black Muslims are heavily included in the crime statistics—two Black Muslims and one immigrant Muslim are included in my survey of "Disgruntled Minority Massacres", (anti-white workplace shooters) although the point of that article was that they were motivated by anti-white hatred more than Islam.

Muslims have been in mass shootings—see the case of John Zawahri:If A Maniac With A Middle Eastern Name Shoots A Bunch Of Americans, Inquiring Minds Want To Know If He's A Muslim, Don't They? Well, Don't They?

Then there was Orange County carjacker Ali Syed, who killed three people and himself. That was a Muslim mass murder, wasn't it?

I wrote at the time of the Ali Syed murders that "Even if it's not Sudden Jihad, but ordinary homicidal gangsterism, I still think Ali Syed should have been doing it in some other country."

But the point is this—the Media isn't allowed to notice that a killing is done by a Muslim, but is encouraged to look for right-wing ties where none exist.