CHARLIE HEBDO On Wenjian And Ramos: "Two Police Officers Executed In Reprisals For The Assassination Of Two American Blacks"

This is a cartoon from the last issue of Charlie Hebdo before the attack (the one with Houellebecq on the cover) of which I acquired a scan. It's by "Tignous". (Bernard Verlhac—1957–7 January 2015.) 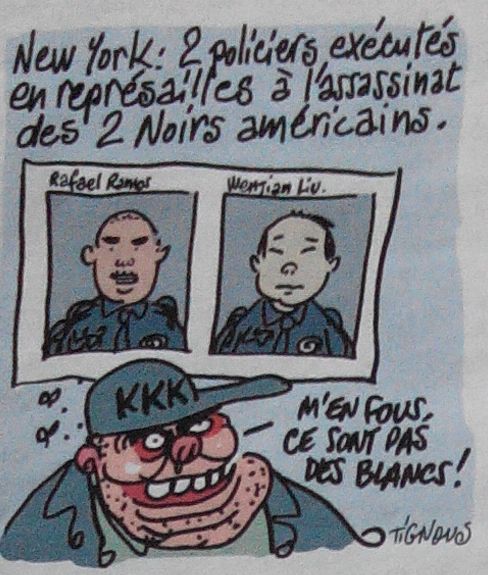 Here's what the cartoon says—my translation.

New York: Two police officers executed in reprisals for the assassination of two American blacks. KKK member: "I don't give a f*ck, they're not white."

May I say that this picture of America's race relations is a wrong-headed as the WSJ's picture of French anti-clericalism below?

Tignous seemed to feel that there are two American races, the white and non-white, and there exists a large segment of racist whites—who don't shave or wash—who would dismiss the murder of Wenjian and Ramos on that basis.

That's wrong. In fact, as John Derbyshire has been writing for years,

One thing I have learned, I think, in fifteen years in the U.S.A. is that there are actually only two races here: black, and nonblack.

Which is to say that there are lots of blacks who would consider a Hispanic or Asian police officer just as non-black as a white one, and  VDARE.com readers take the murder of Wenjian and Ramos quite as seriously as the murders of white police.

Of course, while Verlhac's view of the recent riots was the far Left one—the implications of the words "executed in reprisals for the assassination of two American blacks" are the same as the they would be in English—it wasn't entirely his fault: he had nothing to go on but the American Main Stream media.

Oh, well, de mortuis, I suppose. Verlhac was killed by Muslims who hated him for the same reasons they hate me—as Wenjian and Ramos were.

But it's typical that the man who did that cartoon above was part of an initiative  to "promote tolerance through illustration." 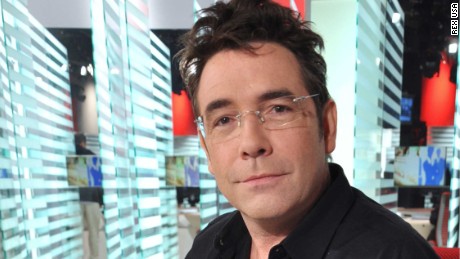 Ecuadorian cartoonist Xavier Bonilla, 50, said he got to know Verlhac during seminars with Cartooning for Peace, an international initiative created to promote tolerance through illustration.

"Tignous was great at humor and had an easy manner about himself," said Bonilla. "He strongly believed in freedom of the press, something that becomes evident when you see his cartoons. He was a man who enjoyed freedom to its fullest in his artistic creativity and published his cartoons without fear."

Verlhac, 58, was a contributor to the magazine, Sky News reported.

Bonilla recalled a reception he once attended with Verlhac at the French Embassy in Bogota, Colombia.

"He asked about 10 women to pose for him seated on a sofa," he said. "Tignous took his time making a drawing of all of them posing. When he finally showed them the drawing, they were not very pleased because it was a cartoon that didn't really make them look beautiful. He simply told them, 'I drew them just like you look and that's how I see you.' Then he laughed out loud. This was the kind of dark humor that was also evident in his cartoons. He was great at that. He was a great artist."