It's rare to see an article like this, because it actually mentions the victims (like 21-year-old Steven Rand Rouvet) of unlicensed drivers, who are often drunk illegal aliens.

COLUMBIA–Recent accidents, some involving illegal immigrants, have captured the attention of the community and have lawmakers talking about what to do about unlicensed drivers.

From 2001 to 2005, 807 fatal accidents in South Carolina are believed to have involved unlicensed drivers, according to AAA Carolinas. It's unclear how many of those accidents were caused by illegal immigrants.

Regardless of the reasons they don't have licenses, unlicensed drivers are among the greatest safety threats on the highways, said Carol Gifford, public relations manager for AAA Carolinas, which released the "Unlicensed to Kill" study [PDF] in March. [...]

One of the crime victims remembered was Joyce Dargan, killed near her home.

Joyce Dargan, 57, was hit and killed when she walked to her mailbox in Restaurant Row, The Myrtle Beach Sun News reported. Authorities said two teen boys were racing their cars when one swerved off the road and struck Dargan. The boys, 14 and 15 at the time, were sentenced to up to six years in juvenile prison. Both were illegal immigrants who later could be deported. The boy whose car struck Dargan had been stopped for traffic violations twice in the six weeks before her death.

I included her in a poster I created a couple years ago, partially because I thought it was outrageous that border anarchy has made going the the mailbox a dangerous activity. 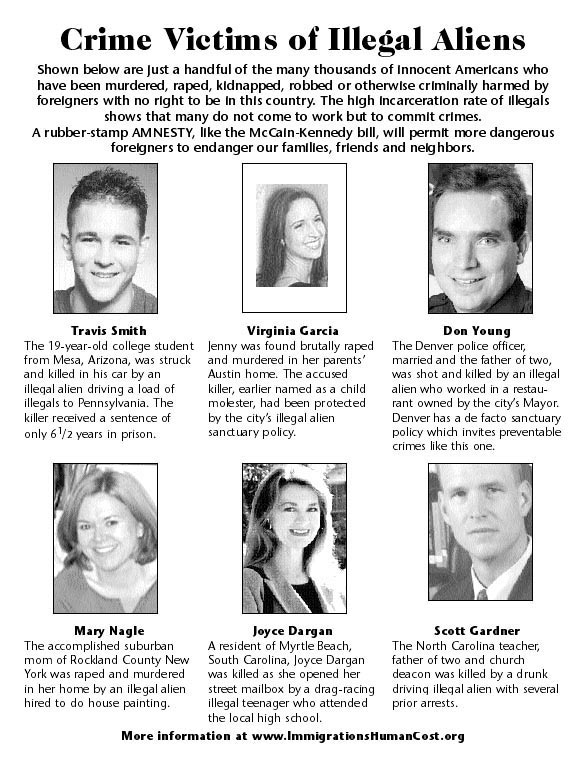