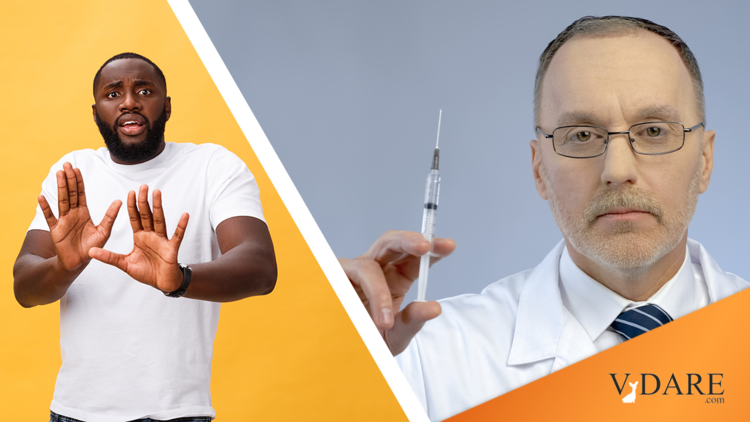 Charles Blow In The NYT: Blacks Tend To Be Anti-Vaxxers, White Men At Fault

Earlier, by Jared Taylor: The Truth About Tuskegee

From the New York Times opinion page, some more of the Current Year’s now traditional antiquarianism on race:

How Black People Learned Not to Trust
Concerns about vaccination are unfortunate, but they have historical roots.

It would appear that the people in American hit hardest by Covid-19 — Black people — are also the group most leery about the prospects of a vaccine.

That’s the conventional wisdom, but it appears that Hispanics have more than caught up with blacks. From the CDC:

My vague impression is that urban blacks (and some rural blacks in Georgia) got hit hard in last spring’s first wave, but most journalists haven’t updated their assumptions since then. The second wave in summer smashed sunbelt Latinos, and the current fall third wave that began in the Dakotas is hitting whites and Latinos hard.

… But that same report contained the following: “Black Americans continue to stand out as less inclined to get vaccinated than other racial and ethnic groups: 42 percent would do so, compared with 63 percent of Hispanic and 61 percent of white adults.”

The unfortunate American fact is that Black people in this country have been well-trained, over centuries, to distrust both the government and the medical establishment on the issue of health care.

Furthermore, as the Centers for Disease Control and Prevention explains: “In 1932, the Public Health Service, working with the Tuskegee Institute, began a study to record the natural history of syphilis in hopes of justifying treatment programs for blacks. It was called the ‘Tuskegee Study of Untreated Syphilis in the Negro Male.’ ”

Hundreds of Black men were told they were being treated for syphilis, but they were not. They were being observed to see how the disease would progress. The men suffered under this experiment for 40 years.

I hope that America can overcome Black people’s trepidations about this vaccine, but it is impossible to say that that trepidation doesn’t have historical merit.

Occam’s Razor, on the other hand, would suggest that anti-vaxx ideation is more common among people who aren’t really as smart as they think they are: blacks, with their combination of higher average self-esteem and lower average IQ, are well represented in those ranks.

The longer the pandemic drags on due to the lack of courage of anti-vaxxers, the more time for elites to carry out the various bad ideas they are entertaining under the justification of The Great Reset.