The Chamber of Commerce is turning the screws on the House, with a high-pressure letter for House party leaders Boehner and Pelosi. Signers include everyone from Facebook to the American Beekeeping Federation. It’s the usual lies er, talking points about the economy, mostly with the threat that business wants millions of new cheap workers, or else. Resistance is futile, etc. The twenty million Americans unable to find full-time work don’t concern the business titans.

However, the image on the Chamber’s home page introducing the letter (shown below) is most curious and deserves consideration. 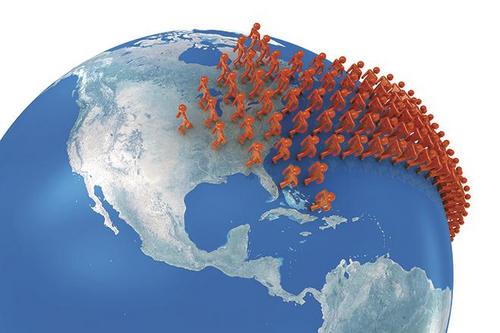 First of all, the image of gazillions of foreigners marching in orderly battalions to the United States looks more like an invasion of hostiles than the immigration of friendly individuals joining the American community. If the Chamber wants to scare average citizens, it is doing a swell job.

Plus, aren’t the foreigners coming from the wrong direction?? Shouldn’t they be coming from the south, from points below the Rio Grande, i.e. Latin America? Immigrants haven’t come en masse from Europe in nearly a century.

But the Chamber apparently wants to continue the fantasy that America is not being demographically altered forever by mass immigration — even as La Raza et al celebrate diversity and preach the virtue of obliterating white Americans whose ancestors built the country the multiculturists want to conquer. A major item of the Senate bill is the tripling of legal immigration for a decade, and they won’t be college graduates from Europe.

Oh, and here’s the letter:

The undersigned organizations urge the United States Congress to enact legislation that would bring meaningful reforms to critical components of our nation’s immigration system. Reform of an outdated, broken immigration system is essential if we are to achieve a fully revitalized economy that provides rewarding and lasting jobs and opportunities for all Americans.

Thought leaders from across the ideological spectrum agree that enacting immigration reform now will accelerate U.S. economic growth at a critical time when it has struggled to recover, and will help to enable sustained growth for decades to come. Done right, reform will also serve to protect and complement our U.S. workforce, generating greater productivity and economic activity that will lead to new innovations, products, businesses, and jobs in communities across the U.S.

We deal with an immigration system that is now in its third decade and completely incapable of being responsive to an ever-changing national economy and hypercompetitive global marketplace. Today, the problems with our immigration system have grown and multiplied to become an emerging threat to the current and future productivity, ingenuity, and competitiveness of key sectors of our economy, including agriculture, housing, manufacturing, retail, hospitality, tourism, engineering, and technology.

We are united in the belief that we can and must do better for our economy and country by modernizing our immigration system. We already have been engaged with many members of Congress — Republicans and Democrats — on numerous components of a modern immigration system, and we urge that you not let this momentum slip and progress vanish.

Failure to act is not an option. We can’t afford to be content and watch a generation-old immigration system work more and more against our overall national interest. Instead, we urge Congress to remain mindful of the clear benefits to our economy if we succeed, and work together and with us to achieve real, pro-growth immigration reform.