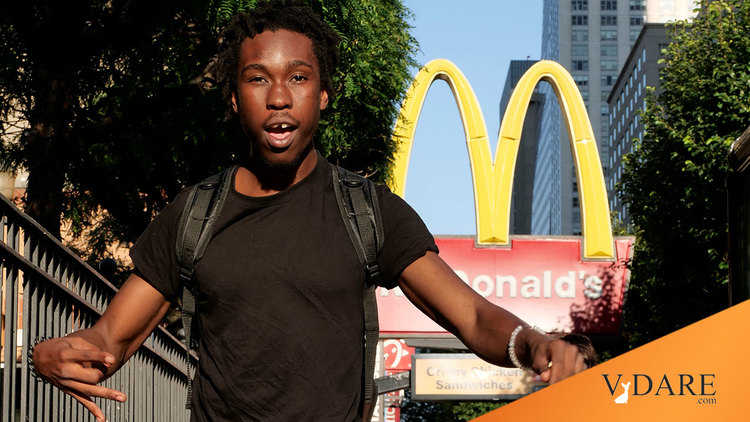 A hypothetical question. Remember… only asking for a friend.

What would life be like in America if there were no black population? Seriously? What would happen if our nation weren’t run by a philosophy and ideology eerily similar to McDonald’s 365Black concept?

Now, think the converse: What if America had no white population? Look no further than what just happened in less than 15 percent white Jackson, Mississippi for the answer.

Which brings us to this interesting tidbit out of Chicago, the home of the Fortune 100 company famously going 365Black more than a decade ago as part of the overall marketing strategy.

New YorkCNN Business — McDonald’s CEO Chris Kempczinski has big concerns about surging crime in Chicago, where the fast food giant is based, saying it is impacting the company’s restaurants and making it harder to recruit corporate talent.

Crime is “seeping into every corner of our city,” Kempczinski said during an event at the Economic Club of Chicago Wednesday.

“Everywhere I go, I’m confronted by the same question these days — what’s going on in Chicago? While it may wound our civic pride to hear it, there is a general sense out there that our city is in crisis.”

Kempczinski said that McDonald’s (MCD) restaurants in the city are suffering, noting that there are about 400 of the chain’s locations across Chicago.

The Chicago Mayor’s Office did not immediately respond to a request for comment on Kempczinski’s remarks.

Starbucks (SBUX), too, has noted similar problems at some of its stores.

Over the summer, the coffee chain announced it would close 16 locations in Seattle, Los Angeles, Philadelphia, Washington, DC, and Portland, Oregon over safety concerns.

“After careful consideration, we are closing some stores in locations that have experienced a high volume of challenging incidents that make it unsafe to continue to operate,” a Starbucks spokesperson told CNN Business at the time.

Like Kempczinski, Starbucks’ leaders said that national and community dynamics tend to play out in their stores.

Kempczinski pointed to several high-profile corporate departures from the city, including Boeing, Caterpillar and Citadel, which all recently announced plans to relocate their headquarters. He said that mayors and governors from other cities and states have reached out to McDonald’s to consider doing the same.

McDonald’s on Wednesday announced plans to open a new innovation facility at its Chicago headquarters, relocating employees from its current innovation center in Romeoville, Illinois.

What would the quality of life be in the United States of America if there were no black population? Would McDonald’s CEO be discussing a crime problem in Chicago and what that is doing to the company, when we know violent crime in almost exclusively committed by blacks in The Second City?

Asking for a friend…

If McDonald’s promoted the idea of 365White, would the CEO of the company also be complaining about the violent crime in Chicago…?

Some truths flush out the lies of modernity all to easily.