The beautiful and historic National Mall in sight of the Capitol has been turned into a campground for lawbreaking foreigners who demand legalization. By the looks of their ginormous tents, they intend to stay a long while. Why is this permitted?! 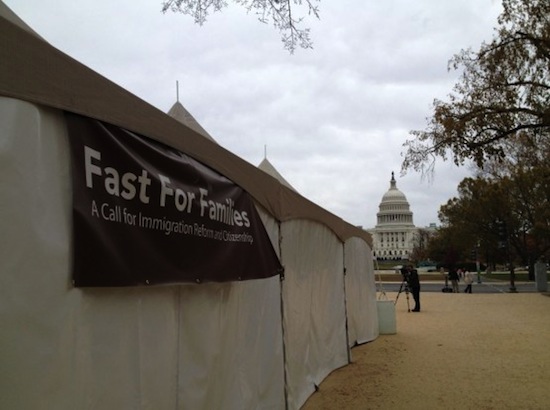 But we shouldn’t be surprised. It wasn’t that long ago (October!) that the park allowed an elaborate amnesty stage show while fencing off the WWII Memorial from America’s aging heroes (see National Mall Welcomes Amnesty Demanders, but Not Veterans).

Hunger strikes have been a handy tactic for Marxican moochers, like the Chicago illegals who fasted last year for free-to-them organ transplants.

Below, an anti-sovereignty activist fasted to protest Minutemen border defenders in 2005. 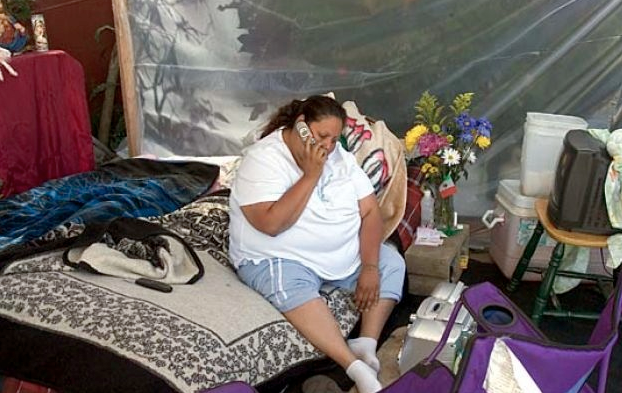 Unsurprisingly, on Thursday Catholic Bishop John Wester of Salt Lake City (contact info) dropped by to lend his support. You wouldn’t expect him to condemn unlawful behavior, would you? The Catholic church elite believes the poor have a right to ignore law and borders when they want upgrade their lifestyles. “Any family in economic need has a right o immigrate, that’s our posture,” according to a Texas spokespriest. How convenient, since most illegal aliens are hispanic Catholics.

WASHINGTON The tents on the southeast corner of the National Mall were nearly empty this afternoon, with the activists inside receiving visitors quietly and with little fanfare.

Just two blocks west of the U.S. Capitol, those inside have pledged to a daily fast until Congress passes comprehensive immigration reform.

Organizers of the campaign, called ”Fast for Families: A Call for Immigration Reform and Citizenship,” have set up visits to those fasting by members of Congress, prominent organizers, and faith leaders.

Salt Lake City Bishop John Wester was among those making a visit Thursday. He stopped by for about half an hour in the afternoon, and spent about 20 minutes with the people fasting, who are not speaking publicly or taking interviews during their witness.

Speaking to NCR after making his visit, Wester said he was “taken and touched by their commitment to immigration reform.”

Our Nov. 8 edition features our popular Colleges & Universities special section. These articles are only available in our print newspaper or Kindle edition, so become a subscriber today!

“I’m very grateful because I’m hoping that it will communicate to our people in the United States the need for immigration reform — that it’s not just politics,” he said.

“This is a human issue that calls for courageous action on the parts of our elected officials. And for every day that they dally and dither and don’t do anything, people are suffering.”

While the Senate passed an immigration reform bill in June, House Speaker John Boehner (R-Ohio) said Wednesday he would not be allowing his chamber to take up the measure before the end of the year.

Organizers of the tent fast have set up similar campaigns in states across the country and hope their witness will pressure Boehner to allow a vote on the issue.

Asked how he would speak to Catholics who are not supportive of immigration reform, Wester said “you can’t ignore what’s going on because it’s a human issue.”

“In my diocese of Salt Lake City, 80 percent of the Catholics speak Spanish,” he continued. “So we can’t just ignore them and pretend it doesn’t exist. We have a moral responsibility to speak up and to let our elected officials know this is urgent and we have to reform. If we don’t do that, then our elected officials won’t get the message.”