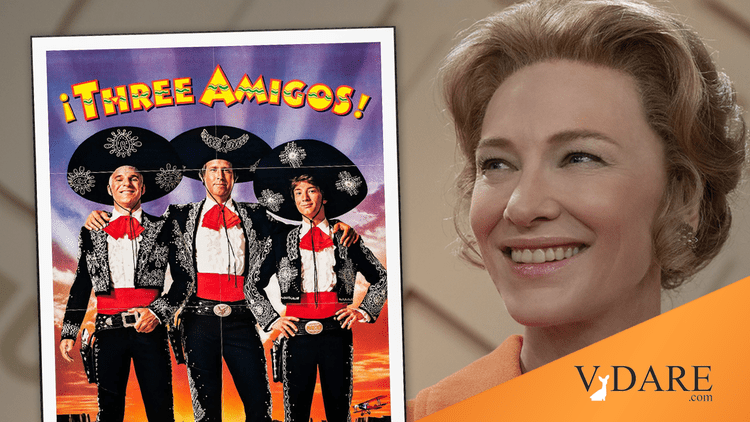 Cate Blanchett And The Three Amigos

Cate Blanchett is playing conservative activist Phyllis Schlafly, who defeated the Equal Rights Amendment, in a miniseries entitled Mrs. America on Hulu, with Tracey Ullman as Betty Friedan, who courageously tried to resist the lesbian takeover of feminism until finally capitulating to what she had long presciently denounced as the “lavender menace” in 1977. (Of course, the poor lesbians are now largely defeated by autogynephilic he-men claiming to be women, so what goes around comes around.)

The problem for Cate is that many of her former fans are angry at her at bringing her considerable skills to playing The Enemy. So she has penned an op-ed in the NYT to remind them she doesn’t actually oppose the Equal Rights Amendment like her character did:

Cate Blanchett: I’m Not ‘Mrs. America.’ That’s the Point.
Art allows us to investigate, illuminate and hopefully understand the apparent gap between us.

By Cate Blanchett
Ms. Blanchett is a producer and actor.

Actually, Ms. Blanchett is, first and foremost, an actress.

It’s pretty sad when a great actress has to explain to her progressive, graduate-degreed fans that she isn’t the same as the character she plays on TV.

From another perspective, it was pretty funny when the villagers of Santa Poco in 1916 didn’t realize the actors who played the Three Amigos weren’t actually the same as the characters they portrayed in the moving pictures: