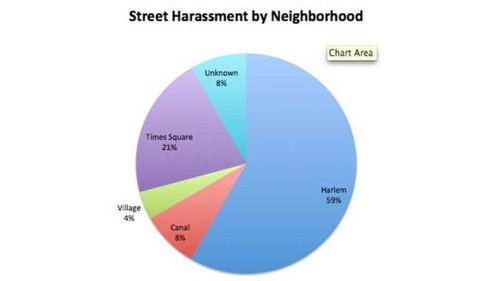 Chris Moore in MassAppeal creates a graph and table of where all the incidents of harassment occurred in the famous 10 Hours of Walking through New York viral video.

And three of the five Times Square incidents are at the Port Authority Bus Station. And the touristy section of Times Square is full of paid touts approaching people cold to try to get them to patronize various dives. For young ladies who have to take the bus to work via Porth Authority and then walk across Times Squares, it’s annoying, but not the Taxi Driver dystopia of a generation ago.

At Medium, there is a long po-faced discussion of how methodological unsoundness (novelist Joyce Carol Oates is drubbed once again) may have allowed White Male Privilege to slide by unscathed again:

Over at Twitter, David Chen makes another important point: This video was designed to “go viral” and a video that started with a few white guys doing the catcalling might not have.

Right, because there’s no market for evidence of White Men Behaving Badly. That’s why Law & Order had to switch from exposing the tidal wave of murders committed by the denizens of Park Avenue to spend decades focusing on some Dominican shooting some Puerto Rican in an argument over a piece of chicken — because that’s what the Nielsen ratings and the advertisers want: made-up stories of violent low-brow NAMs, when we all know the real murderers live in co-op apartments on the Upper East and Upper West Sides.

It’s a giant conspiracy by the straight white Mormon Republican men who control the media to cover up their own people’s homicidal tendencies. If you aren’t aware of that fact, you must be some kind of wacko conspiracy theorist.

Seriously, I could see a reasonable argument that if there’s one street in America where African-Americans should be permitted to pursue the nonviolent forms of acting African-Americany (e.g., making a verbal pass at every woman who walks by), it’s 125th St. in Harlem.

If you do want to come up with a conspiracy theory about all of this, consider how valuable real estate in Harlem would be (it’s the neighborhood just north of Central Park — contrast it with the real estate values in the neighborhoods on the other three sides of Central Park: Upper West Side, Midtown, Upper East Side) if white women could walk around without being hassled by lowlifes because all the lowlifes had left. There’s a fortune to be made in Harlem real estate if, say, a viral video encouraged a Broken Windows police effort to ticket black and Latino men in the name of gender equality and encourage them to move to the exurbs.