On Wednesday, Senator Jeff Sessions (pictured) issued a press release stating his continued resistance to Obama’s promise of an unconstitutional executive amnesty for millions of lawbreaking foreigners. “Americans do not want their borders erased,” he noted.

Senator Sessions has already explained that he plans to use Congress’ control of spending to throttle Obama’s amnesty. He is well positioned to do so, given that he will be Chair of the Senate Budget Committee in the next legislative session starting in 2015.

Thursday’s Talking Points Memo sketched out the strategy for the upcoming amnesty fight: Republican Congress Gears Up For First Epic Battle With Obama

[. . .] McConnell pledged to use government spending bills to rein in Obama’s immigration actions, telling TIME magazine after the election that “the way that you push back on executive overreach is through the funding process.”

While McConnell expressed wariness of allowing a government shutdown, Sen. Ted Cruz (R-TX) has called on Republicans to fight it with every weapon in their arsenal. Thickening the plot is Sen. Jeff Sessions (R-AL), who has set up an active war room dedicated to undermining Obama’s plans on immigration, and is next in line to chair the Budget Committee. From that perch, he would have the power to set spending parameters that undermine the president’s moves. [. . .] 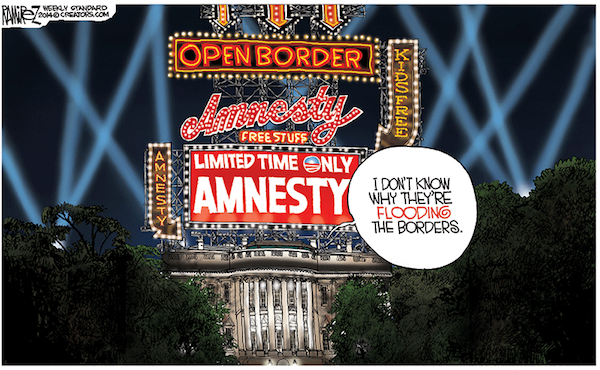 Sessions: GOP Will Fight Exec Amnesty, ‘Surrendering to Illegality Is Not an Option’, November 5, 2014

Of course, Congress has acted, and so have the American people. Republicans, and the voters who sent us here, rejected the Obama-Democrat legislation to give work permits to illegal immigrants and to surge already-record immigration rates. The President cannot, having had his policies defeated at the ballot box, impose them through executive decree.

A Republican Congress will defend itself and our citizens from these lawless actions. Surrendering to illegality is not an option. Democrats will have to choose sides: protect the President’s agenda, or protect your constituents.

Americans do not want their borders erased. What they have asked for is an agenda that promotes higher wages, reforms government, eliminates failed programs, balances the budget, increases energy production, and protects their sovereignty.”