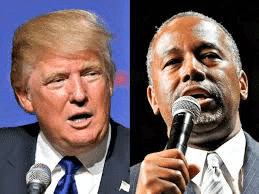 Carson And Trump: Time To Consider the Bradley/Wilder Effect

Over the past few months keeping up a Google News search on “Trump” and refreshing it from time to time has been great fun (I use the ‘Past hour’ filter). I would say about 85% of the news stories are skewed anti- Trump. The Op-ed rate must be 99%. The volume of stories is of course enormous.

As a result of this I have seen scores of articles telling me that polls are meaningless/wrong/misleading. Somehow this has ceased to be so now Quinnipiac has published an Iowa Poll showing Ben Carson ahead of Trump 28% to 20% compared to a 21% to 27% deficit in September.

Two points need to be made about this poll

What is going on here? I suggest the Trump support is being understated by a kind of reverse Bradley/Wilder effect. This is named from the observation that when Tom Bradley lost the governor’s race in California in 1982 and Douglas Wilder won the Virginia governor’s race in 1989 their results were appreciably weaker than polls had suggested. The idea was that respondents were reluctant to admit they did not want to vote for a Black.

A generation later the issue is that admitting you support Trump is very likely to unleash vicious rage from Leftists and petulant hostility from Conservatism Inc types. Supporting Trump is not cool! I have experienced this in my own family circle.

So the easy way out is declaring for Carson. But that proportion of the Carson which is really anti-Establishment is likely eventually to go for Trump. Carson’s extraordinary numbers are probably much bloated by covert Trump sympathizers

There is a core group of GOP voters this year who are intent upon nominating someone from outside the political mainstream. Their candidates are Carson, Trump, and Fiorina. We can expect that number to churn between them and unless some of their support falls away to ‘traditional’ candidates one of them will take the nomination.

(Hope that doesn’t get him Ericksoned!)

But more to the point he is terrible on immigration as I observed in Trump Versus Carson: Polar Opposites On Immigration, Amnesty and Deportation