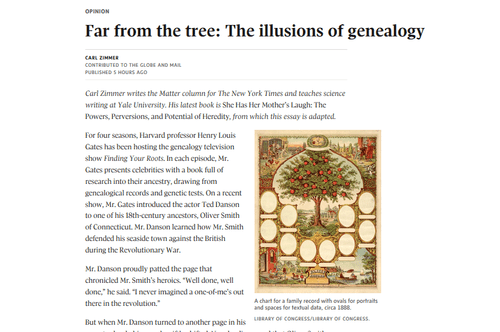 Carl Zimmer: "Far from the Tree: The Illusions of Genealogy"

From the Toronto Globe & Mail:

Far from the tree: The illusions of genealogy
CARL ZIMMER

UPDATED JULY 13, 2018
Carl Zimmer writes the Matter column for The New York Times and teaches science writing at Yale University. His latest book is She Has Her Mother’s Laugh: The Powers, Perversions, and Potential of Heredity, from which this essay is adapted.

… We inherit one copy of each chromosome from our mothers and the other copy from our fathers. They inherited their chromosomes in turn from our grandparents. Which copy of a given chromosome gets passed down from a parent to a child is mainly a matter of chance. That flip of the genetic coins has a remarkable consequence: As you work your way back through your ancestry, you’ll encounter an ancestor from whom you inherited no DNA at all. And the further back you go, the more of those ancestors you’ll meet. Graham Coop, a geneticist at the University of California, Davis, has estimated that if you look at your ancestors from 10 generations back, almost half of them will have no genetic connection to you.

Think of your genetic inheritance as two huge decks of playing cards from two different solitaire games being shuffled ineptly by a child with clumps of cards remaining unshuffled. Because the shuffling is imperfect, you might get sequences of cards that showed up in a previous game. But after, say, ten shuffles, even maladroit shuffles, the odds are below 50% that you’ll get any sequences that were played ten games ago.

Same with inheritance. Winston Churchill wrote an enormous biography of his distant ancestor John Churchill, the first Duke of Marlborough, to remind voters that the blood of a hero flowed in his veins. And perhaps Winston did inherit some alleles directly from John. Or perhaps not. It’s more likely that Churchill got more of his crucial genes from his mother’s and paternal grandmother’s lines.

On the other hand, being Dukes, there weren’t a large number of high-enough ranking people for Churchills to marry, so they might well be somewhat inbred, which would increase the likelihood of Winston inheriting some genetic combination unchanged from John.

On the other other hand, John Churchill being such a dynamic general and politician is how he got the hereditary title of Duke of Marlborough and enough money (barely) to build 300,000 square foot Blenheim Palace, where Winston was born. And being an English Duke is not a bad thing in the mating market, which meant that Churchill’s ancestors tended to marry fairly well, such as the first Duke’s daughter marrying a Spencer (which is why Winston was Spencer-Churchill until his dad decided just Churchill would be better politically), and Winston’s dad marrying Jennie Jerome, whose dad was known as the Lion of Wall Street.

Discovering that we are descended from someone famous makes us feel special, but that feeling is another genealogical illusion, based on a faulty picture we have of family trees. We picture them as forever branching in two – two parents, four grandparents, eight great-grandparents and so on. If that were forever true, your family tree over the past few thousand years would contain more people than have ever lived.

In fact, our family trees don’t branch outward forever. Our ancestors are related to each other, either as close cousins or distant ones. The diverging branches of our ancestry eventually fold back in on themselves.

But of course that’s exactly where race, which Zimmer claims not to believe in, comes from. Winston Churchill may or may not have shared much genetically with John Churchill relative to other whites, but he shared a lot genetically with white people in general. (By the way, Winston liked to believe he was 1/16th American Indian through his American side of his ancestors, but I haven’t found much evidence for that.)

Why was Winston Churchill so instantly identifiable as white? Well, because of “pedigree collapse:” if you go back ten generations, there are 1024 slots in Churchill’s family tree. Did he have 1024 unique ancestors ten generations back? Maybe, maybe not. In a mostly outbreeding Christian culture, he probably wouldn’t have vastly less than 1024, but the odds are he would have some individual ancestors doing double duty (or more) in his family tree.

The merged geometry of our family trees has its own astonishing consequence: If you could pick two strangers and follow their ancestry back through time, it wouldn’t take all that long to find a common ancestor. In Europe, some of the people who lived a thousand years ago are the ancestor of every living European. Charlemagne is likely one of those common ancestors.

Genghis Khan is likely another.

If you go back a few thousand more years, you’d find people who are ancestors of all living people on Earth.

I suspect this isn’t technically true, that there are, say, Andaman Islanders and Bushmen who have no common ancestors for more than a few thousand years. On the other hand, it’s not unlikely that, say, a majority of on earth today might be descended from a single individual, perhaps some chariot warlord from the early bronze age steppe.

But the more important lesson is that wondering about individual flukes of family trees is, while interesting, a distraction from the more important genealogical lesson that most people aren’t Tiger Woods and thus are more related to some people than they are to other people, which is where we come up with the idea of races.

Zimmer’s problem as an intellectual is that he has a hard time keeping in mind two seemingly opposed ideas simultaneously.
[Comment at Unz.com]