… Carjacking reports are up 120% in Chicago this year as of October 24, according to CPD records, with 1,018 cases reported. There were 463 carjackings in the same period last year.

Carjackings used to be so bad in Brazil that Sao Paulo’s rich took to traveling only by helicopter. Is this what Joe Biden wants in the Biden Era?

Chicago’s surge in gun violence and two rounds of downtown looting have grabbed most of the attention of police and politicians this year, but a review of crime data shows the extent of another crime problem plaguing every corner of the city in 2020: carjackings.

Through Oct. 3, there had been 914 carjackings in Chicago this year, more than double the number seen through the same date in 2019 and the most the city has seen in that period since 2003, according to the city’s online crime data. Out of the Chicago Police Department’s 22 patrol districts, 16 have seen carjackings more than double so far in 2020, and in part of the North Side they have quadrupled.

I used to live on Chicago’s North Side.

Chicago police officials said they began noticing the spike earlier this year, even before the COVID-19 pandemic and the fallout over George Floyd’s death at the hands of police in Minnesota coincided with violent crime surges throughout the U.S., including in Chicago. But in the months since, Chicago’s carjacking problem has only gotten worse.

Brendan Deenihan, the Chicago Police Department’s chief of detectives, said carjackings already were up by 64% through April compared with last year. But he noted the increase only became greater as 2020 progressed, particularly amid the chaos as civil unrest spread throughout the city following Floyd’s death.

“The numbers are extremely high,” Deenihan said in a Tribune interview Tuesday. “Since really the beginning of June and then through July and August when the civil unrest started the carjackings really spiked out of control.”

Deenihan said the public’s mainstream use of masks due to the coronavirus has likely been a contributing factor. It has made it easier for criminals to conceal their identity, perhaps emboldening some….

Also contributing to the spike could be the age of the perpetrators, according to Deenihan. More than half those arrested for the crime so far in 2020 have been under 18, he said, compared with juveniles making up 32% of arrestees a year earlier.

As a result of a change in the state law that took effect at the start of 2016, a carjacking charge when a weapon is used no longer triggers an automatic transfer to adult court for juveniles, where the consequences are often far more severe.

Carjacking can be difficult to prove in its own right, he said, which also contributes to repeat offenses.

“If you’re just arrested for (possession of a stolen motor vehicle) because we can’t prove up the case of (a carjacking), then more than likely these juveniles are right back home and creating problems for us,” Deenihan said. …

For example, in the Town Hall District, including North Side areas such as Lakeview, Uptown and Lincoln Park, carjackings have quadrupled, going from five through Oct. 3 in 2019 to 23 during the same period this year, the online crime data show.

I spent most of my free time from 1982–2000 in Lakeview, Uptown, Lincoln Park, Rogers Park, Central, Far North Side, and Near North.

The Rogers Park District on the Far North Side saw carjackings spike from 6 to 17, according to the data. And the two districts that cover downtown, Central and Near North, saw a combined total of 52 carjackings through Oct. 3 compared with 22 last year.

The increase comes as Chicago has seen spikes of over 50% in total shootings and homicides in 2020 compared with last year. But overall reported crime in the seven major crime categories, including crimes like burglary, criminal sexual assault and theft, had dropped by 7% through Sunday, police statistics show.

Thanks goodness that crime has dropped in the discretionary categories but not in the mandatory reporting categories. 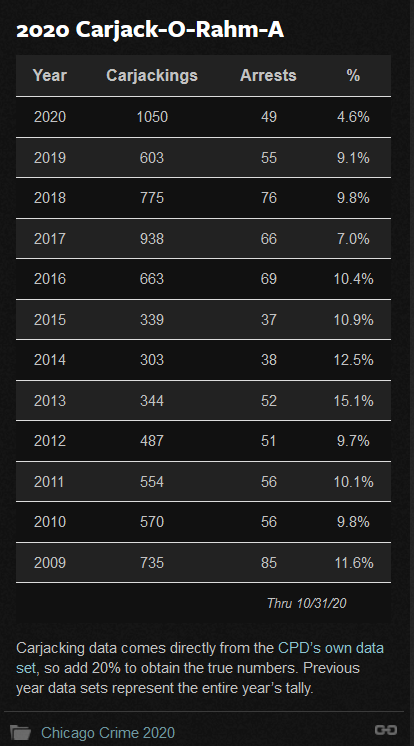 Police say 2,300 vehicles have been stolen so far this year in the District, up 44 percent from this time in 2019. Carjackings in that time have jumped from 100 to 193, with the biggest increases in the 4th, 5th, 6th and 7th police districts.