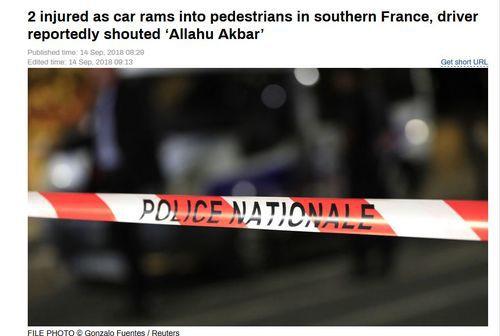 This is barely even news anymore. This is simply the new normal of European life. The story is still developing, but it will be interesting to see what the investigation reveals. The danger is not just from terrorist attacks or organized cells. There are also the spontaneous explosions of rage deriving from a permanently alienated mass of people plopped down into the midst of a foreign culture. This is what we refer to as "Immigrant Mass Murder Syndrome."

Still, aside from the reports that the driver shouted the Islamic battle cry, there have been no further reports about the driver's identity or motivation. We will keep you posted.

A car hit pedestrians near a bar in Nimes overnight, slightly wounding two people, AFP reports. Witnesses reportedly heard the driver shouting “Allahu Akbar,” but there is no official confirmation of a terrorist attack so far.

A white Peugeot crashed into a security barrier set up for a popular bullfighting festival around 1am Friday (11pm GMT Thursday), according to AFP. The driver, reportedly a 32-year-old man, tried to flee but was arrested at the scene.

An investigation was opened for "attempted murder," local prosecutor has announced. However, witnesses claim that the suspect was shouting “Allahu Akbar,” according to local media.