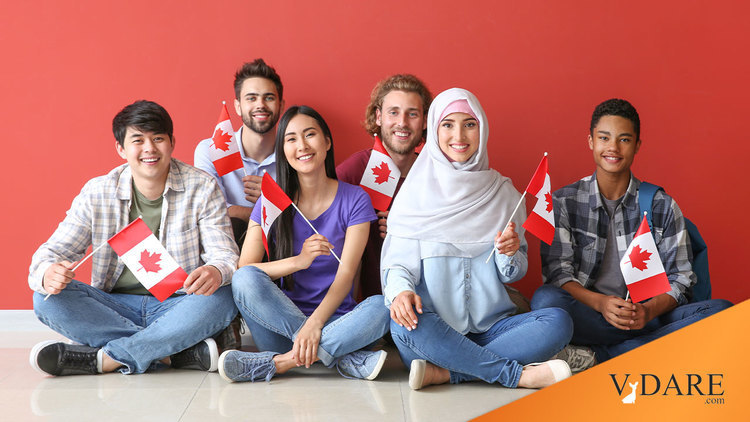 Our northern neighbor shows that do-gooder aspects of immigration needn’t be masochistic self-flagellation for the receiving country. By contrast, the United States of Obama is currently doing a doormat imitation by its reaction to a new invasion gimmick of demanding asylum using just the right complaint phrase, namely that the pesticans have a “fear of persecution.” Mexicans et al are mouthing the correct words, even though their situation is one of high crime, not state oppression.

By that standard, Chicagoans could claim asylum in welcoming welfare havens like Sweden or Britain.

Canada has reasonably determined that not all nations are gulags of torture and cruelty. Claimants from genuine totalitarian states are therefore accorded more credibility than likely moochers.

Interestingly, the article below observes that a number of Mexicans have been admitted under the new rules. Some Mexes — specifically police officers, government officials and journalists who have opposed the cartels — might be allowed entry given the criteria of genuine individual danger. But that Canadian policy is entirely different than the surrender to invasion happening now in the US Southwest.

Michael Coren, of Canada’s SunTV, defended the new policy from accusations of it being mean-spirited from the usual open-borders suspects and diversity cultists.

OTTAWA — Little more than six months after the government first unveiled a list of so-called “safe” countries considered to be unlikely producers of refugees, the number of asylum claims has dropped dramatically.

In total, Canada received half as many asylum claims in the first half of this year as it did during the same period last year — 4,558 compared to 10,375.

Between January and June of this year, Canada’s Immigration and Refugee Board (IRB) received just 104 claims from Hungary — once the chief producer of asylum seekers, many of them Roma, and a particular concern for the federal government which has argued many of them are illegitimate and merely abusing the system.

During the same period last year, Canada received 13 times as many claims from Hungary — 1,389 of them to be exact.

Meanwhile, 68 claims from Mexico — another mega producer of refugee claimants — were referred to the IRB during the first six months of this year. During the same period last year, Canada received 224.

“This is proof that our government’s reforms to Canada’s asylum system are working. We have seen a significant reduction in the number of claims from countries that have traditionally had high numbers of unfounded claims,” Immigration Minister Chris Alexander said in an email.

“This is good news, especially for genuine refugees whose cases are heard more quickly and benefit from Canada’s protection sooner.”

Between Dec. 15, 2012 and May 31, 2013, Canada added 37 nations to a designated country of origin list introduced as part of a massive refugee reform bill. Because Canada considers these countries to be respectful of human rights and more likely to offer state protection, claimants from these countries are treated differently. They now have their cases expedited, those who are denied refugee status have no right to appeal to the new Refugee Appeal Division and they are deported more quickly.

“Focusing on how to reject people more quickly who don’t deserve protection . . . means also that you’re not giving enough time for some people who do need protection to make their case,” she said.

“Having fewer claims seems to be a goal of government when we would have thought saving more people’s lives would be something we should be happy about.”

Figures obtained by Postmedia News suggest the government is also getting close to meeting new timelines set for determining whether a claim from a designated country is valid or not. According to the IRB, it takes an average of 57 days to make such a determination. The government has vowed to get that down to 45 days.

That said, the board has exceeded expectations when it comes to non designated countries. New guidelines call for determinations to be made within 216 days. The IRB said it now takes, on average, just 86 days for a file to be processed. However, it still takes about 20 months to process older files received before the new rules took effect, according to the IRB.

The figures also don’t account for the time it takes to deport an unsuccessful claimant following a negative decision. However, the Canada Border Services Agency, which is responsible for removals, said it deported 6,345 failed refugee claimants between January and June 2013. The agency could not immediately say which countries the individuals were deported to.

Meanwhile, the IRB approved just a third of all asylum claims during the first six months of this year, a slight drop from 35 per cent during the same period last year.

Of the 680 Mexican claims that were completed, 19 per cent were accepted compared to 15 per cent the previous year.

Dench said she’s disappointed to see acceptance rates continuing to drop. Up until 2010, she said, they typically stood over 40 per cent. Given all the restructuring at the IRB after the new refugee determination system was put in place, she expected new adjudicators would err on the side of caution. Instead, she argues, it appears they’ve bought in to the prevailing “negative” view of refugees as fraudsters and queue-jumpers. Between that and the government’s desire to clear cases quickly, she fears bona fide refugees are falling through the cracks as a result.

The fact that 183 Hungarians and 132 Mexicans were accepted as legitimate refugees, “tells us clearly that these are not safe countries,” she added.

“It just confirms how wrong it is for Canada to be labeling certain countries such as these as being safe.”

According to the figures, no other counties with a “safe” designation produced that many bona fide refugees this year. The next closest was Croatia with 28 accepted claims.