In October of 2009, the freighter Ocean Lady appeared off the coast of British Columbia carrying a cargo of 76 Tamil men from Sri Lanka who sought asylum in Canada. They were promptly taken by the RCMP to Vancouver for screening.

(Canada is known for accepting a large number of asylum seekers to expand its diversity.)

If that group didn't look enough like a scene from the Camp of the Saints (the 1973 French novel of social collapse following shiploads of Asian economic squatters arrival in Europe), there was more to come.

Ten months later (August 2010) saw a jammed Camp-like ship the Sun Sea (pictured below) arrive in western Canada from Thailand, filled to the gunwales with nearly 500 Tamils who also intended to stay. 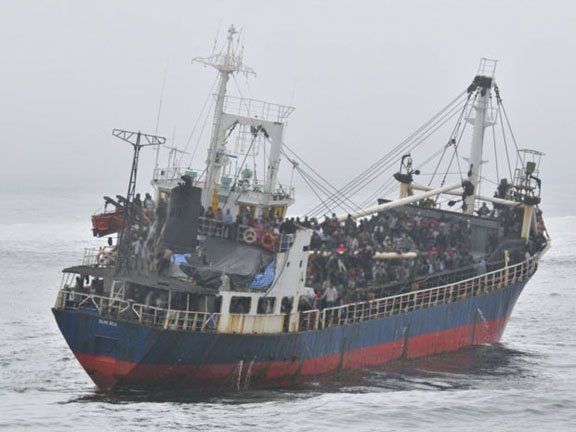 The would-be refugees each paid tens of thousands of dollars to flee Asia. The event was expensive for Canadian taxpayers as well:

The estimates are the first glimpse at the cost of dealing with the Sun Sea, which sailed from Thailand last May and was intercepted off the British Columbia coast in August. "This is not cheap," Jason Kenney, the Minister of Citizenship and Immigration, said in an interview on Tuesday.

The smugglers charged up to $45,000 a head to transport the 493 Sri Lankans to Canada. One man died at sea. All have claimed refugee status, including some the government is alleging are former members of the Tamil Tigers rebel group.

Just to make a complex situation even more diverse, a number of the would-be settlers were possibly dangerous Tamil Tigers, as noted. Although the separatist group is considered as simply political by some, the Canadian government regards them as terrorists and not desirable immigrant material.

The Tigers are unusually rough fellows, even for armed guerillas, according to Time magazine:

The Tamil Tigers of Sri Lanka are undoubtedly one of the most organized, effective and brutal terrorist groups in the world. They invented the suicide vest and, according to the FBI, are the only terrorist group to have assassinated two world leaders. The rebels, based in northern and eastern Sri Lanka, have been waging a violent offensive against the central government on and off for more than 20 years. Federal forces recently announced they had captured the Tigers' capital, Kilinochchi, but it's a safe bet that, regardless of territory lost or possibly dwindling ranks, the guerillas will not give up their fight willingly.

So identifying who among the boat people were Tamil Tigers was important to Canadian police, a desire which conflicted somewhat with the intent of the authorities to maintain the image of Canada as a welcoming country to the downtrodden. In fact, the first boatload of Tamils were held for a time, but were eventually released into the country.

The Tamils from the Sun Sea, however, have gotten more scrutiny. In March, a second boater was ordered deported because of being a Tiger.Â More recently, the government has begun to go after the ship's crew members as smugglers who should be deported.

Furthermore, the Canadians have launched an anti-smuggling program in Southeast Asia to match up with legislation aimed at preventing a massive Camp-of-the-Saints scenario blowing in from the Pacific.

So the upshot at this point for the Sun Sea asylum seekers is that Tamil Tigers and smugglers will be deported but everyone else will apparently be allowed to remain in Canada. Polling at the time of the Sun Sea's arrival showed Canadians across the political spectrum preferred the asylum seekers be sent home. However, over 300,000 Tamils reside in Canada and have been known to get noisy in public to support refugee members of their tribe.

However, there have been reports thatÂ additional ships carrying Tamils for Canada might be coming. Weakness in enforcement would certainly be a magnet.