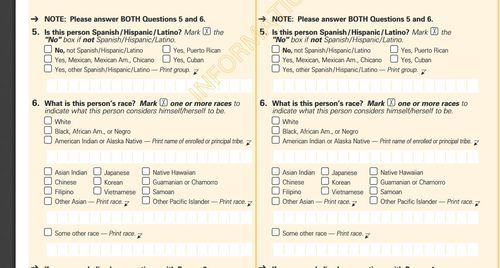 Can You Game The Census Form?

Of the eight questions on the typical 2010 Census form, two are about ethnicity and race:

NOTE: Please answer BOTH Questions 7 and 8.

Asked since 1970. The data collected in this question are needed by federal agencies to monitor compliance with anti-discrimination provisions, such as under the Voting Rights Act and the Civil Rights Act. State and local governments may use the data to help plan and administer bilingual programs for people of Hispanic origin.

The next question is:

8. What is Person 1’s race? Mark one or more races to indicate what this person considers himself/herself to be.

Asked since 1970. Race is key to implementing many federal laws and is needed to monitor compliance with the Voting Rights Act and the Civil Rights Act. State governments use the data to determine congressional, state and local voting districts. Race data are also used to assess fairness of employment practices, to monitor racial disparities in characteristics such as health and education and to plan and obtain funds for public services.

Two general forms of resistance to these questions have been advocated:

2. Cynical — Identify yourself as a member of a legally protected minority even if you are not, or your claim is far-fetched (e.g., "I'm African-American because my ancestors left Africa around 50,000 years ago") in the hopes of legally entitling you to affirmative action benefits.

Please correct me if I'm wrong, but both attempts are likely to be counterproductive. In general, the people who benefit from disparate impact / affirmative action have spent a lot more time thinking about how to rig the system in their favor than you have about how to game it in yours. They've anticipated your every move.

For example, during the 1990s, some individuals with parents of different races began a successful campaign to be allowed to check more than one race box on the Census form so that they wouldn't be forced to choose between their parents. The Census Bureau said okay to that, at which point, the race lobbies such as the NAACP went nuts because if the data was interpreted in a reasonable matter (e.g., assigning fractions based on how many boxes checked), then their quotas would be smaller. So, just before the 2000 Census, Bill Clinton announced that people could check more than one box, but only the non-white boxes would count for calculating the size of quotas and doing disparate impact calculations.

So, the organized pressure groups have thought about this a lot harder than you have.

For example, if you are a non-Hispanic white person who fills in his race as "Human" or "American," you have merely made the burden the government imposes on your family members via disparate impact lawsuits worse.

My understanding is that Census-like numbers are sometimes used to calculate the denominators in the EEOC's Four-Fifths Rule calculations, but not the numerators.

As far as I can tell, the best thing you can do for yourself and your loved ones is to answer these questions honestly. If you are white and non-Hispanic, and you put that down on the Census form, then the quotas for protected groups will be smaller than if you try to be clever and put down something else.

In a world of official and de facto disparate impact quotas, numbers count. And by diminishing the size of your group, you just make things worse for everybody in your group.