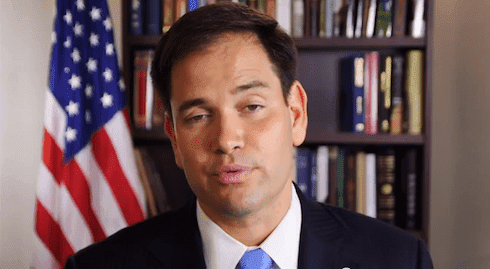 Can Rubio Make Peace With Conservatives on Immigration? Short Answer—NO

Though Marco Rubio is promising the Spanish speaking population of the United States (how unfortunate we even have to say that) he won't do anything to reverse Obama's Amnesty, he's still trying to fool the rubes in the conservative base.

Although not straining to bring up what to do about immigrants already in the country illegally, Rubio, who turned 44 this month, appears to be increasingly comfortable explaining why he decided they should wait longer before the government considers legal status for them.

In a May 1 appearance at a gathering of conservatives sponsored by the National Review Institute, the son of Cuban immigrants forcefully took on liberal activists who claim a “right” for immigrants in the country illegally to become citizens.

“There is no right to illegally immigrate anywhere in the world,” he told the crowd.

“What I’m saying to people is that we can’t do it in a massive piece of legislation,” Rubio said of reforming the immigration system and addressing the status of  illegal immigrants in an interview with Bob Schieffer of CBS News that aired April 19 on “Face the Nation.”

He said Americans have a message for their public officials about the more than 12 million living here unlawfully:  “We know we have to deal with this. We’re not prepared to deal with this until first you can prove to us that this will never happen again.”

[Can Marco Rubio Make Peace With Conservatives on Immigration, by Ken McIntyre, Daily Signal, May 26, 2015]

Is it ever a good idea to trust a politician, especially one who is telling people in other languages something different? Of course not. And yet Rubio's supporters tell us that they instinctively trust him.

“I will tell you from my observations that Marco Rubio is still a man of principle and conviction,” Tucker says in an interview with The Daily Signal...

“He will have some people who will never forgive him, who expect people to be perfect. I still trust Marco. That is my personal opinion,” she says, adding: “I’m going to get all kinds of crap about that, but I don’t care.”

That, in a single anecdote, is why the conservative grassroots gets taken for a ride again and again.

A politician qua politician can never be trusted. And what they feel or think about an issue isn't nearly as important as what they do on the issue. There, Rubio's record speaks for itself. After all, regardless of what he is saying, even now he is working to dispossess more Americans.

Can Rubio make peace with conservatives on immigration? A better question is whether Rubio can make peace with Americans who want their country to exist in a recognizable form in the years to come. Sadly, the answer to both questions is the same—no.