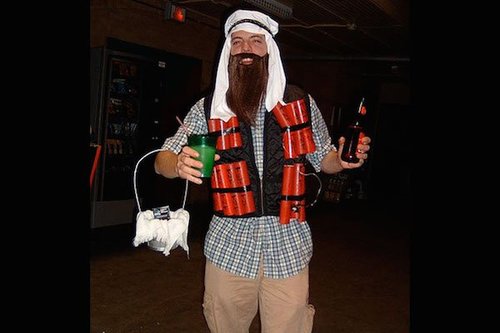 On Halloween, the New York Times reports about the application of politically correct thought to the winter holiday of sugar and dress-up. (But the front-page story did not include any bad pictures of what not to do — better be safe!) It explains why kids and adults are hectored to be very careful in choosing their costumes so nobody will be offended by edgy clothing statements. 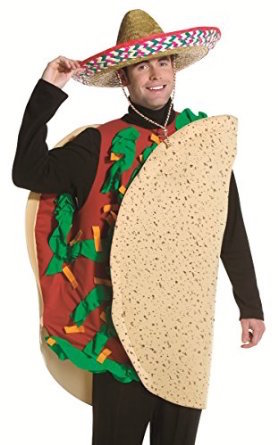 The effort to stomp out creative self-expression via costumes is part of propagandizing modern Marxist beliefs of socialism and diversity using culture as a weapon. One symptom is the demolition of free speech and demanding race-based sensitivity where the rules change constantly. How better to destroy freedom than by just make everyone shut up.

In other words, traditional Americans must carefully respect the culture of every other tribe on earth, but it isn’t necessary for immigrants to respect ours, like learning English when they move here.

Another example is how using the phrase “illegal alien” (which is legal terminology, not race abuse) can now cause a college student to get a lowered grade.

Halloween is an opportunity for ordinary citizens to criticize the failed diversity ideology ever so slightly. But that liberal sacred cow must remain sacrosanct or else shrieking will ensue.

So a simple Mexican-themed party where everyone wore a sombrero required the University of Louisville to issue an apology, as did a taco fiesta at Clemson. Funny, Mexicans dress like Americans all the time, particularly when they are crossing the border illegally.

Halloween Costume Correctness on Campus: Feel Free to Be You, but Not Me, New York Times, October 30, 2015

SEATTLE — Pocahontas, Caitlyn Jenner and Pancho Villa are no-nos. Also off-limits are geisha girls and samurai warriors — even, some say, if the wearer is Japanese. Among acceptable options, innocuous ones lead the pack: a Crayola crayon, a cup of Starbucks coffee or the striped-cap-wearing protagonist of the “Where’s Waldo?” books.

As colleges debate the lines between cultural sensitivity and free speech, they are issuing recommendations for Halloween costumes on campus, aimed at fending off even a hint of offense in students’ choice of attire. Using the fairly new yardstick of cultural appropriation — which means pretending for fun or profit to be a member of an ethnic, racial or gender group to which you do not belong — schools, student groups and fraternity associations are sending a message that can be summed up in five words: It is dangerous to pretend.

“If there’s a gray line, it’s always best to stay away from it,” said Mitchell Chen, 21, a microbiology major and director of diversity efforts at the Associated Students of the University of Washington. The university emailed to all students this week a six-minute video of what not to do for Halloween. 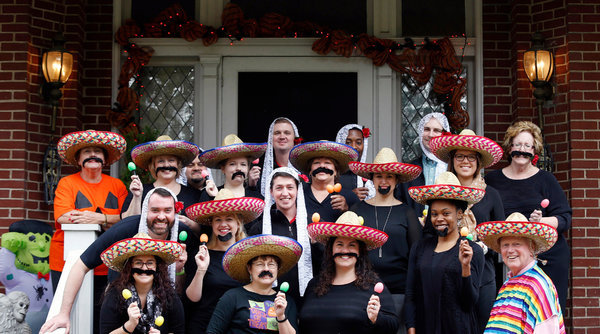 There has already been one major cultural collision this week that fanned the flames: On Thursday, the University of Louisville in Kentucky apologized to the school’s Latinos after its president, James R. Ramsey, was photographed wearing stereotypical Mexican attire at a Halloween party for staff members on Wednesday. In a picture posted online, Mr. Ramsey wore a sombrero and fringed poncho and stood next to university workers who were dressed as members of a mariachi band, with sombreros, maracas and fake mustaches.

The term “cultural appropriation,” which emerged from academia but has been applied more broadly — say, to refer to Washington Redskins fans wearing feather headdresses or white people in cornrows — has drawn ire from opponents of political correctness. But supporters say it captures a truth: that the melding of cultures is often about which group has the power to take symbols, styles or language from another.

The video issued by the University of Washington shows students from various ethnic groups and of various sexual orientations saying that almost any portrayal of them can cause a wound: For example, dressing in drag can denigrate the struggles of gay and transgender people.

Among students at the school’s Seattle campus, “it’s all over social media — people posting things like ‘How not to be offensive this Halloween,’ ” said Long Le, 22, an industrial design major. He will be at his job at McDonald’s on Halloween — so he will be dressing, he said, as a McDonald’s worker.

Mr. Le’s friend Charles Ekeya, 22, an international studies major, said he found some of the new costume warnings to be snicker-inducing — though he said he certainly understood that parodies taken too far could hurt.

“There’s been a lot of joking about it: ‘Oh, I can’t be an Indian this year because it’s inappropriate,’ ” said Mr. Ekeya, who plans to dress as Spider-Man. “It’s becoming a bigger deal than it should be,” he added. “Everybody is like, ‘Oh, we should be careful.’ ”

While some costumes are clearly offensive to all, not everyone agrees where the boundaries should lie. John Leo, who edits an online magazine about higher education for the Manhattan Institute, a conservative research group, characterized some of the colleges’ guidelines as “hypersensitivity to rules.”

“If you deal directly in stereotypes, you’re bound to irritate people,” Mr. Leo said. “But a lot of what passes for appropriation is simply normal costuming for Halloween, and I think that there’s a lot of oversensitivity to it. If it doesn’t seem mean or exploitative, I don’t see what the problem is.”

At Duke University, the Center for Multicultural Affairs has filled its Facebook page with images of young people holding up pictures of offensive stereotypes, including white people in blackface and a man dressed as a suicide bomber, with the hashtag #OurCulturesAreNotCostumes.

And at the University of Michigan, the dean of students has a webpagetitled “Cultural Appropriation — what is the big deal?” It urges students to ask themselves why they are wearing a particular costume, and then to consider how accurate it is in depicting a culture or identity.

“Still unsure? Don’t be afraid to ask someone!” the page urges. Photographs show students in acceptable costumes, including one dressed as Rosie the Riveter.

Students at various schools said in interviews that they viewed racial tension as the driving force behind many of the warnings, especially in the last few weeks, since stories about a fraternity party gone wrong at the University of California, Los Angeles, raised concerns at many schools. Some white students at the party dressed as Kim Kardashian and Kanye West, with smudged faces and exaggerated, padded body parts.

Fraternities, in particular, have been warned. The North-American Interfraternity Conference said in a message to its members last week that they should take “necessary steps to ensure that member organizations make responsible decisions regarding event themes, costumes and social media.” It added, “Our goal is for fraternities to avoid promoting concepts that reinforce historical stereotypes and mock or offend various cultures, races, ethnicities or identities.”

Will Foran, a spokesman for the group, which represents fraternities with 370,000 undergraduate members, said the holiday could still be fun. “This is not political correctness run amok, but an opportunity to put our best foot forward,” he said.

Halloween costumes that offend somebody, somewhere — whether they reference the gore of zombie culture or the sexism of a Playboy Bunny — have been a college tradition since long before the first fake rubber severed hand. The judgment call, social and fashion experts said, is how far to go in pretending to be someone else, and whether the effect is flattery or mockery. The difference is not always obvious.

“If you are inspired by something that originates from another culture and you want to incorporate it into your wardrobe or beauty-makeup routine, then it is fine because it comes from an honest place of admiration,” Laia Garcia, the associate editor at Lenny, an online newsletter, wrote in an email.

But Halloween, Ms. Garcia said, is now often about ridicule. “Dressing up as Pocahontas (or Sexy Pocahontas, let’s get real), is offensive because it takes the whitewashed version of a whole group of people that have been victimized and abused in their own land,” and presents it as “a thing one can just try for a night,” she said.

Some schools advise that borrowing from any culture is demeaning and insulting unless the wearer is a part of that culture. In other words, do not put on a karate outfit with a black belt, the University of Washington advised in the video it sent to students, unless you actually earned that belt.

The nature of risk itself, some media critics said, is what students are really debating.

“It’s always possible that someone will be offended by this or that costume or statement or position, but you can’t base your behavior on that chance,” said Mark Crispin Miller, a professor of media studies at New York University. “There has to be some room for stepping over certain boundaries.”

For all the worry about students’ seeking out the edge of shock or controversy on Halloween, a more innocent kind of hero-worship is alive and well.

Serena LaBounty, 20, a biology major at the University of Washington, said she planned to wear sweats and tell people at her Halloween party that she was Misty May-Treanor, the Olympic gold-medal-winning beach volleyball champion. Mr. Ekeya, the international studies major, said he was going as his hero as well.