Growth enthusiasts are relieved! Even a depression-lite economy of years duration won’t keep immigrants out, according to recent Census numbers. (Maybe the foreigners heard about the current administration’s generosity with free stuff for everybody.)

Whatever the reason, immigrants continue to pile in, even while citizens lower their baby production on account of tight family finances. The population of the United States has nearly reached 315 million, with immigrants continuing to supply a substantial part of the growth.

The United States reached the 300 million mark in 2006, with the enthusiastic approval of the pro-growth and pro-diversity crowds. Commerce Secretary Carlos Gutierrez enthused at the time, “We should all feel good about reaching this milestone.” More is better, particularly when it’s diverse.

The Census released some new population numbers on Thursday, with states as a focus. Below is one interesting map, and there are several others at this link. 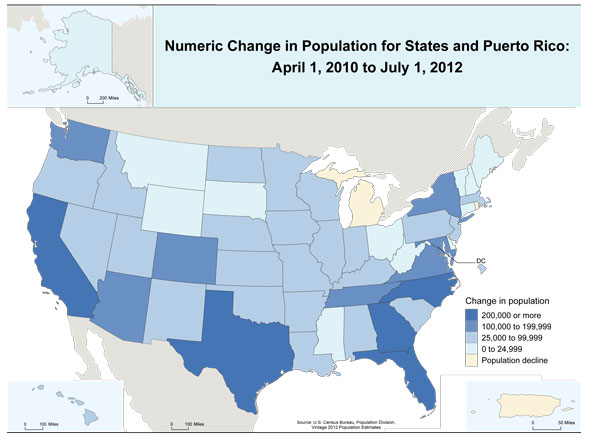 Immigration jumps, causing the population to grow faster even as the birthrate falls.

WASHINGTON — The pace of the nation’s population growth inched higher this year for the first time since 2006, boosted by a larger number of immigrants amid improving U.S. prospects.

In its annual state population estimates, the Census Bureau said Thursday that there were 313.9 million people in the United States on July 1. That is up 2.3 million from a year earlier, a growth rate of 0.75%.

Although that pace is still very slow by historical standards, it nonetheless marks a tiny increase after several years of declines, in which the growth rate had fallen to a level not seen since the 1930s.

And the increase of immigrants is one more indication that the powerful effects of the Great Recession are ebbing because immigration tends to rise when the U.S. job market improves.

California’s population rose at a slightly higher rate of 0.95%. Even as California lost more residents to other states, it had a net gain of 357,500 people, thanks to immigration and the natural increase — more births than deaths.

With 38 million residents as of July 1, California remains the most populous state in the nation. It had about 12 million more people than No. 2 Texas, which once again saw the biggest numerical increase in population of all states.

This year’s uptick in the U.S. population growth rate came entirely from a jump in immigration.

Even as the number of births in the U.S. continued to edge lower, about 885,800 immigrants settled in the U.S. in the most recent year, which ended July 1. That was about 110,000 more than in the same period a year earlier, according to the census data.

“We are now attracting more immigrants, a sign that the [prospects for] jobs are not keeping them away as much as the last few years,” said William Frey, a demographer at theBrookings Institution who analyzed the census data.

In California, long a hub of immigration, new arrivals from other nations added about 132,600 to the state’s population in the most recent year. The gain represented a 14% increase, the same as the nationwide rate of change. The census tally doesn’t differentiate between legal and illegal immigrants.

Nationwide, the number of new immigrants during the 1990s averaged about 1 million a year, but that fell to a low of 725,530 in the year that ended in July 2009 amid the weak U.S. economy and stronger growth in developing countries.

It remains to be seen whether immigration to the U.S. will return to levels of the 1990s. That should depend largely on the country’s economy and employment condition.

The Census Bureau is projecting that the nation’s population growth rate will remain around current levels for the next decade and then start to trend lower for many years to come, reflecting the aging of the country’s residents.

Among other factors that could push the growth rate down, “people are getting married at a later age, more are going to college, and there may be more women in the workforce as their contribution to family income becomes more important over time,” said Mark Mather, a demographer at the Population Reference Bureau, a private research group in Washington.

Still, the latest uptick in population growth is another sign of the rebounding economy.

Previously released census data showed the rate of people moving across county and state lines also turned up this year. More young adults are moving out of their parents’ homes, and as the job market has improved slightly and the housing market has begun to recover, more people are migrating to other states.

The recent recession and housing collapse had a particularly powerful effect on the population of Sun Belt states that had attracted flocks of people for some years. But now that those economies are starting to recover, they are beginning to attract more people and their populations are growing more quickly.

Between 2008 and 2011, Nevada, for example, saw more people move out of the state than into it each year. But in the most recent year, the state’s so-called domestic net migration turned positive once again. Arizona, another state where many Californians had moved during the housing boom, had its domestic net migration number quadruple.

Texas led all states in this category, with about 141,000 more people settling in that state than leaving it in the most recent year.

California, which in the middle of the last decade had a net exodus of more than 250,000 residents, had a negative domestic net migration of about 44,500 in the most recent year, slightly more than a year earlier.

New York saw the biggest net loss of residents to other states — almost 116,000. Illinois had the second-largest net outflow of residents, with about 73,500 more people migrating out of the state than moving into it.