After years of complaints from taxpaying California parents that their qualified kids were not being admitted to state universities, a recent report found that numbers of foreign students has skyrocketed over the last decade. So much for government accountability in a one-party Democrat state.

State universities insist they are broke and rely on the higher non-resident tuition to make ends meet. So foreigners and out-of-staters take more slots leaving fewer for residents.

A state auditor’s report released a few weeks back showed that universities lowered standards for non-residents to favor their admission. Meanwhile, the University manages to dispense financial aid for illegal alien students who are also taking up slots that should go to California citizen young people. The illegals get cash for school under the California Dream Act which is estimated to cost taxpayers $65 million this year (California: 20,000 Illegal Alien College Students Sign Up for Free-to-Them Money).

Like Washington, Sacramento’s motto is “Americans last.” And people wonder why Trump is winning.

The trend comes as learning abroad at a prestigious American university becomes more popular among foreign students, and as California public colleges increasingly count on the revenue generated by the higher tuition international students pay.

California schools enrolled about 205,000 foreign students in March, up from 99,000 in 2006, according to the U.S. Department of State. About 75 percent of those students were in public or private colleges.

That translates to about 5 student visas per 1,000 California residents. Only four states – Massachusetts, Rhode Island, New York and Delaware – had a higher ratio of student visas. Most of those states, like California, have renowned schools attractive to international students.

The most recent data on foreign student enrollment by individual college comes from 2014. Among California colleges, the University of Southern California enrolled the most international students in 2014, about 10,000, or almost a quarter of the student body, according to the U.S. Department of Education. Most of those students were in graduate school. 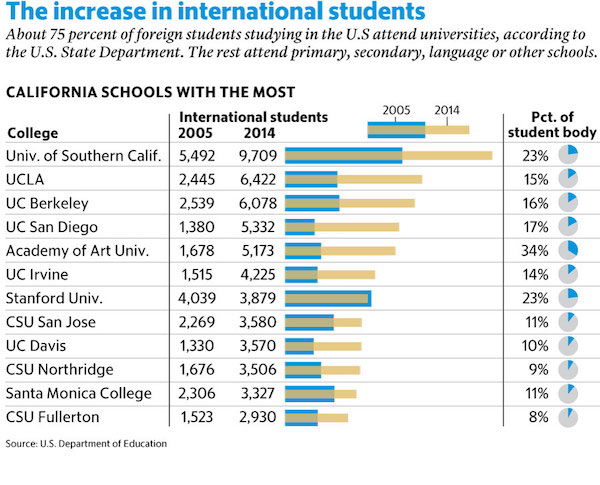 The trend has come with some controversy. The California state auditor recently issued a report saying the University of California has disadvantaged resident students because of an increased emphasis on recruiting applicants from out of state and overseas. The UC system took in $727 million in nonresident fees in 2014-15, including foreign and out-of-state students, up from $227 million in 2005-06. UC officials say the extra money allows them to underwrite slots for California students following years of budget cuts.