California continues to stretch the imaginations of non-liberals. One inconceivable policy is Governor Brown’s scheme by which thousands of presumably dangerous prisoners originally sentenced by juries to life sentences in the slammer are being set free.

A Friday radio segment on the California Report was downright cheery about cons being released into local communities. The title gave a hint of the reason for the upbeat account: New Classes Aim to Help ‘Lifer’ Inmates After Parole. In other words, don’t be scared, little citizens — the murderers and rapists have been taught techniques in anger management.

Below, inmates teach a class as a part of the Long-Term Offender Pilot Program at Solano State Prison. 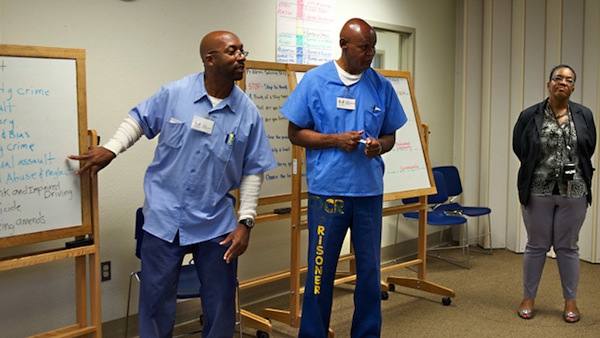 In 1994, 72 percent of California voters approved a broad three-strikes initiative to lock up habitual criminals for long prison terms. The voters think bad guys belong in prison to protect public safety, but liberal politicians think they know better than the citizens.

A profound change is underway in California’s criminal justice system.

Inmates serving life sentences with the possibility of parole are being released in record numbers. Since 2009, nearly 2,300 lifers have been paroled. That’s more than three times the number paroled in the previous 17 years combined.

Gov. Jerry Brown’s office insists it has nothing to do with the state’s prison overcrowding issue. Instead, he says, it’s being driven by recent court rulings that make it harder to deny parole if inmates are no longer considered a risk to public safety.

Now, for the first time, the California Department of Corrections and Rehabilitation (CDCR) is offering classes aimed directly at lifers.

On a recent weekday morning at Solano State Prison in Vacaville, inmates lined up to receive certificates. They had just completed classes that help them understand how they ended up here. The special guest is not a typical graduation speaker. Instead, they hear from Teresa Courtemanche. Six years ago, her son, Matt, who was on the Fairfield City Council, was shot and killed. He was 22 — a victim of mistaken identity. She recalls that night when her home phone rang.

“It was my friend Terri and she said, ‘I think Matt got shot,’ ” Courtemanche remembers. ” ‘What?’ ‘I think he got shot.’ I said, ‘OK, let me go. Let me call his phone.’ And I kept calling his phone and he didn’t answer.”

She goes on to describe through tears how the murder tore through her family — and still does. The audience, 40 or so lifers, sits quietly, many of them nodding slowly as she speaks. It’s one of the ways inmates hear about the impact that crime has on their victims and their families. Afterward, one of the inmates, James Ward, speaks passionately about the unfairness of violent crime.

“When I hear us complaining about how unfair we are treated — you want to see how unfairness is?” Ward says, pounding the podium for emphasis. “Look at herexperience. When we talk about, ‘Oh, the police didn’t let me out on the yard or came to search my house.’ How messed up that is. That is not unfair!”

Ward has spent half his life in prison after stabbing his ex-girlfriend to death over 30 years ago. After being turned down for parole five times, he was finally found suitable earlier this year. Standing in a prison courtyard, Ward says unless that his parole is reversed by the governor, he’ll leave Solano Prison Nov. 5.

“I have mixed feelings about it, actually,” he confides. “There’s the elation of being found suitable but then the sobering realization of what this has cost — in my girlfriend’s life and her relatives’ lives and my family’s lives. So, the impact is widespread, so I can’t be too celebratory.”

A couple years ago, Ward was trained to be a drug and alcohol counselor at Solano, as well as a mentor for other inmates.

“Doing this work is part of that making amends in a kind of indirect way to my victims,” Ward says. “But there’s more that I think I could do out of the confines of this limiting environment.”

Programs like these are part of a different approach that Gov. Brown has brought to criminal justice. For the first time in decades, inmate rehabilitation is a funding priority. The inmates learn things like anger management, what leads to criminal thinking, the impact crime has on victims and how to reconcile with their own family members if they’re released.

Rodger Meier, deputy director for rehabilitation with CDCR, says the goal is “to try to make sure that they are suitable for parole, that they don’t impact public safety, and they can successfully go out into society and lead a productive life.”

Nearly half of Solano’s 3,300 inmates are lifers, and many will eventually be paroled. And the hope is that programs like these will help them make better decisions than they did before they were sent here.

“It’s about responsibility and accountability,” says Florez-DeLyon. “And in order for them to internalize and make changes in their lives, they need to understand the impact that they’ve caused as a result of committing a very serious crime that bought them to prison, as well as the impact it had to themselves, to the community and to their families.”

I point out that not all crime victims want to see these inmates released.

“They may be forgiving, they may be very angry and they want to hold onto that anger and that’s OK,” she says. “It’s a personal experience that we cannot dictate for victims.”

Talking with these lifers can scramble your stereotypes — the images you have of a brutal murderer. Like Jose Hernandez. Twenty-one years ago, he went to his ex-girlfriend’s home south of San Francisco and strangled her to death with a television cable. He then wrote a suicide note to make it look like she killed herself. He was convicted of second-degree murder.

Today Hernandez leads classes at Solano, helping fellow inmates understand their drug and alcohol addictions. He is thoughtful, articulate and seems genuinely, deeply sorry for what he did — with insight into why he turned so brutally violent.

“For me it was when I was abandoned by my mom about 5 years old and left in the hands of an abuser,” Hernandez says. “I was hurt, I felt worthless and rejected. But that’s where the cycle started.”

Last year the Parole Board found Hernandez suitable for release. But Brown reversed it, one of 100 parole recommendations he blocked in 2013, saying he worried Hernandez was still a risk to public safety.

A Stanford University study found that less than 1 percent of paroled lifers commit another serious felony. Still, some critics wonder whether all these programs inside prison just teach lifers what to do and say in order to win their release. One crime victim who feels they’re essentially being coached on what to tell the parole board is Brigit Fitting Nevin.

In 1990, when she was 12, her father, Timothy Fitting, was killed by an employee who struck him in the head with a wrench two dozen times. His murderer has been in prison for 24 years. She says the thought of her father’s killer getting out frightens her.

“There was always this comfort that I had,” Nevin says, fighting back tears. “You know as a child, knowing that even this bad thing occurred, that this person was in jail and that you know I was protected from that and others were protected from that. With them suggesting that he is suitable for parole, that’s been taken away from me.”

In June her father’s killer was found suitable for parole. Nevin will urge the governor to block it.

David Hillary appreciates his freedom every day. After serving 18 years in prison for second-degree murder, Hillary was released two years ago. Today he counsels other former lifers.

With some 26,000 lifers still in prison, the state plans to expand its programs behind bars to help more of them become eligible for parole.