Monday’s front-pager for the Los Angeles Times is a reminder that refugees are just another variety of cheap-labor immigrants. 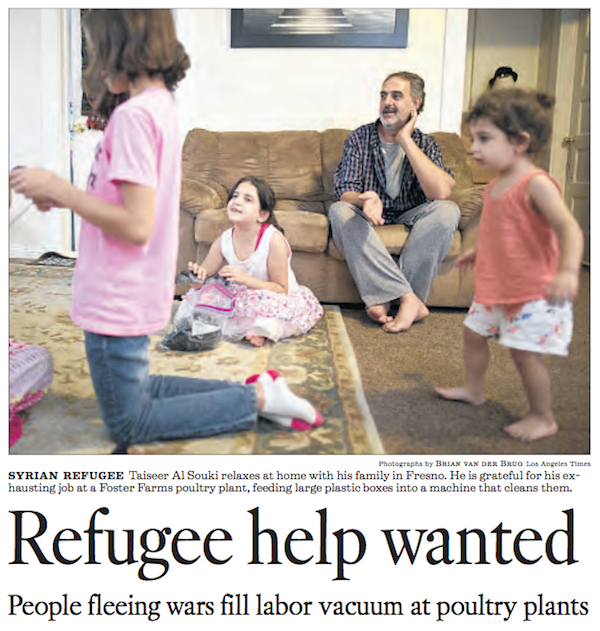 Meatpacking plants used to be a big magnet for illegal alien labor which was convenient for the industry, and the business recruited openly in Mexico. But in 2006, the government raided six Swift plants and carted off around 1300 unlawful workers, so management looked for a different source of cheap labor instead of offering better wages to attract citizens. Refugees were one answer.

But there are caveats. The industry is very interested in automation technology that will end the struggles of labor acquisition. As a result, many of the unskilled refugees are likely to be unemployed in a few years, requiring even more taxpayer assistance.

Below, a diagram of a robotic chicken butcher shows the sort of technology the meatpacking industry wants to adapt. 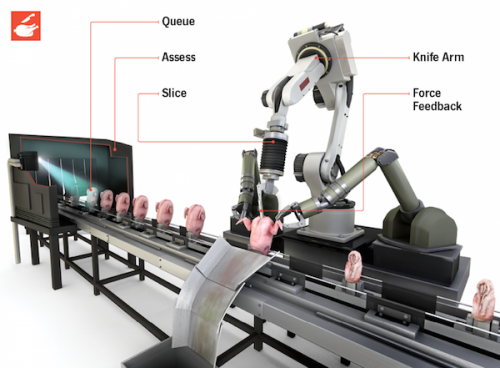 Also, the story notes that the refugees are from Muslim nations, and while Taiseer and the others profiled sound like upstanding fellows, the second generation is where the trouble often starts among Muslim immigrants. Second gens may have identity problems, feeling they are neither entirely American nor the parents’ tribe either. As a consequence, the strong message of jihad and sharia can sound like the answer to a young person’s confusion.

The most prudent policy would be to admit NO Muslims as immigrants at all. Public safety should come first.

Taiseer Al Souki spends most days on his feet at a Foster Farms poultry plant, hefting table-sized plastic brown boxes and feeding them into a machine that cleans them.

He plugs his ears to soften the deafening clang of heavy machinery as he cycles through the same motion for hours on end.

At night, after slumping to sleep in exhaustion, the 44-year-old Syrian refugee dreams that he’s at the plant, still hoisting box after box filled with chicken destined for dinner tables across America.

Al Souki does not complain. He fled war-torn Syria and worked backbreaking 12-hour shifts in his home country and Jordan before making his way to the United States. He is grateful for the $10.50 an hour he collects at the poultry plant.

The meatpacking industry has become so reliant on refugees that the North American Meat Institute, an industry lobby group, released a statement stating their concerns after President Trump issued an executive action restricting citizens of seven predominantly Muslim countries and all refugees from entry into the United States.