Friday’s front page from the San Jose Mercury News revealed that the cost to repair California’s Oroville Dam would double to $500 million. The dam was close to failure last February as torrential rains erased the state’s five-year drought, and at least 188,000 people were evacuated from threatened counties. The dam and spillway survived, barely, but now the repairs must be completed before the next winter rainy season. 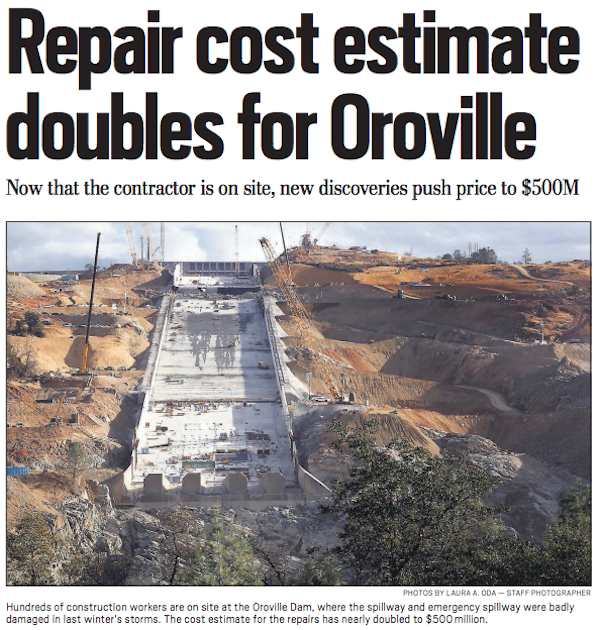 The dam’s safety is a huge concern for the thousands of residents in the area, but the whole situation offers a view into how poorly California is run by all-Democrat Sacramento.

Democrats aren’t much interested in the repair and general upkeep of infrastructure because politicians can’t show up for a non-existent ribbon-cutting ceremony as happens with new construction. Nope, maintenance just isn’t newsworthy. In fact, California is the Worst State in Nation for Infrastructure Spending according to continuing studies. Every four years, the American Society of Civil Engineers (ASCE) compiles an assessment of the nation as a whole and of the states in 16 major infrastructure categories, presented in its Infrastructure Report Card. The California page includes some interesting details:

California is a wealthy state with bad priorities as well as having millions of poor people, many of whom are imported — 27 percent in fact, as of 2015 according to PPIC. The same paper reported, “In 2015, 34% of California’s immigrants age 25 and older had not completed high school, compared with 8% of US-born California residents.” Naturally, the idiocy of allowing huge numbers of poor unskilled persons of various legalities into a modern society has a cumulative affect on spending: the Center for Immigration Studies reported in 2015 that 55 percent of foreigner households in the state use welfare, compared with 30 percent of American families. But immigrants are grateful Democrat voters, and California must have a surplus of them to maintain power.

And the dollar costs of illegal immigrants are indeed substantial to taxpayers. A recent study from the Federation for American Immigration Reform (FAIR) estimated that the annual expenditure of California’s state and local tax dollars on services for unlawful foreigners is $25.3 billion.

So the disrepair of the Oroville Dam did not come from nowhere: it is the result of Democrat-run California’s spending choices to keep its foreign base welfared up while the vital infrastructure has been allowed to go to ruin.

Kiewit, the Nebraska-based construction firm that has the main contract to rebuild the main spillway and emergency spillway at Oroville, the nation’s tallest dam, estimated in its winning bid in April that the work would cost at least $275 million. But the price tag has now grown to at least $500 million, said Erin Mellon, a spokeswoman for the Department of Water Resources.

“When Kiewit put in the bid, only 30 percent of the project had been designed,” she said. “When you get on the construction site, there’s a lot more information that you glean.”

Jeff Petersen, project manager for Kiewit, said that once construction workers got on the site they discovered they had to dig much deeper to get down to bedrock than they had expected. That meant they are having to pour almost twice as much concrete this year — 870,000 cubic yards — as the company and the Department of Water Resources had planned.

Petersen said such discoveries are not uncommon on major dam projects.

“It’s like when you work on an old house or an old car,” he said.

Petersen said the project remains on schedule to hit a Nov. 1 deadline for repairs that will allow the main spillway to carry up to 100,000 cubic feet per second this winter. Seven hundred workers are rushing around the clock.

“I don’t want to jinx it,” he told reporters on a tour of the construction site, “but we’re five days ahead of schedule.”

On Thursday, the scene inside the main spillway — which is 3,000 feet long and 180 feet wide, twice the width of the Golden Gate Bridge — was abuzz.

Huge cranes swung steel beams and other materials overhead as fleets of giant dump trucks poured layer after layer of concrete, and bulldozers and mechanical rollers compacted it. Diesel engines roared from all directions, and the constant beeping of heavy equipment filled the air.