California’s worsening drought is looking dire, but there’s a limit to what the people should be forced to endure. Freedom of religion is fine, a protected right, but when Muslims chant “Allah Akbar” over a California water source (as can be heard on a news video), that’s over the line.

“Allah Akbar” is a war cry, what jihadists routinely yell as they murder infidels for Islam, so the connotation is not exactly friendly.

Plus, going to a lake to pray for rain smells like a stunt. California needs substantial rainfall over the whole state to refill the reservoirs, not just some precipitation over lakes. Unsurprisingly, the terror-supporting Council on American Islamic Relations (CAIR) announced on its website that prayers for rain would be held.

Below, a group of Muslims trooped to Folsom Lake to pray for rain. 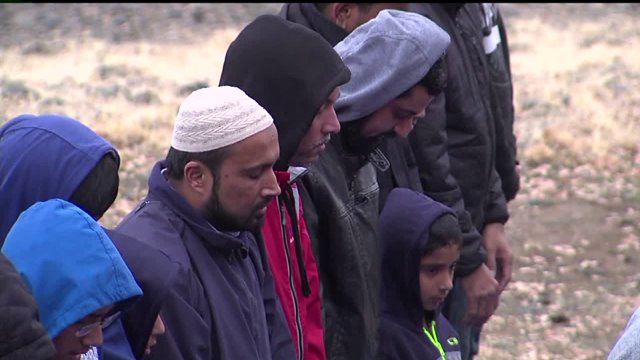 Another interpretation would be that the pray-in was a prettied-up version of marking territory, which Muslims do quite often.

Amid record dry conditions around California, more than 100 people with the Muslim Community of Folsom prayed for rain during an event at Folsom Lake Saturday.

The event came as officials across California have been expressing concern about drought-like conditions.

For example, downtown Los Angeles had the driest year since 1877, when official measurements began.

Only 3.6 inches of rain has fallen at the National Weather Service station at USC since Jan. 1, about half an inch less than was recorded in 1953 and 1947, which until now had tied for the lowest rainfall.

The Northern California event came at Folsom Lake, which has been receding to new record levels.

“Some people just look at it as, ‘Oh you’re praying for rain,’ but it’s so important,” Basma Marmosh told Fox 40 News.

Statewide forecasts developed for the California Department of Water Resources suggest that dry conditions are likely to persist this winter.