The illegal alien sob story genre is indeed undergoing a renaissance as a result of the Trump administration’s tough enforcement. These sniffler sagas are simple to write and are easily embellished with cutesy photos of kids and puppies to make the lawbreaker appear emotionally sympathetic. (Both dogs and children are shown in the video about the current case.)

A recent example was teased on the front page of Tuesday’s Sacramento Bee. Interestingly, the illegal was sympathetically called a “Father” rather than the neutral noun “Man” which is often the descriptor for an illegal alien who may be a violent criminal. 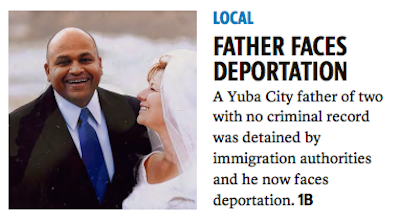 The character in question, Yuba City resident Baljit Singh, entered illegally via the Mexican border in 2005. A citizen of India, he has been angling for forgiveness by claiming political asylum, which is a tough sell since his homeland is often billed as the “world’s largest democracy” — with over one billion served. The court system agreed that he had no claim of asylum.

Singh is not being sent back to a genuine hellhole like Iran or Syria but to a democratic Asian nation. On a planet of more than seven billion souls, people need to fix their own countries if there is a problem because they cannot all relocate to the Anglosphere or Europe.

The alien works as a gas station manager, a position that will open up for an American (hopefully!) after the deportation. The newspaper says he has “no criminal record” because job theft is unfortunately not recognized as a crime.

Is it me, or is Baljit’s English hard to understand in the video following? But kids and dogs are present, and that’s the important thing.

I agree that violent criminal aliens should get top priority for deportation, but ALL illegals should be sent home. When Singh’s story is written up at home, Indians considering illegal entry to the United States will understand that there’s a new sheriff in town, and they will not be allowed to stay.

A day after being released by federal immigration authorities on Tuesday, Yuba City resident Baljit Singh ran his dogs along the river, played with his sons and started thinking about what may be his last three months in America.

Singh, 39, was detained by Immigration and Customs Enforcement, or ICE, in Sacramento during a required check-in with federal authorities on Aug. 1. After being held for a week at Rio Cosumnes Correctional Center near Elk Grove, he was granted a three-month reprieve to get his affairs in order and make arrangements to leave the country.

Singh, from India, is undocumented and has been fighting for legal status for more than 12 years after crossing the border illegally from Mexico in 2005. His immigration case went to the 9th Circuit Court of Appeals, where Singh said he ultimately lost a bid for political asylum in 2016. He has a final order for deportation issued against him.

ICE spokeswoman Lori Haley said Singh was granted 90 days “to afford him time to get his personal affairs in order and make preparations for his departure.”

Haley said there have been 5,208 immigration arrests in an area that stretches from Bakersfield to the Oregon border, from Oct. 1, 2016 through June 30, 2017.

Nationally, ICE agents arrested 41,898 individuals between Jan. 22 and April 29 of this year, a 38 percent jump over the same period in 2016, the agency reported. About 25 percent of those apprehended had no criminal convictions, an increase of 150 percent.