It’s sad to see California Republicans running from an issue that could still be a winner for them, even with increasingly Mexicanized demographics.

The state GOP met last weekend and the suits apparently tried to downplay the issue of immigration enforcement because they want to “reach out” to diverse tribes.

Mario Rodriguez, former vice chairman of the party, remarked in the California Report radio piece below, “All the inroads we’re making, all of a sudden a certain wing of the party rears its ugly head and starts saying things that turns off the latino voters and we have to change that.”

Since when does insisting upon fair law enforcement make a concerned citizen “ugly”?

And what’s wrong with appealing to the basic American value of equality under the law for all? That issue should usefully help sort out the hostile raza invaders from legal hispanics who want to join the American community.

The R’s fearfulness around the issue of enforcing immigration laws and American sovereignty only encourages the open-borders extremists to pile on what they see as a weakness.

The radio report goes on to mention the California DREAM Act signed into law by Gov Jerry Brown, like that’s the way the state is going. In fact, a USC/LA Times poll from last November found that a strong majority disapproved of the law (chart below), and that was before a report was released showing the cost would be $25 million more than Jerry Brown’s rosy estimates. 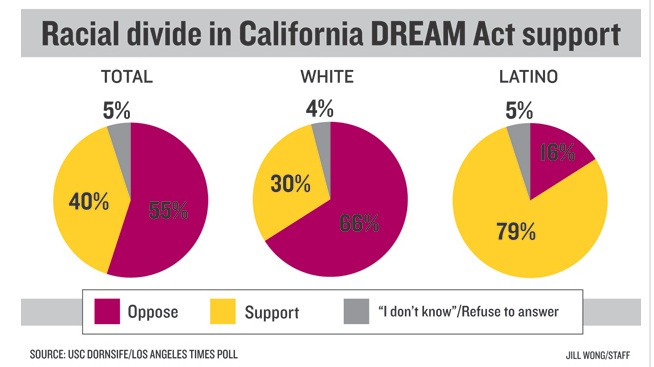 Gov Brown brazenly bragged on Meet the Press Sunday about signing the DREAM Act, without mentioning its unpopularity among many California voters because it is unfair and other state expenditures (like parks!) are being cut. Illegal alien moochers are its main supporters, not mainstream Californians.

Issues like the disliked DREAM Act are instances where the Republican Party could appeal to its members and beyond, but instead the GOP shrinks back in fear. It is missing winning issues connected with immigration because of believing diversity propaganda and plain spinelessness.