Water is an important topic here in the western half of the United States, because we don’t have enough of it. In California, we are in the third year of a severe drought, and nature is not supplying much water in this winter’s rainy season.

Below, Lake Tahoe, located on the border of California and Nevada, is one foot below normal, which opens up new territory for users of metal detectors. 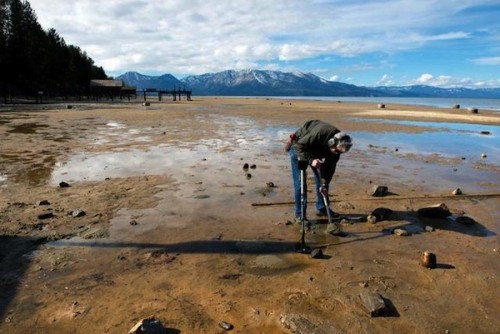 Interestingly, the west experienced a series of Medieval mega-droughts from 900 to 1400, which is recent climatically speaking. Still, there weren’t human-created industrial carbons being spewed into the atmosphere at that time, yet the climate was changing.

Usually, scribblers don’t bring up the topic of rapid population growth (much less its cause) but sometimes even the overwhelming growth of demand coupled with diminished supply does not deter the more reckless. For example, last October the LA Times assured us that a seven-decade Mega-drought won’t be that bad. Imagine my relief.

Today’s example of the Brave New Drought comes from the Sacramento Bee, which is semi-upbeat about the potential of water conservation measures to cope with more population growth, even though the numbers don’t work. The upshot is that Californians will be using less water so more immigrants can “move” here and take American jobs, but it still won’t be enough.

Plus, percentages of conservation goals achieved won’t matter when the reservoirs run dry.

California water agencies are on track to satisfy a state mandate to reduce water consumption 20 percent by 2020. But according to their own projections, that savings won’t be enough to keep up with population growth just a decade later.

A 2009 state law requires urban water agencies to reduce per-capita water consumption 20 percent by 2020, compared with use at the start of the century. Most agencies are on track to reach that goal, and have made even more progress thanks to emergency cuts over the past year triggered by the ongoing drought.

However, by 2030, the data show, these savings will be more than erased by anticipated population growth. According to projections by the water agencies themselves, their total water deliveries will increase 16 percent by 2030 compared to their estimates for 2015.

California’s population, already larger than all other Western states combined, is expected to grow 14 percent during that same period, reaching an estimated 44 million people by 2030, according to the state Department of Finance.

If those projections hold, the result would be an additional 1 million acre-feet of water demand statewide – about equal to the capacity of Folsom Reservoir – by 2030. This would occur even as people use less water to meet the 20 percent reduction goal.

“We are having a hard time managing the scarce water we have now,” said Newsha Ajami, director of urban water policy at Water in the West, a research group at Stanford University. “The problem is, every time the drought ends we snap out of it, and we don’t actually start planning for the next drought. We need to help people understand what this means for future generations.”

In January 2014, Gov. Jerry Brown signed an emergency drought proclamation calling on all Californians to cut their water use 20 percent compared with 2013 in response to the worsening drought. This temporary measure is different from the 2020 goal, which is meant to be a permanent reduction in water use compared to what Californians were consuming in a base year, which for most water agencies is 1999.

To comply with the 2020 mandate, urban water agencies are required every five years to submit water management plans to the state Department of Water Resources. Among other things, these plans estimate each agency’s future water demand out to 2035. The demand estimates are based on projected population growth, as well as anticipated development patterns and water consumption levels unique to each agency’s local service area.

The Sacramento Bee reviewed plans submitted by more than 370 agencies in 2011 and compiled a database on the water demand projections. The results show that, collectively, urban water agencies expect demand to grow 16 percent by 2030 and continue growing beyond that. This would eclipse the 2020 goal by nearly 1 million acre-feet, potentially adding significant new water demand in the next drought.

“Clearly, we’re going to have to do more,” said Tracy Quinn, a policy analyst at the Natural Resources Defense Council who specializes in California water policy. “The key to this is our water sources don’t increase as population grows. If population is to grow, we need to figure out a way to do it with that same amount of water.”

The water agency projections come with uncertainty, largely because they were prepared as the recession dramatically reduced growth in the state. The population growth water agencies anticipated in the 2011 reports may have been too great, along with the resulting projections of increased water demand. The next round of reporting, due in 2016, may produce different results.

On the other hand, slow growth may be one reason water agencies are making good progress toward meeting the 2020 conservation target. Almost all of them easily met the interim target of a 10 percent reduction by 2015. A return to faster growth could reduce that progress.

“There are a lot of people who think the economy has a big impact on water use,” said Peter Brostrom, chief of DWR’s water use efficiency branch. “If there’s a real big upturn in the economy, that could potentially increase water use.”

Water districts forecast the total number of water customers in the state to increase about 20 percent from 2015 to 2030, according to the surveys. Many of the largest increases are expected in the state’s hottest climates, areas where water demand is generally greater.

Several Central Valley water districts also predict significant growth. The cities of Tulare, Madera and Merced, along with the Sacramento County Water Agency and the El Dorado Irrigation District, each anticipate water consumption to grow by at least 40 percent between 2015 and 2030.

“We fully anticipate there will be further targets after 2020,” Brostrom said. “The goal is to hold the total volume of urban water use to be the equivalent of roughly what it was in 2000.”

Some water agency leaders contacted by The Bee acknowledged they don’t know very much about their own demand projections.

John Tillotson, director of public works at the Olivehurst Public Utility District in Yuba County, said a consultant was hired to prepare the district’s urban water management plan. He couldn’t recall what the demand projections were when asked about it recently.

“I don’t have any information as far as the growth that we predicted,” Tillotson said. “If it ever happens – and that’s a big ‘if’ – it would take quite a long time.”

Tillotson’s district predicted one of the highest growth rates in the state: a 172 percent increase in water demand from 2015 to 2030. This was based on the planned construction of 8,000 new homes at Plumas Lake, a massive subdivision north of Sacramento that will be entirely served by groundwater wells managed by the district. Construction came to a standstill during the recession and only recently started back up.

“It’s anybody’s guess as to when those homes will be here, if ever,” Tillotson said. “It might be 10 years, it might be 20, it might be never. We have capacity in that area right now, and we have a planning document that will support the growth.”

Gregory Weber, executive director of the California Urban Water Conservation Council, said water agencies throughout the state understand they will have to work harder on conservation. If anything, the current drought has made that clearer.

Conservation is often the first option water agencies choose to accommodate growth, rather than seeking out new water supplies. Conservation and other options – such as recycling stormwater and wastewater – are almost always cheaper than buying water, building dams or drilling wells.

“There’s general recognition on the part of members throughout the state that, if you’ve got restrictions on supply, the only way you can pay for growth is by investments in efficiency, conservation or water recycling,” said Weber, whose group represents hundreds of urban water suppliers. “I’ve never heard anybody say, ‘We’ll hit 20 percent by 2020, and then we’re done.’ ”

Simply switching commercial and residential customers to the latest high-efficiency appliances and plumbing fixtures could save 5 million acre-feet per year, according to the report. That’s enough to serve more than 10 million households. Stopping leaks, adding more water recycling and stormwater capture, and reducing water use for landscaping could boost total savings to 13 million acre-feet.

“We do have enough water available to meet the demands of a growing population,” Quinn said. “We just have to be more innovative in the ways that we’re using the water that we have.”