California: End of Impounds for Unlicensed Drivers Looms over 2012

We little citizens are supposed to celebrate New Years Day, but in backwards Mexifornia, thats the date when the bad new laws go into effect. So the holiday also has a strong batten-down-the-hatches aspect.

One of the worst concoctions from Sacramento this year is the law that prohibits the impounding of cars driven by unlicensed drivers. It was enacted in October to make life easier for illegal aliens.

Unlicensed drivers are involved in one in five fatal crashes according to a 2008 study from the AAA Foundation for Traffic Safety.

It used to be the law that unlicensed drivers snagged in checkpoints or during traffic stops would lose their vehicles to the impound yard and have to pay a big fine to bail them out. But that was deemed too troublesome for illegal aliens, so the only punishment left to dissuade unlicensed driving was scrapped. 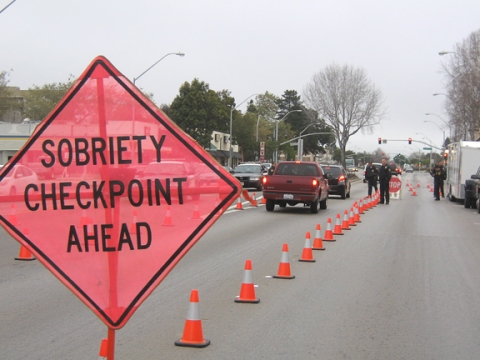 Pandering to illegals makes the roadways more dangerous for the public, but the Mexican tail wags the Democrat dog in the California capital.

In Los Angeles, the policy is already in place, and police are arguing that the political decision is endangering public safety (Impound policy change for unlicensed motorists leads to feud, Daily News, Dec 23). A police union cited the recent death of a pedestrian (Missouri resident Patricia Ellen Riedy) in Panorama City caused by an unlicensed driver:

This could have been avoided if the driver had taken the bus, said Officer Kristi Sandoval, who serves on the Police Protective League board. She could have saved a life if she were willing to be inconvenienced.

Another cop view is expressed in a comment from curahee on SFGate.com about the article linked below:

As a police officer I can tell you that when we pull over an unlicensed driver whom is in this country illegally with NO license or insurance (so if they get into a collision you are totally financially responsible for damage / injury even if it is through no fault of your own), also these drivers are also much more likely to leave the seen of an accident as well regardless if you are injured / dying. But back to my original point, I have to give the unlicensed driver twenty minutes to call a friend to come get his or her car (this is the law of our state). Now if you are an American who had a license who somehow got it revoked I (by statute of state law) immediately no questions asked have to tow your car. I have not an ounce of leeway in this matter. How is that fair and equal treatment under the law?

Escondido, Calif. (AP) Delfino Aldama was fixing a customers brakes this month when his smartphone chimed with a text message that tipped him to a police checkpoint more than an hour before officers began stopping motorists. The self-employed auto mechanic frantically called friends with the location and drove an alternate route home.

The Mexico native had reason to be alarmed: He does not have a drivers license because he is in the United States illegally, and it would cost about $1,400 to get his Nissan Frontier pickup back from the towing company. He has breathed a little easier since he began getting blast text messages two years ago from activists who scour streets to find checkpoints as they are being set up.

The cat-and-mouse game ends Jan. 1 when a new law takes effect in California to prohibit police from impounding cars at sobriety checkpoints if a motorists only offense is being an unlicensed driver. Thousands of cars are towed each year in the state under those circumstances, hitting pocketbooks of illegal immigrants especially hard.

When Aldamas 1992 Honda Civic was towed from a checkpoint years ago, he quit his job frying chickens at a fast-food restaurant because he had no way to make the 40-mile round trip to work. He abandoned the car rather than pay about $1,200 in fees.

A car is a necessity, its not a luxury, said the 35-year-old Aldama, who lives in Escondido with his wife, who is a legal resident, and their 5-year-old son, a U.S. citizen.

Assemblyman Gil Cedillo, a Los Angeles Democrat who tried unsuccessfully to restore driver licenses to illegal immigrants after California revoked the privilege in 1993, said he introduced the bill to ban towing after learning the notoriously corrupt city of Bell raked in big fees from unlicensed drivers at checkpoints.

A sharp increase in federally funded sobriety checkpoints in California has fueled controversy. The National Highway Traffic Safety Administration paid for 2,553 checkpoints last year, which authorities say helps explain why deaths caused by drunken drivers dropped to an all-time low in the state.

Police also ask for drivers licenses at the sobriety checkpoints. Supporters of the vehicle impounds say unlicensed drivers are also a roadside hazard and that the new law is misguided.

Its a terrible law, really disappointing, said Jim Maher, who sharply expanded checkpoints in Escondido after being named police chief in 2006.

All but three U.S. states — New Mexico, Utah and Washington — deny drivers licenses to illegal immigrants but controversy over checkpoints has been strongest in California. Cedillo believes thats because a 1995 state law has allowed police to impound vehicles from unlicensed drivers for 30 days, resulting in fees that can easily top $1,000.

Towing practices vary widely across the state. San Francisco allows 20 minutes to find a licensed driver to claim a vehicle at a checkpoint. The Los Angeles Police Department eased rules on 30-day impounds in March.

Checkpoints have divided Escondido, a city of 144,000 people near San Diego whose Latino population has surged in the last 30 years. Latinos moved into aging neighborhoods near downtown as newer subdivisions gradually spread to avocado orchards, vineyards and citrus groves. Nearly half the signs at a big strip mall near City Hall are in Spanish.

Like Hazleton, Pa., and Farmers Branch, Texas, authorities in Escondido have tackled illegal immigration on their own.

In 2006, the City Council voted to require landlords to check tenants immigration status but a federal judge blocked the ordinance and it never took effect. Last year, Escondido police forged an unusually close alliance with U.S. Immigration and Customs Enforcement, which has four agents at police headquarters to check the immigration status of people who are questioned at checkpoints or elsewhere.

Its a never-ending battle, said Concilman Ed Gallo, a New Jersey transplant who blames illegal immigration for overcrowded homes and schools. We didnt pay attention to it for 25 years and look what happened. It was a long, slow process.

Several residents and a labor union sued Escondido in state court this month to create City Council districts, a bid to increase Latino representation. The lawsuit says the council has pursued aggressive anti-immigrant policies that have inflamed racial tensions.

Maher (pronounced mah-HAR) said the partnership with ICE is aimed only at rooting out illegal immigrants who commit crimes after arriving in the United States, including being previously deported. Those whose only offense is being in the country illegally wont be bothered by his officers, nor will any crime victims or witnesses.

Police say they have turned over 670 people to ICE for immigration proceedings since the joint effort began in May 2010. Their most common offenses were previous convictions for driving under the influence and drugs, with lower numbers for theft and assault.

We certainly have enough of our own criminals. We dont need someone elses here, Maher said.

Escondido has impounded more than 3,200 vehicles since 2006, mostly at the federally funded sobriety checkpoints. The city had towed about 1,000 at driver-license-only checkpoints until the American Civil Liberties Union and El Grupo, a Latino advocacy group, threatened a lawsuit in 2009, contending they violated the state vehicle code.

Maher insists he is targeting unlicensed drivers, not illegal immigrants or Latinos.

Six towing companies each pay the city $75,000 a year to take turns at checkpoints, keeping impound fees for themselves. About one-third of the cars towed are believed to be abandoned, allowing the towing companies to auction them.

It was kind of like letting them steal cars, said Olga Diaz, the only Hispanic on the City Council.

Websites that have sprung up in the last two years quickly alert motorists to checkpoints through social media networks and smartphones, severely undermining their effectiveness. A few years ago, Escondido police impounded 50 or 60 vehicles a night. Now they typically get about 20.

One of the final checkpoints before the new law takes effect was one of the slowest in memory for many of the 15 officers who stood under bright lights and encountered a December chill. Activists waved signs several blocks away, giving motorist an opportunity to turn away. Police impounded six vehicles — three for driving without a license and three for driving under the influence.

Aldama, who paid a smuggler $1,300 to lead him through the mountains east of San Diego on a weeklong trek 13 years ago, was able to reach all his friends before the checkpoint began. One he didnt call had his 1997 Ford Explorer towed at an Escondido checkpoint a few weeks earlier. The unemployed construction worker surrendered the SUV to the towing company because he couldnt afford the fees.