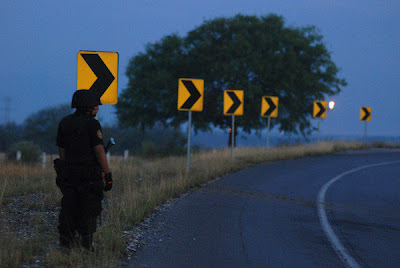 Policemen stand guard near the crime scene in the municipality of Cadereyta (May 13, 2012)

The original version of this story that my reader-researcher RC sent me, and for which I thank him, said “37” bodies. A few hours later I lost the story, and had to backspace to it. The body count had by then gone up to 49. If I return to it now, will the body count have risen yet again?

Three or four years ago, when I first began following the Mexican drug wars, the cartels were content to slaughter a “mere” seven or eight people at a time. But the Treason Lobby expects us to believe that the living Mexicans are staying put.

MEXICO CITY (Reuters) - Authorities found the dismembered bodies of 37 people stuffed into bags and dumped on a highway near the northern industrial city of Monterrey in what appeared to be part of a string of brutal drug gang killings, local media reported.

The bodies were found in the early hours of Sunday on a highway, sparking a large deployment of local, state and military officials to the scene, daily Excelsior reported on its website. Other national newspapers also reported 37 dead.

The report follows a string of atrocities, including 18 people who were found decapitated and dismembered near Mexico's second-largest city, Guadalajara, on Wednesday.

Authorities in Nuevo Leon, the home state of Monterrey, could not immediately be reached for comment.

[Here’s yet a newer version.]

CADEREYTA JIMENEZ, Mexico (Reuters) - Suspected drug cartel killers in Mexico dumped 49 headless bodies on a highway near the northern city of Monterrey, a sickening atrocity that prompted the government to condemn the "inhuman" violence plaguing the country.

The corpses of 43 men and six women, whose hands and feet had also been cut off, were found in a pile on a highway in the municipality of Cadereyta Jimenez early on Sunday, officials from the state of Nuevo Leon said.

The Nuevo Leon government said the notorious Zetas drug gang had claimed responsibility for the bloodbath, one of the worst to hit Mexico during its struggle against the powerful cartels.

The massacre follows several other mass slayings in Mexico. Many have occurred in the north, where the Zetas have waged a war against rival groups for control of smuggling routes into the United States, the biggest market for illicit drugs.

The Mexican government said in a statement the evidence suggested turf wars between the Zetas and the Sinaloa cartel of Joaquin "Shorty" Guzman were behind the surge in bloodshed.

Condemning the "inhuman episodes of irrational violence" the warring gangs had caused, the government pledged to uphold justice in Mexico with "all of its force and might."

The Zetas gang was founded by deserters from the Mexican army who became enforcers for the Gulf cartel, which once dominated the drug trade in northeastern Mexico. Leaders of the Zetas later split from their employers and the two gangs have since fought for control of trafficking routes.

The Zetas have also been at war with the Sinaloa cartel headed by Guzman, the country's most wanted man.

President Felipe Calderon has staked his reputation on bringing Mexico's drug gangs to heel, sending in the army to fight them shortly after taking power in December 2006.

But the violence has spiraled since, and more than 50,000 people have fallen victim to the conflict, eroding support for Calderon's conservative National Action Party (PAN), which looks likely to lose power in presidential elections on July 1.

The commercial hub of Monterrey was long a bastion of the PAN, and the local business community has been "livid" about the violence engulfing the city, said George W. Grayson, a Mexico expert at the College of William and Mary in Virginia.

"This puts the final nail in the coffin of the PAN in the presidential contest," he said after the latest atrocity.

Surveys show voters think that the PRI, which ruled Mexico for 71 years until 2000, is more likely to quell the violence. Its long rule was tainted by corruption and critics have accused the PRI of making deals with cartels to maintain order.

Vazquez Mota took a swipe at the PRI after the headless bodies were discovered, suggesting regions governed by the centrist party - which include Nuevo Leon and nearly two-thirds of Mexico's states - had allowed crime to flourish.

"What happened in Cadereyta must be investigated, but what I think it shows, in a terrible and painful way, is the kind of permissiveness seen in these states towards organized crime," she told Reuters in the eastern port of Veracruz on Sunday.

The headless victims have not been identified.

The bodies showed signs of decay, indicating they may have been dead for days, Nuevo Leon Attorney General Adrian de la Garza said. He noted there had been no mass disappearances reported in the state, so the victims could have died elsewhere.

De la Garza said many of the bodies were tattooed, which could offer a clue to their identities. The dead may have been migrants passing through Mexico to the United States, he added. Migrants have been targeted by criminal gangs in the past.

Violent street gangs in Central America like the Maras have distinctive tattoos, though Nuevo Leon public security spokesman Jorge Domene said the victims did not show these markings.

Domene said some had tattoos of Santa Muerte, or "Holy Death" a female skeletal grim reaper venerated by both gangs and some broader, non-criminal sections of Mexican society.

The corpses were taken to Monterrey and authorities said they would perform DNA tests. Thousands of Mexico's drug war victims have never been identified.

The bloody killings in Nuevo Leon were the worst there since 52 people died in an arson attack on a casino in Monterrey in August. That attack was also blamed on the Zetas.

Monterrey is Mexico's most affluent city and was long seen as a model of economic development in Latin America. But it has been ravaged by the drug war over the last three years.

The horrifying conflict has been marked by an escalation of mass slaughter in recent weeks.

A week earlier, the bodies of nine people were found hanging from a bridge and 14 others found dismembered in the city of Nuevo Laredo, just across the U.S. border from Laredo in Texas.

Security analyst Alberto Islas said much of the recent spike in violence was the result of fighting over cocaine supplies from South America between the Zetas and the Sinaloa cartel.

Increased pressure on Guzman's operations in Colombia this year had prompted the Sinaloa cartel to buy up a bigger share of cocaine from Peru and Ecuador, squeezing the Zetas' supply and sparking tit-for-tat attacks among the gangs, Islas added.

The fact that state and federal authorities had repeatedly failed to capture and prosecute those responsible for the brutality meant the attacks were only getting worse, he said.

"They're fighting across the whole country with complete impunity," he said. "The government has to send out a very clear signal they will stop the violence and find those responsible."

Late last year, several mass killings took place in the eastern state of Veracruz, which has been ravaged by the Zetas.