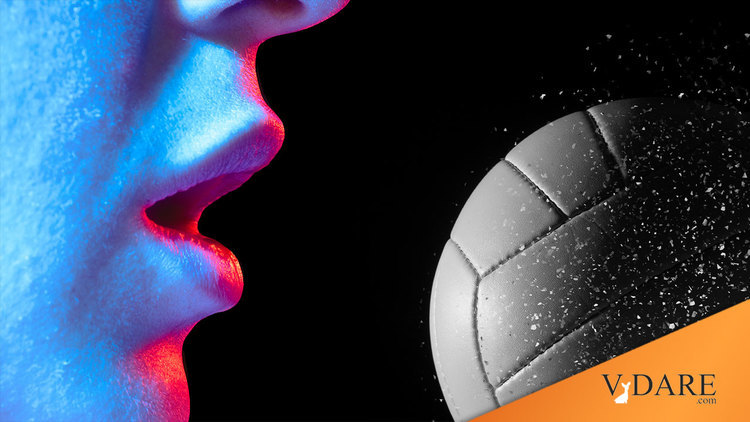 Earlier: National News vs. Local News—Why Are National News Consumers Forced To Hear About An Imaginary Racial Slur At A Volleyball Game?

Brigham Young University has asked people who were at the Aug. 26 game for help finding the person who yelled slurs at a Black player for Duke University.

Brigham Young University said Tuesday that it was still investigating who was responsible for the racist slurs and threats that a Black player for Duke University’s women’s volleyball team said were directed at her at a match on Aug. 26.

After the match, B.Y.U. banned a person who had been sitting in its fan section from all university sporting events. But last week the school told The Salt Lake Tribune and other local media that it had not found evidence that the unidentified spectator was responsible for the shouted slurs.

“The investigation is ongoing,” the university’s associate athletic director, Jon McBride, said Tuesday in an email. “We are investigating fan behavior as well as the B.Y.U. response to the behavior, reviewing video and audio as well as taking firsthand accounts from individuals who were present.”

McBride said that the person who was banned had been pointed out by Duke University, but that B.Y.U. had been “unable to find any evidence of that person using slurs in the match.” The university has not identified the person, but said it was not a student. McBride did not respond to a question asking if the ban had been lifted.

More than 5,500 people were in the stands. The school asked people who were at the game to share videos to help with the investigation, The Tribune reported. …

In other words, don’t lose hope, NYT subscribers! The authorities are still investigating. So something could turn up real soon now.

… The B.Y.U. campus is predominantly white and Mormon.

Less than 1 percent of the student population is Black, and many students of color “feel unsafe and isolated” at the school, according to a February 2021 report by a university committee that studied race on campus.

Can you imagine a more dangerous, a more violent place than the BYU campus in Provo, Utah?

Black Menaces, a group founded by Black students at B.Y.U. that uses social media to discuss racism on college campuses, said they were disturbed by a “lack of action” from people at the game. “Out of the 5,000 people in attendance, no one had the bravery or courage to denounce pure racism,” the group said in a statement.

Occam’s Razor might suggest that if this National News Hate Crime took place in front of 5,000+ people, but nobody else other than the accusers noticed it, well, it probably didn’t happen. But instead, Occam’s Butterknife proves that it must be a vast conspiracy among 5,000 Mormons. And you know what Mormons are like: just think of Mitt Romney and his creepy family:

At least one B.Y.U. competitor was not satisfied with the school’s response.

On Friday, Dawn Staley, the coach of the University of South Carolina’s women’s basketball team, said she was canceling scheduled games against B.Y.U. in the 2022-23 and 2023-24 seasons, including the season opener on Nov. 7, because of the behavior described at the volleyball game with Duke.

Well, there you go. If that’s not proof, I don’t know what is.

More plausible theories have been put forward, such as that

It’s something you may not have noticed. It’s like QAnon. Or mass voter fraud. It’s another conspiracy theory. This one? That Duke volleyball player Rachel Richardson, who said she was called multiple racial slurs while playing in a game at BYU, made the entire thing up.

My email inbox has been overwhelmed with this conspiracy theory. It’s grown across social media. The right wing has spent extensive time promoting it.

As I’ve been explaining for years, we are not only overrun by hate hoaxes, but also by hate hypochondria, and hate hallucinations. From my 2019 Taki’s Magazine column about Jussie Smollett, “Fake Noose”:

But few of these legitimate hate-crime cases get extravagant national media attention because the cops immediately arrest the offenders, and prosecutors see that they are severely punished. There’s no controversy to write about day after day.

In contrast, the stories that receive huge amounts of ink (often by implying that the cops are dragging their feet due to racism) tend to self-destruct. If in 2019 Black Twitter is going nuts over a purported hate crime but the police aren’t rushing to arrest what Tom Wolfe would call a Great White Defendant, the cops usually turn out to have good reasons for their caution.

This doesn’t mean that every hate-crime story that blows up is due to a carefully plotted hate hoax.

Some are actually due to hate hypochondria in which no crime at all happened. For example, after Trump was elected, a Jewish politician announced that anti-Semitic vandals had toppled 42 headstones in Brooklyn. The graveyard manager, however, explained that the culprit was actually gravity: “It definitely was not vandalism…. The older sections, as the stones wear, they do fall over….”

Similarly, at Kansas State, there was much hubbub when a ceremonial Jewish tent was found destroyed. It was eventually discovered that the malefactor was a thunderstorm.

Besides Acts of God, another type of hate hypochondria is the hate hallucination. In 2013, the (very) liberal arts college Oberlin was convulsed by a student’s claim to have spotted a one-man Ku Klux Klan rally on campus. The cops couldn’t locate a Grand Kleagle, but they did find a lady pedestrian who had wrapped herself in a white blanket against the cold.

In a world in which hate hoaxes are vindicated by the prestige press, it’s hardly surprising that young people are prone to hate hypochondria and hate hallucinations.