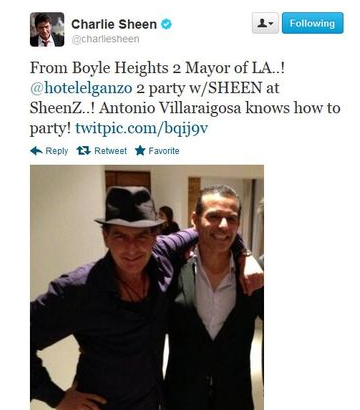 What’s the tried & true fix when an elected official screws up royally in public? Quick, change the subject, particularly to a timely issue, and act like a serious leader!

That urge was apparently the reason for Los Angeles Mayor Antonio Villaraigosa’s recent mini-tour on the subject of comprehensive amnesty, including an interview with Face the Nation on Sunday and a National Press Club speech on Monday. The issue is a natural for a man who was a leader of ultra-radical MEChA organization when he attended UCLA as an affirmative action student. (But affirmative action couldn’t help him pass the California bar exam after at least four tries.)

The sociable mayor was recently nailed for partying hard with Hollywood star and legendary druggie Charlie Sheen. The photo and accompanying social media were not flattering to the mayor, who is already has a reputation as a convivial fellow.

In addition, the mayor’s performance at the Democratic convention last summer was less than stellar. Diversity boosters hoped Villaraigosa’s star position as Chair of the event would relaunch his floundering career, where early expectations were dashed because the poor job he’s done as LA mayor. But he failed to be sufficiently adroit under the unforgiving cameras of the national media at the Convention.

So here we are at another episode of Mayor Villaraigosa’s attempted resurrection, which depends on Americans’ famous short attention span.

The following headline is curiously honest about the self-interest aspect of the mayor’s shenanigans.

WASHINGTON—Los Angeles Mayor Antonio Villaraigosa, who increased his national profile in September when he chaired the Democratic National Convention, is turning his sights to Washington, D.C.

Nearing the end of his final term as mayor of the largest city in the West, Villaraigosa, days before his 60th birthday, is openly talking about a next move—though he won’t say what the move will be.

“With each passing week I take another step toward the transition from ‘Who’s Who’ to ‘Who’s He?’” Villaraigosa joked during a luncheon at the National Press Club on Monday, where he spoke about immigration reform. “The sun may be setting on my administration, but I’m not riding off into the sunset just yet.”

As a charismatic mayor with a growing national presence—and an impressive resume that includes leading the United States Conference of Mayors and working as an adviser and surrogate for President Barack Obama—Villaraigosa has a range of options ahead of him. He has openly expressed interest in becoming the next governor of California and is rumored to be a contender to join Obama’s Cabinet.

When pressed about his future, however, the traditionally eloquent veteran politician melts into a nervous, stuttering mess.

“I expect to be in Washington quite frequently over the next few months,” he said during the luncheon when asked if he would accept a job in the Obama administration. “I can’t tell you. I don’t care to comment on any future job. I’m focused on the job I got, and I want to finish as strong as I can on the challenges that we face.”

Then, without any prompting, Villaraigosa changed the subject by rattling off a stream of random facts about Los Angeles, such as, “Did you know my city’s safer than any time since 1952?”

Of course, he wasn’t there to discuss his own personal plans. Rather, the mayor was there to talk about immigration reform, calling for an immediate overhaul of the nation’s laws and a path to citizenship for millions who have entered the country illegally.

“No human being is illegal. No human being should be illegal. We must enshrine this principle in the heart and soul of this country’s immigration policy,” he said. “That is our moral imperative. That is our political challenge. And 2013 is our time.”

Villaraigosa called for a bill that requires the undocumented to pay back taxes, pass a background check and prove sufficiency in English before receiving citizenship. He wants employers to use an identification system to undercut the under-the-table hiring system used throughout the country today. He said immigration enforcement agents should focus on violent criminals and give those who have not been through the criminal justice system an opportunity to become citizens.

On the topic of working with Republicans to achieve this goal, Villaraigosa pointed to polls after the November election that showed Latinos voting in record numbers for Democrats, a fact he said could move the other party toward a deal on immigration.

“I gotta think that has something to do with all the scapegoating, with the name calling, with the vitriolic nature of the immigration debate, particularly in the Republican primaries,” he said. He later added: “What we saw is a seminal shift in the electorate, and if the Republicans don’t go to the center, they continue to be dominated by the far right. You’re going to see them lose more and more market share.”

Granted, Republicans aren’t sitting on their hands when it comes to immigration reform. Florida Republican Sen. Marco Rubio is working on a proposal to “modernize” the immigration system that could serve as a starting point for talks between the parties. And a handful of Republicans are currently participating in bipartisan talks for a bill that Obama wants to see passed by the summer.

Whether Villaraigosa plays a role in shaping that future when he steps down as mayor in six months still remains to be seen. But from the looks of things, he sure seems to want it.