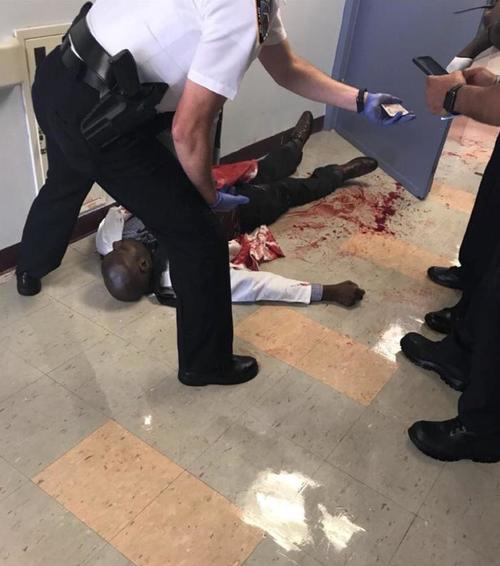 Questions answered about Bronx Hospital shooter Henry Bello (deceased, right): yes, he was an immigrant, that's what the highlighted part below about him being an "international medical graduate student" means.

His shooting up an American hospital qualifies him for our "immigrant mass murder" category. You are not going to read that he was an immigrant in the headline of any MSM source.

However, we've also been told that he was working as a "pharmacy technician". Does that mean that the Bronx Hospital was using him as cheap labor?

After he was fired for sexual harassment, Bello claimed  "racism and discrimination." As I've documented, there are many cases of "disgruntled" blacks making this claim, and following it up with lethal violence.

Finally, he was allegedly seeking one particular victim, and the only one actually killed was a female doctor. So two unanswered questions:

NEW YORK (CBSNewYork) — The gunman who opened fire inside Bronx-Lebanon Hospital Center, killing a female doctor and wounding six other victims before turning the gun on himself has been identified as Dr. Henry Bello, a former hospital employee.

Sources tell CBS2 he resigned in 2015 amid allegations of sexual harassment. He previously worked in family medicine.

Sources say the 45-year-old was searching for one employee before opening fire.

Witness Dione Morales, who said she has been coming to the hospital for 17 years, told CBS2’s Valerie Castro that Bello was let go “because I guess they figured he was unstable.”

“Now look what happened,” she added.

...Sources Bello had a limited permit to practice as an international medical graduate student and was working in family practice – in effect from 2014 to 2016....

Sources say Bello was upset after leaving the hospital, alleging racism and discrimination.