British Woman Feels Like a Stranger in Her Own Neighborhood

In recent weeks, cumulative demographic changes have been reported in Britain, along with white flight away from cities to escape the social conditions created by diverse immigration.

Human beings don’t want diversity and prefer to be around others who speak their language and share the same culture. Most don’t like it when elitist liberal governments decide that the traditional beliefs like patriotism can be fixed by importing a new, more grateful people. Polls from Pew and Ipsos indicate a cross-cultural dislike of having too many foreigners residing in their countries.

In the present example, Jane Kelly, an editor for the Salisbury Review, voices her unhappiness at feeling like a stranger in her own London neighborhood. The only surprise is that she would be brave enough to speak against the new secular religion of diversity being the highest good; in fact, white Britons are now a minority in London.

Below, sign on shops in London’s Acton Vale area indicate its immigration-caused diversity. 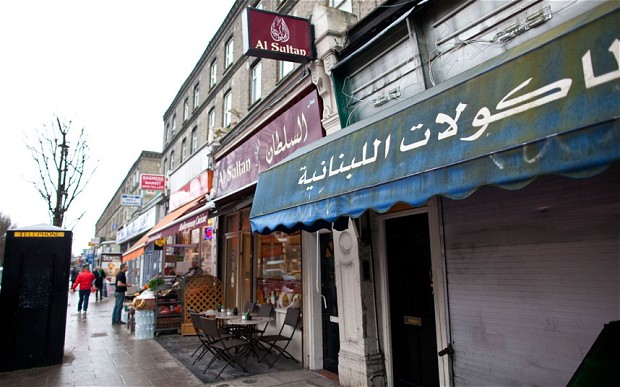 Certainly many Americans have told similar stories about how their pleasant California neighborhoods turned into crime-filled Mexican barrios. Citizens are fleeing the once-Golden State for places where a culturally recognizable America remains.

The mega amnesty now being proposed would open the floodgates to a hugely Mexicanized America.

At least the London writer doesn’t live in an area that has been declared a sharia zone by local Muslims — yet.

As new figures show ‘white flight’ from cities is rising, one Londoner writes a provocative personal piece about how immigration has drastically changed the borough where she has lived for 17 years

“When you go swimming, it’s much healthier to keep your whole body completely covered, you know.” The Muslim lady behind the counter in my local pharmacy has recently started giving me advice like this. It’s kindly meant and I’m always glad to hear her views because she is one of the few people in west London where I live who talks to me.

The streets around Acton, which has been my home since 1996, have taken on a new identity. Most of the shops are now owned by Muslims and even the fish and chip shop and Indian takeaway are Halal. It seems that almost overnight it’s changed from Acton Vale into Acton Veil.

Of the 8.17 million people in London, one million are Muslim, with the majority of them young families. That is not, in reality, a great number. But because so many Muslims increasingly insist on emphasising their separateness, it feels as if they have taken over; my female neighbours flap past in full niqab, some so heavily veiled that I can’t see their eyes. I’ve made an effort to communicate by smiling deliberately at the ones I thought I was seeing out and about regularly, but this didn’t lead to conversation because they never look me in the face.

I recently went to the plainly named “Curtain Shop” and asked if they would put some up for me. Inside were a lot of elderly Muslim men. I was told that they don’t do that kind of work, and was back on the pavement within a few moments. I felt sure I had suffered discrimination and was bewildered as I had been there previously when the Muslim owners had been very friendly. Things have changed. I am living in a place where I am a stranger.

I was brought up in a village in Staffordshire, and although I have been in London for a quarter of a century I have kept the habit of chatting to shopkeepers and neighbours, despite it not being the done thing in metropolitan life. Nowadays, though, most of the tills in my local shops are manned by young Muslim men who mutter into their mobiles as they are serving. They have no interest in talking to me and rarely meet my gaze. I find this situation dismal. I miss banter, the hail fellow, well met chat about the weather, or what was on TV last night.

More worryingly, I feel that public spaces are becoming contested. One food store has recently installed a sign banning alcohol on the premises. Fair enough. But it also says: “No alcohol allowed on the streets near this shop.” I am no fan of street drinking, and rowdy behaviour and loutish individuals are an aspect of modern British ”culture’’ I hate. But I feel uneasy that this shopkeeper wants to control the streets outside his shop. I asked him what he meant by his notice but he just smiled at me wistfully.

Perhaps he and his fellow Muslims want to turn the area into another Tower Hamlets, the east London borough where ‘’suggestive’’ advertising is banned and last year a woman was refused a job in a pharmacy because she wasn’t veiled.

On the other hand, maybe I should be grateful. At least in Acton there is just a sign in a shop. Since the start of the year there have been several reports from around London of a more aggressive approach. Television news footage last week showed incidents filmed on a mobile phone on a Saturday night, in the borough of Waltham Forest, of men shouting “This is a Muslim area” at white Britons.

The video commentary stated: “From women walking the street dressed like complete naked animals with no self-respect, to drunk people carrying alcohol, we try our best to capture and forbid it all.”
Another scene showed hooded youths forcing a man to drop his can of lager, telling him they were the “Muslim patrol” and that alcohol is a “forbidden evil”. The gang then approached a group of white girls enjoying a good night out, telling them to “forbid themselves from dressing like this and exposing themselves outside the mosque”.

Worse, though, is film footage from last week, thought to have been taken in Commercial Street, Whitechapel, which showed members of a group who also called themselves a “Muslim patrol” harassing a man who appeared to be wearing make?up, calling him a “bloody fag”. In the video posted on YouTube last week, the passer-by is told he is “walking through a Muslim area dressed like a fag” and ordered to get out. Last Thursday, police were reported to have arrested five “vigilantes” suspected of homophobic abuse.

There are, of course, other Europeans in my area who may share my feelings but I’m not able to talk to them easily about this situation as they are mostly immigrants, too. At Christmas I spoke to an elderly white woman about the lack of parsnips in the local greengrocer, but she turned out to have no English and I was left grumbling to myself.

Poles have settled in Ealing since the Second World War and are well assimilated, but since 2004 about 370,000 east Europeans have arrived in London. Almost half the populations of nearby Ealing and Hammersmith were born outside the UK. Not surprisingly, at my bus stop I rarely hear English spoken. I realise that we can’t return to the time when buses were mainly occupied by white ladies in their best hats and gloves going shopping, but I do feel nostalgic for the days when a journey on public transport didn’t leave me feeling as if I have only just arrived in a strange country myself.

There are other “cultural differences” that bother me, too. Over the past year I have been involved in rescuing a dog that was kept in a freezing shed for months. The owners spoke no English. A Somali neighbour kept a dog that he told me he was training to fight, before it was stolen by other dog fighters. I have tried to re-home several cats owned by a family who refuse to neuter their animals, because of their religion.

In the Nineties, when I arrived, this part of Acton was a traditional working-class area. Now there is no trace of any kind of community – that word so cherished by the Left. Instead it has been transformed into a giant transit camp and is home to no one. The scale of immigration over recent years has created communities throughout London that never need to – or want to – interact with outsiders.

It wasn’t always the case: since the 1890s thousands of Jewish, Irish, Afro-Caribbean, Asian and Chinese workers, among others, have arrived in the capital, often displacing the indigenous population. Yes, there was hateful overt racism and discrimination, I’m not denying that. But, over time, I believe we settled down into a happy mix of incorporation and shared aspiration, with disparate peoples walking the same pavements but returning to very different homes – something the Americans call “sundown segregation”.

But now, despite the wishful thinking of multiculturalists, wilful segregation by immigrants is increasingly echoed by the white population – the rate of white flight from our cities is soaring. According to the Office for National Statistics, 600,000 white Britons have left London in the past 10 years. The latest census data shows the breakdown in telling detail: some London boroughs have lost a quarter of their population of white, British people. The number in Redbridge, north London, for example, has fallen by 40,844 (to 96,253) in this period, while the total population has risen by more than 40,335 to 278,970. It isn’t only London boroughs. The market town of Wokingham in Berkshire has lost nearly 5 per cent of its white British population.

I suspect that many white people in London and the Home Counties now move house on the basis of ethnicity, especially if they have children. Estate agents don’t advertise this self-segregation, of course. Instead there are polite codes for that kind of thing, such as the mention of “a good school”, which I believe is code for “mainly white English”. Not surprising when you learn that nearly one million pupils do not have English as a first language.

I, too, have decided to leave my area, following in the footsteps of so many of my neighbours. I don’t really want to go. I worked long and hard to get to London, to find a good job and buy a home and I’d like to stay here. But I’m a stranger on these streets and all the “good” areas, with safe streets, nice housing and pleasant cafés, are beyond my reach. I see London turning into a place almost exclusively for poor immigrants and the very rich.

It’s sad that I am moving not for a positive reason, but to escape something. I wonder whether I’ll tell the truth, if I’m asked. I can’t pretend that I’m worried about local schools, so perhaps I’ll say it’s for the chance of a conversation over the garden fence. But really I no longer need an excuse: mass immigration is making reluctant racists of us all.

Jane Kelly is consulting editor of the ‘Salisbury Review’