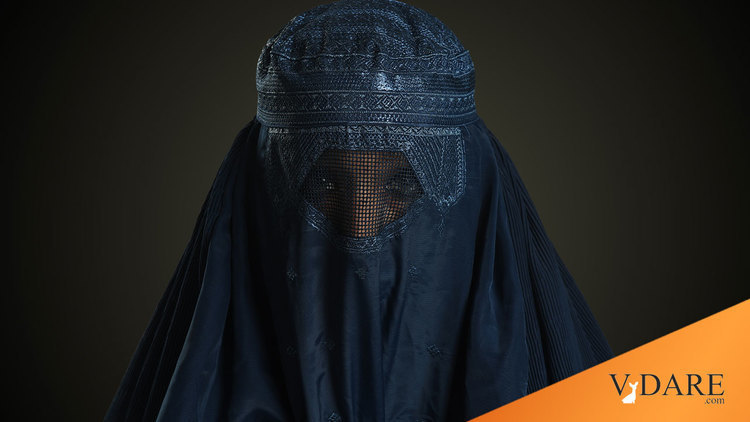 The New York Times reports that Britons are losing their patience with extreme multiculturalism in the form of totally veiled women now living among them.

A leading Labor Party politician, Jack Straw, scolded women last year for coming to see him in his district office in the niqab. Prime Minister Tony Blair has called the niqab a "mark of separation."

David Sexton, a columnist for The Evening Standard, wrote recently that the niqab was an affront and that Britain had been "too deferential."

"It says that all men are such brutes that if exposed to any more normally clothed women, they cannot be trusted to behave — and that all women who dress any more scantily like that are indecent," Mr. Sexton wrote. "It's abusive, a walking rejection of all our freedoms." [ Muslims' Veils Test Limits of Britain’s Tolerance,. New York Times 6/22/07]

It's a standard culture clash article, with remarks like the ones above balanced with Muslim women explaining their voluntary oppression. Interestingly, no British women were asked their opinion about the presence of Muslim women whose behavior insults western freedoms.

In addition, the Times didn't explore the curious psychology of self-oppression. Surely the most extreme form occurs when the abused person willingly participates in the mistreatment. So it is with Muslim women who choose fabric prisons to separate themselves from the western world

Many say it is out of "modesty" to ward off men's unwanted attention. But if that were true, it would not be necessary for the all-encompassing garments to be identical.

No, the true purpose of total veiling is to erase the identity of the individual woman. Such beliefs fit well with Islam-sanctioned polygamy also, where a female is just another interchangeable part.

Of course, if the Senate has its way, we will be seeing enormously more Muslim immigration along with every other kind.