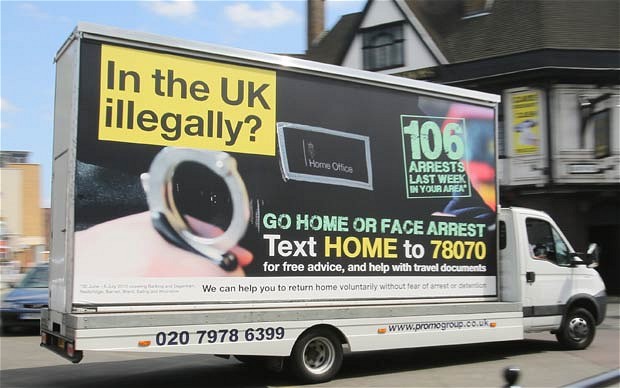 A new campaign is underway in Britain to convince illegal aliens to go home the same way they arrived, namely on their own dime. The content provider is a mobile sign (pictured) that cruises around diverse neighborhoods delivering the message that unlawful foreigners should leave or face arrest.

There’s a helpful phone number on the sign that offers advice, even though successful intruders are highly expert on the topic of illegal penetration, and leaving is even easier.

When candidate Mitt Romney suggested illegal aliens might self-deport, he was widely condemned as being offensive to Hispanic lawbreakers. But seriously, wouldn’t it be more empowering for intruders to arrive home on their own devices, rather than being deported, so they can say they returned for a more honorable reason? Self-deportation might protect the famously touchy Latin male ego.

Unsurprisingly, Al Jazeera found the idea that illegal aliens should leave to be “provocative”:

The Go Home van is a pretty pathetic attempt at immigration enforcement, but the government must want to be seen as doing something. Like most humans, British don’t want their society overrun with invasive aliens, as shown by a 2012 poll in which the number of immigrants was named as the top worst thing about Britain. 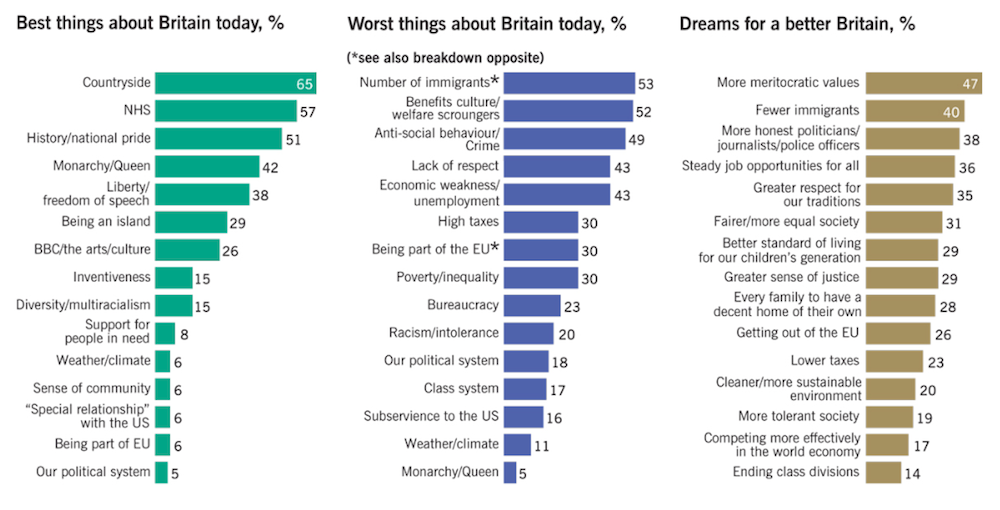 For more information on the normal human dislike for excessive diversity, see the Pew Research paper, World Publics Welcome Global Trade — But Not Immigration. Pollsters at the French company Ipsos have found similar results. People like their own tribe the best — that’s human nature.

Here’s the Telegraph report on the van:

Bringing back exit checks at Britain’s borders would be much better at tackling illegal immigration than the Home Office’s “unsettling” and “aimless” adverts on vans, Nick Clegg has said.

The Deputy Prime Minister said he was “surprised” to hear about two vans sent out by the Home Office displaying adverts demanding that illegal immigrants “go home or face arrest”.

Speaking on BBC Radio 5live, he said it would be much better to bring back identity checks at the border to track when immigrants leave the country.

Mr Clegg said he has personally insisted that this measure will be brought in before 2015, as promised by the Coalition.

The Deputy Prime Minister said he was “hardline” about tough immigration laws but did not like the “tone” of the advertisements commissioned by the department of Theresa May, the Home Secretary.

“You can enforce the law successfully without instilling a tone which is unsettling to communities, particularly to mixed communities,” Mr Clegg told BBC Radio 5live.

“What are we going to have next? Home Office vans driving round saying ‘don’t shoplift’ or ‘don’t steal this car’?”

He denied that Jeremy Browne, a Liberal Democrat minister in the Home Office, had known about the campaign.

Mr Clegg’s intervention comes at a time of growing rows within the Conservatives and Liberal Democrats about immigration policy.

Over the weekend, Dr Cable claimed that the Conservatives were “obsessing” about the total level of immigration, which was leading them to make poor policy decisions. He strongly criticised the Home Office van adverts.

However, the next day, Downing Street claimed the “go home” immigration campaign is “already working” and suggested the scheme could be rolled out across the country.

In his weekly column for The Daily Telegraph on Monday, Boris Johnson warned that those here illegally now have to be asked “bluntly” to leave Britain because there is “virtually no chance” they will be deported.

The Mayor of London also said it is not “racist” to run an advertising campaign asking them to leave, claiming that sophisticated legal teams have been able to thwart attempts to remove illegal immigrants from the country.

He describes the Home Office as running a “de facto amnesty” that has led to thousands of illegal immigrants living and working in Britain without fear of deportation.

He described the adverts as “uncompromising” and admits that the message “could have been more gently drafted”.

However, he went on to suggest that extreme measures may be necessary.

“Illegal immigrants have every opportunity to make their case to remain in Britain, and we have courts full of eloquent Lefty lawyers… taking prodigious sums of taxpayers’ money to vindicate the human rights of their clients,” he said.