There was a striking article in England's MailOnline this weekend.

I am an experienced asylum judge in a major British population centre and you must believe me when I say this: our immigration controls are broken and the country cannot cope. [The true lunacy of our broken asylum system: Judge who rejects most claims despairs at how only a tiny few actually leave Britain; MailOnline, August 20th 2016.]

The author is anonymous: "I am barred from speaking without the permission of the Home Office [=Justice Department, approximately], so today I must remain anonymous and so must the cases I have dealt with."  According to the Mail, he received no payment for the article.

He is writing about Britain, but I have no doubt that much of what he says applies just as well to the U.S.A.

The great majority of the claimants at my tribunals are not attempting to escape persecution at all. They are economic migrants, pure and simple.

Often, the stories they tell me are palpably false and in some cases absurd, and I have 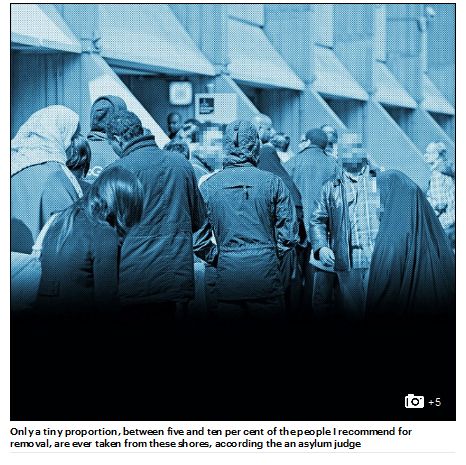 no hesitation turning them down.

Yet – and this is the truly frustrating part – only a tiny proportion, between five and ten per cent of the people I recommend for removal, are ever taken from these shores . . .

It is a straightforward lack of political will. In my view the authorities have concluded that it is simply not cost effective to enforce the law; not that they will admit it.

Nor will they tell the truth about the sheer scale of the problem in the first place.

The writer has some way to go before he can face up to the Lifeboat Ethics that is appropriate to the issue of international migrations:

As it happens, I am politically liberal . . . In the long run, the answer to the immigration explosion is a fairer distribution of resources worldwide.

North African countries, for instance, need access to European markets; they need developed economies and a decent life for their citizens.

Until that happens, those false claimants we do manage to remove will continue to return.

Then we should continue to remove them.

It's a striking piece none the less.  It was picked up and further publicized by the London Daily Express, a flagship newspaper of British nationalism since the glory days of Lord Beaverbrook, and, in its opinion columns, a much more consistent and forceful opponent of Open Borders than the rather ditzy MailOnline.  [Shocking truth of Britain's asylum system as judge warns we are heading for DISASTER by Zoie O'Brien; Daily Express, August 21st 2016.]

The following curious passage got my attention.

People without the proper papers can go below the radar for years. How do I know this?

Partly because of the cases that come before me, but also because of the evidence from the sewage industry – an excellent way of gauging how many people are really living in this country.

The discrepancy between the official figures and what is actually going down the pipes shows there are a million more people in London than are legally registered, and another half a million more outside the capital.

The reason it got my attention is that it brought irresistibly to mind my favorite Turkish proverb: Nerede çokluk, orada bokluk—"Where there are a lot of people, there is a lot of poop."